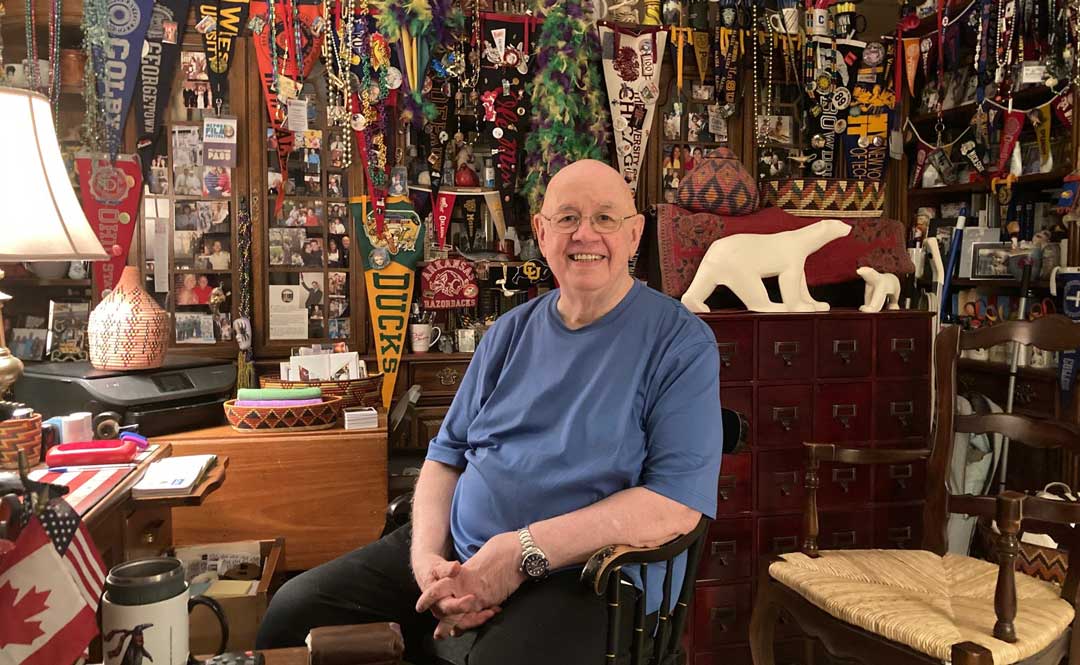 Colby Kullman was a collector of both things and of friends. "He touched thousands and thousands, always remembered who helped and supported him, and he always gave back," said Richard Herzog, of his father, pictured here in his home office.

To his friends and family, University of Mississippi professor emeritus Colby H. Kullman, who died on Aug. 9, was a one-of-a-kind human being who touched the lives of thousands of students during his tenure in the Department of English.

“He was like Halley’s Comet – he shined like it – and was unique and selfless,” said Richard Herzog, Kullman’s adopted son. “He lifted as he climbed. He never sought the limelight or accolades, but he was very benevolent, always making time for others and giving back.”

Born in Bronx, New York, in 1945, Kullman came to the university in 1984 to teach modern drama, expository writing and 18th-century British literature. The then 39-year-old credited UM for “rescuing him” by offering him a tenure-track position.

A renowned Tennessee Williams scholar, Kullman’s work included editing the two-volume reference work Theatre Companies of the World and interviewing playwright Arthur Miller for a special edition of the Michigan Quarterly Review, celebrating Miller’s “Death of a Salesman” at 50.

Caroline Wigginton, UM Department of English chair and associate professor, praised Kullman’s scholarship on Williams and noted he was highly regarded in his field.

“Dr. Kullman was a well-known and respected faculty member not only here in the UM English Department or at the university but throughout the profession,” Wigginton said. “One of my regrets is that I came to the university too late to work with him.

“However, I know that he was wonderful and amazing to his students because he is the faculty member our alumni always mention or ask about whenever they visit. I can only hope to have a career and a life that is half as transformative to the lives of others as his was.”

“Beloved” is the word both Wigginton and fellow distinguished professor of English Jay Watson used to describe Kullman.

“It’s one thing to say a professor is popular with students. It’s another thing to say he’s beloved. Colby was truly beloved,” said Watson. “He loved his students, and they loved him. That was just so out front, it helped you keep your own eyes on the prize as a teacher: The students are what it’s all about.”

In recognition of his dedication to students, which extended beyond the classroom, Kullman was named the UM Liberal Arts Teacher of the Year in 1995 and the Elsie M. Hood Outstanding Teacher in 1997 among other accolades.

“I was never his student in class, but he cheered me on as I finished my coursework and offered wonderful, positive encouragement as I worked on my book just because he was kind and wanted others to succeed,” said Phillip Gordon, who earned a master’s in liberal arts 2008 and a Ph.D. in English from the university in 2013.

“I always particularly loved the parties Colby hosted during the annual Faulkner Conference and his involvement with Faulkner on the Fringe,” Gordon said, associate professor of English and gay studies coordinator at the University of Wisconsin-Platteville. “For the latter, I think he just enjoyed letting others feel seen and heard and having outlets for their creativity. He was just a splendid human being.”

Ole Miss alumna Anne Lampkin Kramer, who did have classes with Kullman between 2006-2010 during her undergraduate and graduate time at the university, remembered his infectious joy and unmatched love for his students.

“He was my Morrie. I am not unique in that,” said Kramer, an English instructor at Northeast Mississippi Community College in Booneville, Mississippi. “He gave his exceptional love, encouragement and attention to so many. His light will continue to shine.”

Kullman’s light is continuing to shine thanks to the special bond he shared with another former student, the late Lori Sneed.

In 2018, Sneed’s parents John B. “Shorty” and Patti Sneed of Gulfport, Mississippi, linked the two in perpetuity by establishing the Lori Sneed Council Scholarship Endowment in Honor of Colby H. Kullman, Professor Emeritus to memorialize their daughter, who passed away in 2017, and to recognize Kullman’s influence in her life.

“We are deeply honored that Colby allowed us to honor him along with Lori because he was her favorite teacher, without a doubt,” said Shorty Sneed in an interview in 2018.

The Ole Miss Women’s Council Scholarship is awarded to students pursing an English major at Ole Miss, and, in 2019, Kullman served as a mentor for the scholarship’s first recipient.

“Colby always made time, and he always remembered and did for others,” said Herzog of Nashville, Tennessee. “He visited with so many friends and former students, was always going to lunch or to dinner with them and frequently had guests coming in to stay with him. He gave everything he got every day.”

Kullman served on the boards of the Ole Miss Retirees Association, Friends of the John D. Williams Library at Ole Miss and the Yoknapatawpha Arts Council, which supports Theatre Oxford, the city’s community theater group.

“Colby was a generous, humble and eternally positive person,” said Kate Hooper, UM faculty member and Theatre Oxford president. “His extensive knowledge of theater, passion for community and ability to foster growth enhanced Theatre Oxford and the greater theater community. We will miss seeing his smile, but his laughter will echo in our hearts.”

For Herzog, Kullman, who he called “Pop,” was his greatest champion.

“I can only encourage everyone who knew and loved him to use him as a role model,” Herzog said. “If we can try to emulate him, the world will be a better place.”

A memorial service for Kullman is scheduled for Oct. 9 at 1 p.m. at the Paris-Yates Chapel on the UM campus. A reception will follow at Johnson Commons.

Memorials may be made to the to the Lori Sneed Council Scholarship Endowment in Honor of Colby H. Kullman, Professor Emeritus, and in his name to the University of Mississippi Foundation to support graduate fellowships in the UM Department of English. Checks may be mailed to the University of Mississippi Foundation, with the fund written in the memo line, to 406 University Ave., Oxford, MS 38655.