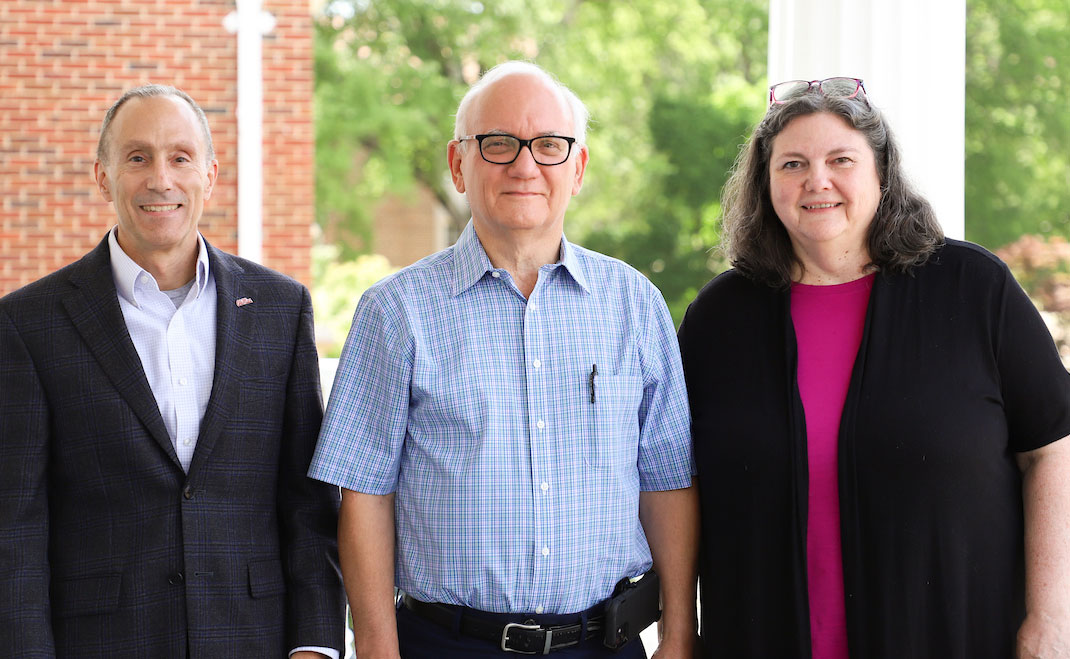 An anonymous donor is providing funding for the CIS Outstanding Student Award Endowment to bring attention to the remarkable work being done by Computer and Information Science students at Ole Miss. In addition, the gift honors Dawn Wilkins, right, retiring chair of the Department of CIS, and Conrad Cunningham, center, the former CIS chair. With them is David Puleo, left, dean of the School of Engineering, which is home to CIS.
Photo by Kirsten Simpson/UM Development

For five decades, students in the Department of Computer and Information Science (CIS) at the University of Mississippi have been finding solutions to real-world problems and developing innovative computer software.

These achievements and the School of Engineering students making them will soon be getting additional recognition and funds thanks to the new Computer and Information Science Outstanding Student Award Endowment created by a $52,000 gift from an anonymous donor.

“We appreciate how this endowment enables the CIS department to recognize and reward our computer science students for their exceptional accomplishments,” said David Puleo, dean of the School of Engineering.

The donor looks forward to the department using this annual award to bring attention to the outstanding work being done by CIS students and to provide those recognized with some financial resources to offset some of their college expenses.

“Ideally, other School of Engineering alumni and friends will consider supporting this new fund with additional gifts that will enhance the award’s impact,” the donor said.

“It’s rewarding to see that the donor established this fund to honor professors Cunningham and Wilkins because their combined nearly 60 years of service to the university and over 20 years of leadership of the department are remarkable,” said Puleo.

The anonymous donor, who notes that they and their family are “proud UM alumni,” praised the enormous improvements that have taken place within the CIS department while Wilkins and Cunningham served as chairs.

“Under the leadership of Dr. Cunningham and Dr. Wilkins, the computer and information science department has grown into a nationally recognized program,” the donor said. “They should be recognized for their hard work to make this happen. The University of Mississippi is indebted to them.”

In 2015, Wilkins became the first female department chair in the UM School of Engineering. During her tenure as chair, the CIS department has added faculty and expanded course offerings and emphases, such as computer security and data science.

After working at UM’s School of Engineering for 27 years, Wilkins will retire at the end of June and return to her hometown of Springfield, Illinois. She started as an assistant professor in the CIS department before being promoted to professor. She became chair of the department seven years ago.

“While many things have changed in Oxford and on campus during my time here, it still has the same small-town, small-university, everybody-knows-everybody feeling that I love,” Wilkins said. “Retiring is bittersweet. I will enjoy being near family again but will miss my friends, colleagues and students here.”

Having the new CIS Outstanding Student Award created in her and Cunningham’s honor was an unexpected, but especially meaningful gesture by everyone involved, she said.

“I am extremely humbled by the generosity of the donor and grateful for the support for the department,” Wilkins said.

Before Wilkins became chair, Cunningham is credited with leading the department to new heights during his 14-year tenure as CIS chair. While he has been retired from UM as a full-time faculty member for three years, Cunningham is still very much involved with the department and continues to serve as professor emeritus and chair emeritus.

This new endowment provides faculty members with another tool that will benefit their students, Cunningham said.

“One of the characteristics that first attracted me to join the CIS department as an assistant professor in 1989 was its focus on its students,” he said. “The faculty has long sought to encourage academic, professional and personal excellence among its students. This new endowment can help the faculty continue to do so by further incentivizing and recognizing excellence.

“The donor is a great friend of the department,” Cunningham said. “With this generous gift, the donor helps enable the department to maintain its student-focused culture as its mission evolves dynamically to meet the needs of Mississippi and the computing discipline. I welcome having my name associated with this important goal and sharing this honor with my faculty and staff colleagues.”

The Computer and Information Science Outstanding Student Award Endowment is open for gifts from individuals and organizations. Checks can be sent to the University of Mississippi Foundation, with the endowment’s name written in the memo line, at 406 University Ave., Oxford, MS 38655; or online at https://give.olemiss.edu.

To learn more about providing support to the UM School of Engineering, contact Greg Carter, associate director of development, at gjcarter@olemiss.edu or 662-915-1849.