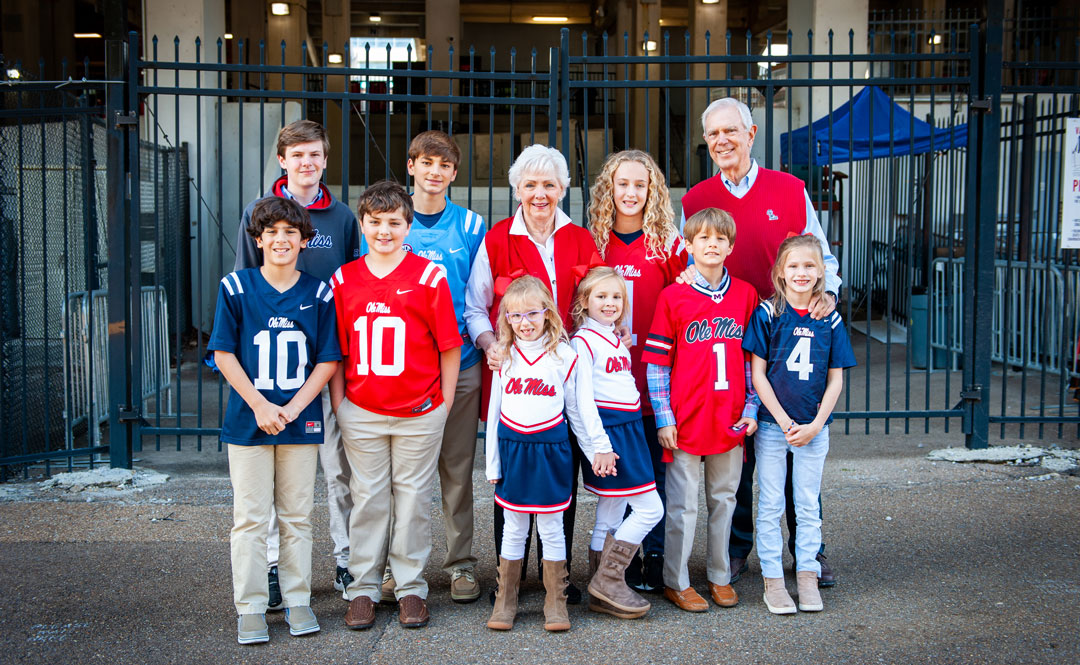 Cindy and Bob Seibels of Montgomery, Alabama, pictured here with their grandchildren, made a gift to Giving Day to establish the Seibels Scholar program for the Center for Innovation and Entrepreneurship in the School of Business Administration. Cindy and Bob Seibels both are Ole Miss alums, and their three sons all graduated from the Business School.
Photo by Bill Dabney/UMF

A family with deep Ole Miss roots and a tradition of giving stretching back decades joined the Giving Day effort with a gift to establish a new scholarship program at the University of Mississippi School of Business Administration.

Bob and Cindy Seibels graduated from UM in the late-1960s with degrees in mathematics and education, respectively. They settled in Montgomery, Alabama, where Bob Seibels launched his career in finance and began giving back to their alma mater when their three boys were very young.

The new Seibels Scholars program in the Center for Innovation and Entrepreneurship is perhaps their most meaningful contribution to date, Bob Seibels said.

“My son Emmet had been involved with the CIE and was very impressed with the work they’re doing to encourage students to launch businesses and suggested that I support their mission,” Seibels said. “Cultivating innovation and entrepreneurship in our business students can be life-changing for them and for everyone they uplift with their ideas. I’m very excited about the opportunities CIE is bringing to our students.”

The Seibels’ gift was part of Giving Day, a social media-heavy fundraising event that took place April 5. Giving Day lasted for one day, eight hours and 48 minutes in honor of UM’s founding in 1848. The first Giving Day at UM, which was held in 2019, secured almost $550,000, and the event has grown in the years since.

The Seibels have supported academic units across campus, the arts, student scholarships, facilities and athletics over the years, and Bob Seibels served as president of the Ole Miss Alumni Association.

Their sons, Emmet, William and Ryan, all graduated from the UM School of Business Administration in 1996, 1999 and 2002, went on to earn MBAs at Harvard and Vanderbilt, and have continued their parents’ tradition of giving to strengthen Ole Miss.

Clay Dibrell, co-director of the CIE and a UM business school professor, said the Seibels family is a great example of how entrepreneurship and the entrepreneurial spirit can benefit families and their communities.

“We are excited about Bob and Cindy’s generous gift to create the Seibels Scholars program,” Dibrell said. “Students who qualify for this scholarship are those who are either entrepreneurship majors or minors and apply what they learn in the classroom by competing in our fall business model and spring Gillespie Business Plan competitions.

“The goal is to attract motivated students who want to change the world through entrepreneurship.”

For more information on ways of supporting the university, go to https://give.olemiss.edu.