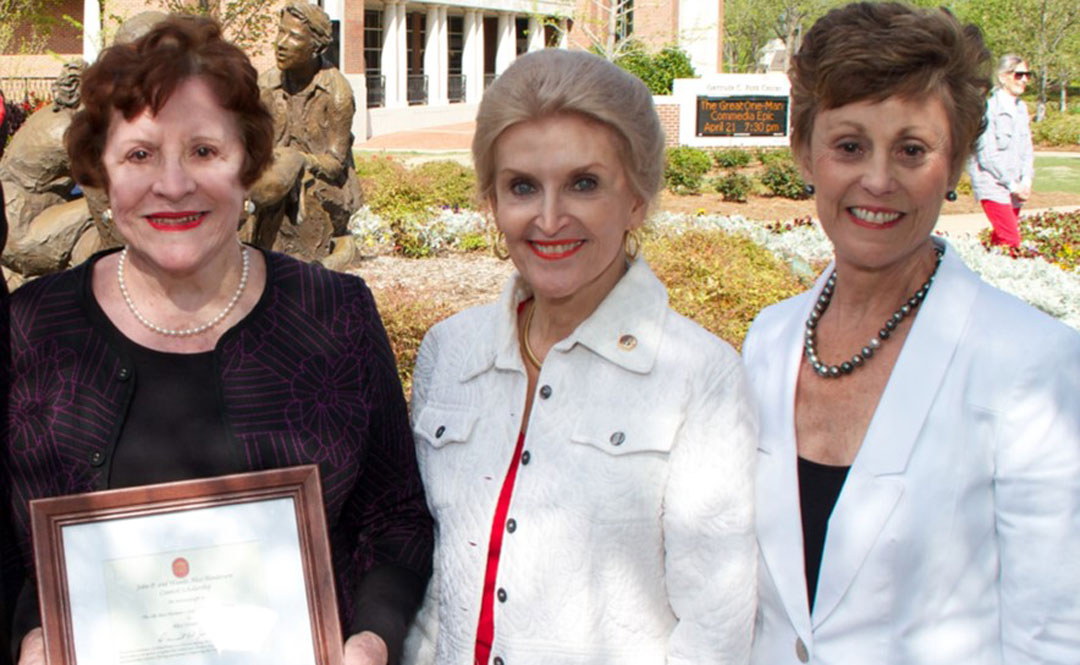 The late Alice Henderson, at left, directed a $3.1 million estate gift to the University of Mississippi Foundation, after previously funding an Ole Miss Women’s Council Scholarship and an Ole Miss First Scholarship. Pictured here with Henderson at the Rose Garden dedication of her OMWC Scholarship are Jan Farrington, center, and Mary Ann Frugé, both members of the OMWC.

For 37 years, the late Alice Henderson of Jackson, Mississippi, supported the University of Mississippi with funds for scholarships. Now her $3.1 million estate gift further illustrates her devotion to strengthening her alma mater.

The gift is directed to the John P. and Wanda Alice McKee Henderson Endowment, an unrestricted endowed fund for the general use of the University of Mississippi Foundation. Combined with the former gifts from Henderson and her late husband, John, the couple’s impact on Ole Miss totals more than $3.9 million.

Wendell Weakley, president and CEO of the UM Foundation, expressed appreciation for the estate gift providing permanently endowed funds to the foundation. While the university thrives as a higher education environment, the UM Foundation operates as a supporting business attracting, managing and investing private resources.

“With more than half of the current management/development fee revenue generated by the foundation being used to fund university activities, the Hendersons’ generous gift moves us even closer to a goal of being fully endowed. A fully endowed foundation would allow all revenue generated to be used to address the greatest needs of Ole Miss. We greatly appreciate their generosity, thoughtfulness and trust.”

A Mississippi native, Alice Henderson attended Millsaps College and then graduated from Ole Miss, where she was active in the Chi Omega sorority. Her late husband, a Texas native, earned his college degree at Trinity University. His alma mater has been a beneficiary of their giving as well as First Baptist Church of Jackson and the New Orleans Baptist Theological Seminary.

“John did not jump into anything,” Henderson once said of her late husband. “He gave a great deal of thought to everything he did, and he felt our gifts should help his alma mater, my alma mater and the church. Naturally, I am really thrilled and pleased that he thought so much of my alma mater.”

In addition to the endowment supporting the UM Foundation, they created an Ole Miss First Scholarship in 2005 and an OMWC Scholarship endowment in 2012, with both assuring recipients receive financial assistance, mentoring and leadership training.

“After we established the Ole Miss First Scholarship, we enjoyed hearing from all the students who received assistance,” said Henderson, who also shared the inspiration guiding her gift to the OMWC Scholarship.

“I’m really pleased to create this scholarship in our names, and more importantly, I know John would be pleased that we will continue to help young people earn college degrees,” said Henderson, who earned a degree in education while on the Oxford campus. “Nowadays young people have to have such strong educational foundations to do well in the world, and you can’t receive a more wonderful foundation than at Ole Miss and then have the benefit of great alumni networking.”

Jan Farrington of Jackson, a longtime friend of the Hendersons and a founding member and past chair of the Women’s Council, expressed appreciation for their support.

“Alice Henderson was one of those sweet, bright spirits who exuded positive, good feelings all the time,” said Farrington. “When Alice and John established an Ole Miss First Scholarship and provided other support, no one was surprised because it was typical of their ever-present willingness to help others.

“After John’s death, Alice continued to give and provide for Ole Miss students. We are so grateful for all of the Hendersons’ generous gifts, but we especially appreciate Alice’s legacy of continued philanthropy. Her generosity will give future deserving students the opportunity to attend this university and be part of our ever growing, ever improving, already outstanding programs,” she said.

The Hendersons were loyal UM benefactors. Their other gifts were directed to a membership in the Chancellor’s Trust (another unrestricted fund) as well as support for the Ole Miss Associates, School of Education, Alumni Center renovation and the University Museums and Historic Houses.

“It was a great privilege to have a longtime, close relationship with the Hendersons,” said Sandra Guest, retired vice president of the UM Foundation. “They always inspired me through the extraordinary kindness they showed one another as well as to others ― a beautiful quality that has really defined their lives. Mr. Henderson was such a thoughtful spouse and put great effort into planning how to take care of his wife and the valued institutions in their lives. We are grateful for the gifts they entrusted to us and for the exceptional way they lived their lives.”

John Henderson was an executive with Exxon Mobil Corp. for some 44 years in Texas and Louisiana, providing expertise in the areas of refinery, exploration and production. Exxon Mobil has a matching gifts program, so the Hendersons’ contributions to Ole Miss were enhanced by that initiative. Henderson also served in the U.S. Navy during World War II.

Alice Henderson taught third grade for one year before moving to New Orleans, Louisiana, to work for Chevron. She met her husband there, married in 1967 and retired in 1981 to her hometown of Jackson.

The John P. and Wanda Alice McKee Henderson Endowment is open to support from organizations and individuals. Gifts can be made by sending a check to the University of Mississippi Foundation, with the fund’s name noted on the memo line, to 406 University Ave., Oxford, MS 38655 or by giving online at https://give.olemiss.edu.