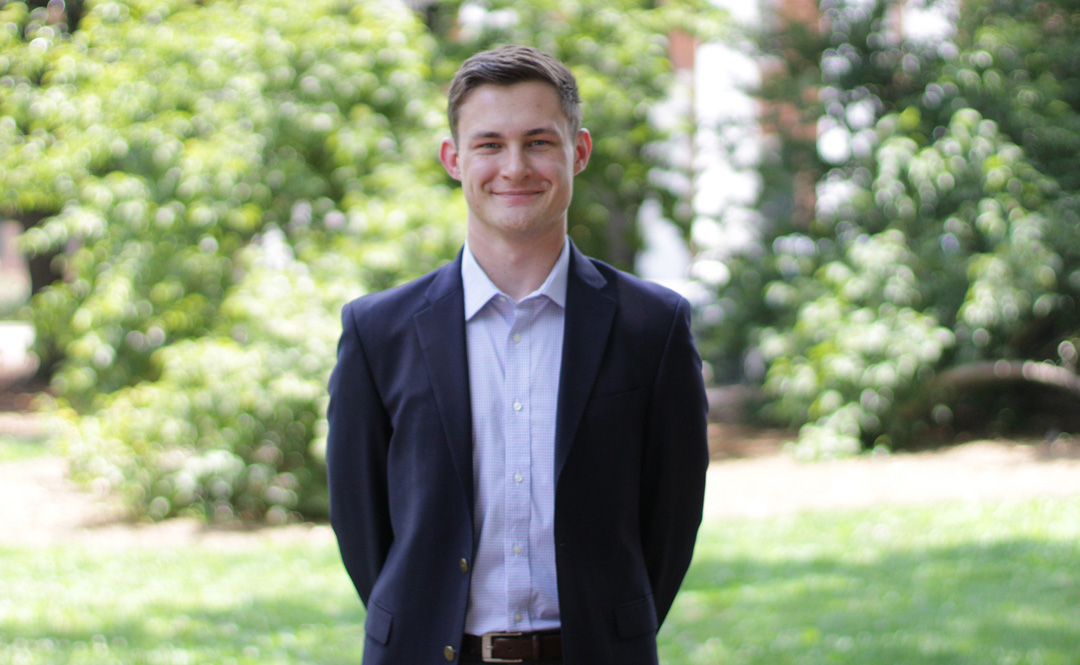 Cole Barnhill, the current recipient of the Zach McClendon Memorial Assistantship, serves the program as vice president of recruitment.

Zach McClendon had just completed his first semester as a Master of Business Administration student at the University of Mississippi in fall 2013 when he was killed during a robbery at his home.

In 2016, the university’s MBA board of directors worked with the UM Foundation to establish the Zach McClendon Memorial Assistantship Endowment to honor his memory. Since then, six recipients – Monique Ma, Ferderica Cobb, Corbitt Chandler, Cindy Pan, Heath Rooks and Tsering Tashi – have completed the assistantship program to pursue their dream occupations.

The current recipient, Cole Barnhill, was an accomplished undergraduate student at the university and serves as vice president of recruitment for the program.

The recipients all reflect the drive and character that McClendon exhibited, said Ashley McGee, director of MBA administration.

“I first met Zach when he was considering our program,” McGee said. “During his campus visit, I knew within a few minutes of our conversation that Zach was an individual that sought success. Immediately, I was impressed by him and his professionalism.”

Originally from Gulfport, McClendon received his undergraduate degrees in chemistry and biochemistry from Williams College in Massachusetts and in biology and medical sciences from Mississippi College. He planned to continue his education at the University of Mississippi Medical Center in Jackson after completing his MBA.

“We’ve picked people that exemplify the spirit of Zach,” said Scott Taylor, past president of the MBA Alumni Board, who helped establish the endowment. “We have found great recipients that would make him proud and his family proud.

“Now they are going off and doing great things to represent not only the memory of Zach but the Ole Miss MBA program.”

“Monique is very impressive,” said Charles Vianey, past president of the MBA Alumni Board and another key participant in establishing the memorial. “She had a musical background, was strong in mathematics and strong academically all around. She lives up to the spirit of Zach even to this day.”

Ma moved to Nashville in 2017 to work for Warner Music Group as a sync licensing analyst. Recently, she was promoted to senior manager.

“Having been our first one, she was the perfect candidate at the perfect time,” Taylor said. “She knew what her dream job was going to be, and went off and got it. She’s done such amazing things in Nashville.”

Cobb, who was awarded the assistantship in 2017, works as a digital marketing specialist for Envision in Jackson.

“While working as a graduate assistant for the MBA office and serving as the class vice president of communications and public relations, I was able to gain valuable experience that translated to my marketing career,” she said.

Cobb graduated with a bachelor’s degree in integrated marketing communications while serving as an Ole Miss Ambassador, Daily Mississippian reporter and a member of the Phi Eta Sigma national honor society.

“Just as Zach McClendon was known for his spirit and enthusiasm, I’ve strived to bring passion and dedication to every marketing campaign on which I’ve worked,” she said.

The third recipient, in 2018, Chandler graduated from Ole Miss in summer 2019 with an MBA after earning his bachelor’s degree in risk management at the University of Georgia.

“Each of these students possesses a unique set of traits,” Vianey said. “We look to find recipients that are strong students academically but that also have a strong character.”

During his assistantship, Chandler envisioned himself becoming a top executive at an insurance company. Since then, he has been an associate at Starr Cos.’ Property Division, an investment and insurance organization in Atlanta.

In 2019, the board was impressed with two outstanding candidates. It had sufficient funds to support another position and decided to recognize both students, Pan and Rooks.

Pan is enrolled as a second-year Ph.D. student in the Ole Miss finance program, and Rooks is a system marketing coordinator at Baptist Memorial Health Care in Memphis.

“I believe that my current role as a lifelong learner, and being a pillar of support for those around me, has allowed me to continually reflect Zach’s spirit and enthusiasm,” Pan said. “I am grateful for the opportunities that this distinguished assistantship has provided me and will continue to exemplify Zach’s outstanding character.”

Before receiving his MBA in August 2020, Rooks was involved in the Beta Gamma Sigma business honor society, National Society of Collegiate Scholars and the UM business school’s Chief Emissary Officers before graduating with a bachelor’s degree in marketing.

In his job, Rooks spends much of his time managing and assisting the marketing efforts for hospitals and various service lines.

“I believe my assistantship helped me get where I am today,” Rooks said. “By teaching me how to manage both my classwork and client relations amongst both our MBA office and external alumni board members, I believe that Zach McClendon’s spirit has been reflected in my actions since beginning my career in the health care field at Baptist.”

The 2020 McClendon recipient, Tashi has committed himself to improving the teaching processes in Nepal. After narrowing down career interests to investment banking and strategy consulting, Tashi is enrolled in consulting preparation courses in addition to preparing for the Securities Industry Essentials exam.

“As an assistantship recipient, I feel like I am chosen to show leadership and commitment wherever I live, work and study,” Tashi said. “As a result, this always keeps me humble and committed to good causes.”

Current McClendon recipient Barnhill, from Union, Kentucky, received his degree in management from Ole Miss in May 2021. As an undergraduate student, he served the school as a chief emissary officer, and the university as president of the Interfraternity Council as well as an Ole Miss Ambassador.

For the MBA program, Barnhill serves as class vice president of recruitment.

“I have had the pleasure to work closely with Cole over the past year,” said Andrew Nail, president of the MBA Alumni Board. “He is an impressive young man who is going to do great things when he completes the program.

“I look forward to following his professional journey, as I know he will make a tremendous impact in whatever he choses to do after graduation.”

The Zach McClendon Memorial Assistantship Endowment gives its recipients an opportunity to create relationships while gaining valuable experience alongside the board.

“All candidates bring a different dimension,” Vianey said. “We’ve always looked for somebody special that can bring a unique experience and perspective to the program that exemplifies the spirit of Zach.”

The Zach McClendon Memorial Assistantship Endowment is open to support from organizations and individuals. Gifts can be made by sending a check, with the fund’s name noted on the memo line, to the University of Mississippi Foundation, 406 University Ave., Oxford, MS 38655, or by giving online at https://www.umfoundation.com/McClendon.

For more information on supporting the University of Mississippi, contact Nikki Neely Davis, Director of Development, at nlneely@olemiss.edu or 662-915-6678.