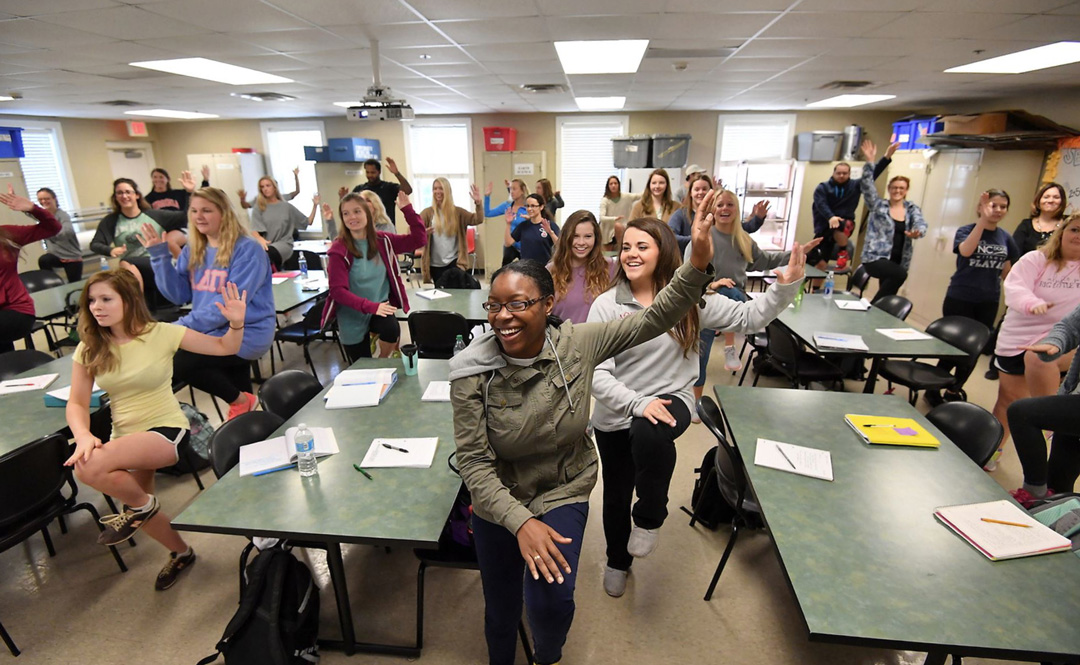 Students in EDWP 340: Integrated Music and Movement for the Elementary Classroom get up and get moving to a video presented by Mississippi's Move to Learn initiative. The course is part of a 12-hour endorsement in wellness and physical activity offered to elementary education majors in the School of Education.
Photo by Robert Jordan

An estate gift to the University of Mississippi will ultimately provide scholarships for students in the schools of law, education and medicine.

The gift’s benefactors are the late Taylor Webb, a 1950 graduate of the Ole Miss Law School, and his wife Sue Webb of Leland, Mississippi.

“My husband and I never had children, so we decided a number of years ago to make a gift to Ole Miss after our lifetimes,” said Sue Webb, a Taylor, Mississippi, native who grew up in Oxford. “We decided it would be divided between the School of Law and the School of Education because Taylor practiced law and also believed very strongly in public education.”

Taylor Webb practiced law for 40 years, focusing on estate and land title litigation. His wife worked as his secretary all those years, and they retired together in 1990.

“We are so grateful for this support as it will allow us to attract the best and brightest students to our law school,” she said. “I want Sue to know that the couple’s invaluable gift will have a long-lasting, positive effect on our students, their communities and ultimately our world.”

“On behalf of the School of Education, I’m so grateful to the Webbs for this gift,” said Dean David Rock. “Such private support truly changes the course of young people’s lives, and we are ever thankful for our donors’ devotion and vision.”

When Taylor Webb passed away in July 2017, Sue Webb decided to include the University of Mississippi Medical Center in their estate plans.

“I’m very encouraged by the things I read about UMMC and I think the state of Mississippi needs a good teaching hospital like that,” she said.

Dr. Loretta Jackson-Williams, vice dean for medical education at the School of Medicine, said UMMC — the state’s only academic health sciences center — relies on the generosity of donors.

“Gifts, such as this one from the Webbs, open opportunities for students who are training to be tomorrow’s health professionals. We greatly appreciate their thoughtful generosity in sowing into the lives of future physicians,” she said.

Taylor Webb became an Eagle Scout at the age of 13. At 17, he left high school after his senior football season to walk on as tight-end for the Ole Miss Rebels. He was soon drafted by the U.S. Army to play football in Japan during World War II, serving in that capacity for three years.

Returning home, he graduated at 22 from law school and, throughout his career, served in various positions with the Mississippi Economic Council and other organizations. Since the 1960s, he advocated for public support of education as the solution to Mississippi’s economic and social problems.

The Gillsburg, Mississippi, native grew up in Leland and always had a project going, his wife said. When their house was under construction, for example, he used the carpenters’ scaffolding to paint the home himself. He later added on a room and discovered walnut paneling for sale in Missouri, which he brought home to be installed in their great room. He bought an old water tower, cut it down to about five feet and added utilities to fashion a hot tub for the couple’s back yard.

“I’m 5-foot-9 and it was wide enough for me to swim one lap across. That’s how big it was,” Webb said. “He just always did things like that.”

Taylor Webb had rental property in Oxford and a 75-acre pecan grove that he harvested behind their Leland home. He loved hunting, but stopped when he killed a trophy deer. He loved tennis, but stopped playing when he beat the two best singles players in Washington County.

He also had a pilot’s license. Though his wife never flew with him, she always joined him on their many road trips throughout the United States and Canada, even driving together as far as Alaska, Key West, Seattle and San Diego on different trips.

“I cannot stress enough what a remarkable person he was. I know I was very fortunate to be married to him. We had a fun life; we really did,” Sue Webb said. “We had a storybook life.”

“I hope our gift will offer students an opportunity to accomplish what they want to in life,” Webb said. “I hope it will provide for someone, or several someones, to be teachers in elementary or secondary school and certainly practice law. Additionally, I want our gift to help healthcare students continue to experience the hands-on training that UMMC provides.”

For information on estate planning to support the University of Mississippi, contact Daniel Wiseman, senior director of gift planning, at daniel@olemiss.edu or 662-915-7601.