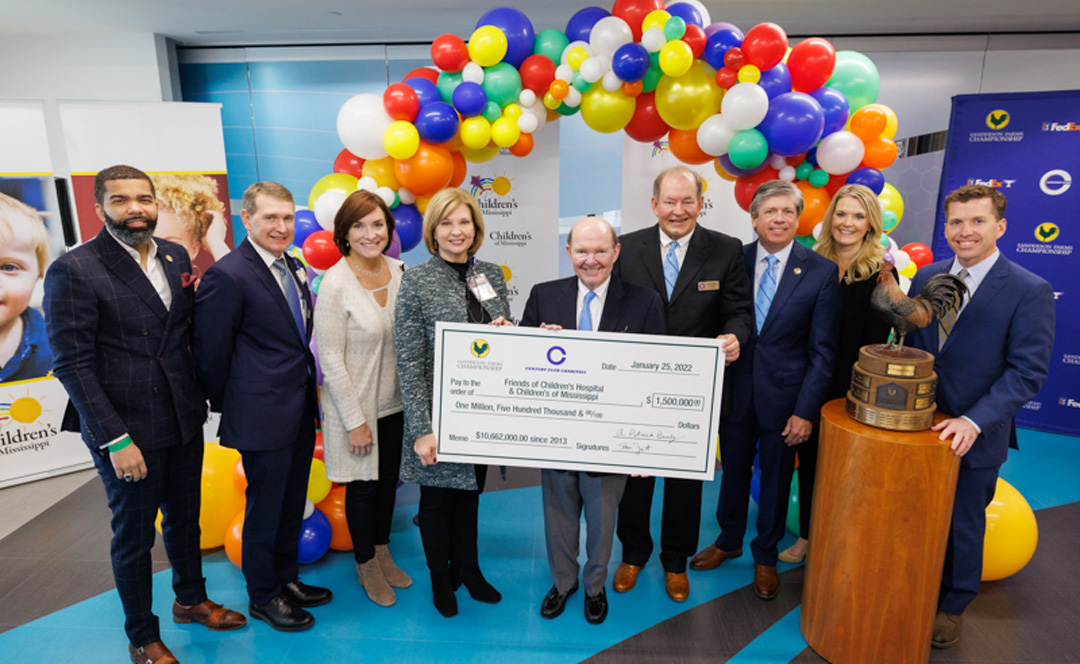 The host organization of the Sanderson Farms Championship made a record-breaking $1.5 million donation to benefit Mississippi’s only hospital for children.

Century Club Charities made the donation from proceeds of the state’s only PGA TOUR event during a news conference today at Children’s of Mississippi’s Kathy and Joe Sanderson Tower on the campus of the University of Mississippi Medical Center.

The donation to Friends of Children’s Hospital will go toward the Campaign for Children’s of Mississippi, which made the seven-story hospital expansion possible. The Sanderson Tower, opened in November 2020, more than doubled the square footage dedicated to pediatric care on the UMMC campus.

“We say it’s all about the children,” said Century Club Charities President Pat Busby, “but it’s also about their families and the dedicated doctors, nurses, staff and students who provide miraculous care 24 hours a day, 365 days a year. That’s why we’re here.”

Children’s of Mississippi, which includes the children’s hospital as well as clinics around the state, cares for nearly 200,000 children a year.

“When Sanderson Farms took on the responsibility of this golf tournament, it was about this,” Sanderson Farms CEO and board chairman Joe Sanderson Jr. said of the presentation. “It was about the babies and the mothers and dads who come through these doors with fear and anxiety. They meet a doctor, nurses and staff, and some time later, a lot of them leave with a smile and hope for the future.”

Thousands of children have received care inside the Sanderson Tower since its opening. This includes more than 1,000 babies starting life in its NICU floors, and more than 1,000 children who have received pediatric intensive care. Nearly 9,000 surgeries have been performed in the tower’s operating rooms, and scans performed in the pediatric imaging center number almost 70,000.

John Scarbrough, board chairman of Friends, said the partnership with Century Club Charities has fueled Friends’ mission to support Children’s of Mississippi.

“Since the partnership with Century Club Charities, we’ve been able to accelerate our mission as an organization so much more quickly,” he said. “On behalf of Mississippi’s youngest patients, thank you for your continued partnership and dedication to improving the health of the state, one child at a time.”

“In the awards that the Sanderson Farms Championship has won and the recognition it has garnered in the world of professional golf, it is a success,” she said. “The tournament is also a success in bringing a lot of people together around a common goal. That’s significant, that so many people came together to support the tournament, Friends, Century Club Charities, and this children’s hospital.”

Friends of Children’s Hospital pledged $20 million to the Campaign for Children’s of Mississippi, which is chaired by the Sandersons. The couple launched the campaign in 2016 with a $10 million personal gift. Since then, the campaign has raised more than 94 percent of its $100 million goal through donations of all sizes.

Steve Jent, executive director of the tournament, thanked the many volunteers and fans who support the Sanderson Farms Championship each year.

“The fan base, combined with the continued support of Sanderson Farms, our sponsors and Century Club members, along with the hard work of our volunteers and staff, allowed us to create another special year for our charities,” he said.

The 2022 Sanderson Farms Championship is set for Sept. 26 to Oct. 2 at the Country Club of Jackson.