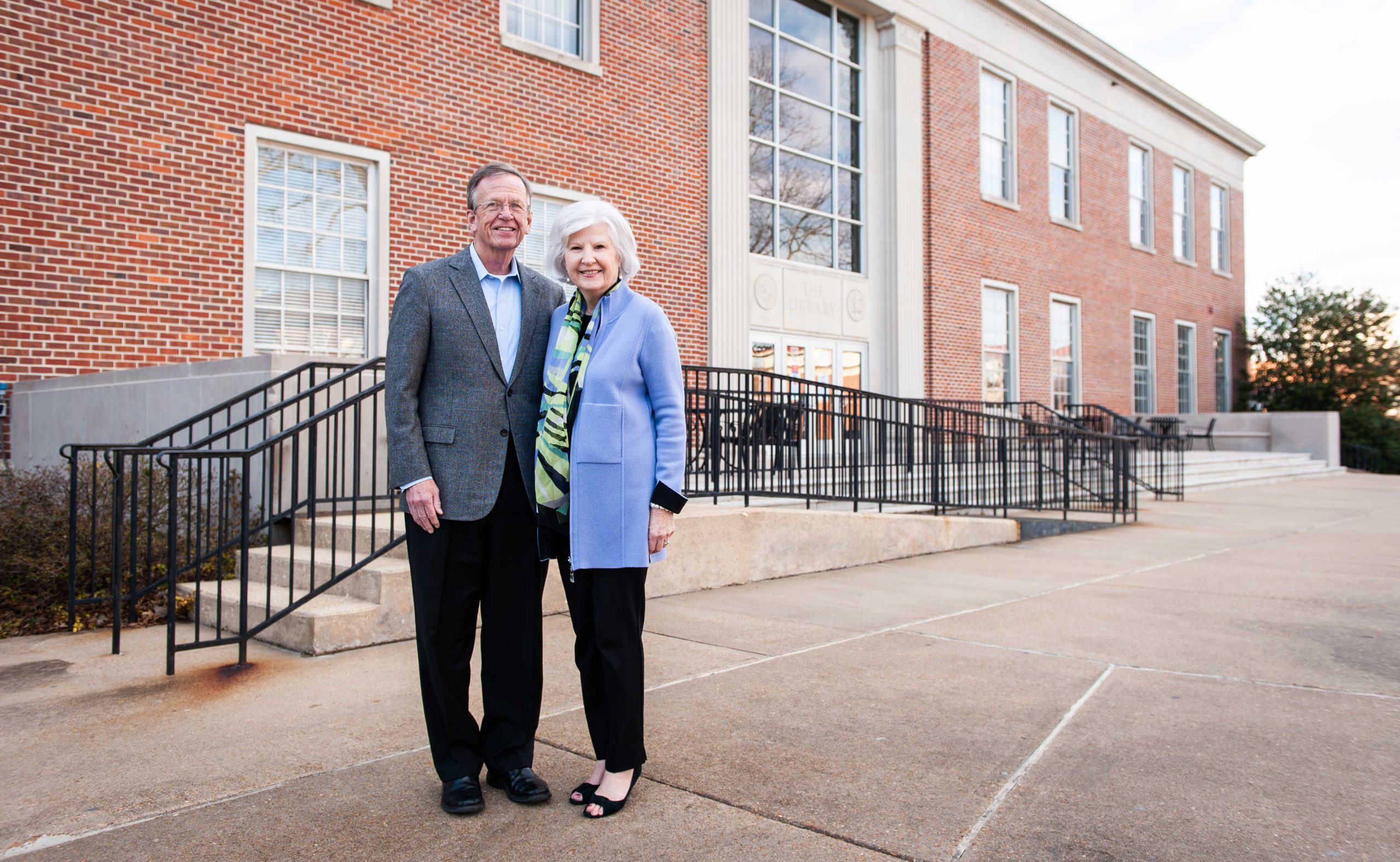 University of Mississippi alumnus Wayne Drinkwater is eager to see his alma mater attract the nation’s top educators to its faculty — a goal he believes begins with enhancing UM libraries.

“To attract faculty members and graduate students who are ambitious in their fields, we need to show them we have strong research support for their areas of interest,” said Drinkwater, an Oxford, Mississippi, resident and president-elect of the Friends of the Library — the University Libraries’ financial support society.

Drinkwater, who earned bachelor’s and juris doctor degrees from Ole Miss in 1971 and 1974 respectively, recently established a $150,000 charitable gift annuity (CGA) which will ultimately provide support to the University Libraries’ areas of greatest need.

The now-retired trial lawyer’s gift honors his wife, Ouida Creekmore Drinkwater, who earned a master’s degree in journalism from Ole Miss in 1978 after completing her undergraduate education at Mississippi University for Women.

“We are extraordinarily excited about the potential gifts like Wayne’s hold: increasing our informational offerings in support of both instruction and research and providing access to technology, both established and emerging,” said Cecilia Botero, dean of University Libraries.

With a simple agreement, individuals can transfer a minimum of $50,000 cash or securities to the UM Foundation and a fixed income stream will be provided to one or two beneficiaries. The donor receives a charitable tax deduction at the time of the gift and in the future the gift will provide support to the donor’s area of choice at UM.

“The CGA simply provides a way to arrange for annuity payments while making a charitable donation,” said Dan Wiseman, UM’s senior director of gift planning, who introduced Drinkwater to the giving vehicle. “We truly appreciate Wayne’s continued loyalty and commitment to Ole Miss to provide lasting support in so many areas. His contribution is yet another indication of his desire to provide for future generations.”

Drinkwater said he considers the CGA a win-win for the donor and the university.

“You get a significant tax deduction at the time of the gift, and your designated beneficiary, in this case my wife, will receive lifetime income, a large part of which will be tax-free,” Drinkwater said. “Meanwhile, the university can invest the principal of the gift and immediately start to help our libraries.”

At Ole Miss, Drinkwater was a Taylor Medalist, a Carrier Scholar, Phi Delta Theta president and director of academic affairs for the Associated Student Body. Co-valedictorian of the Class of 1971, he was named to the Ole Miss Student Hall of Fame.

After law school, also at Ole Miss, Drinkwater served as a law clerk to Chief Justice Warren Burger at the Supreme Court of the United States. Returning to Mississippi after his clerkship, he was involved in commercial and constitutional litigation throughout his career. Drinkwater is a Fellow of the American College of Trial Lawyers, a Fellow of the American Academy of Appellate Lawyers and an Advocate of the American Board of Trial Advocates. He is included in The Best Lawyers in America in four litigation fields and has been recognized as a Star Individual in the field of commercial litigation by Chambers USA: America’s Leading Lawyers for Business.

He and his wife, whom he met in high school in Meridian, Mississippi, have two adult children and two grandchildren. Their son, Woods, graduated from Ole Miss Law School in 2014, having earned an undergraduate degree from Loyola of New Orleans, and is a lawyer in Nashville, Tennessee. Daughter Jennifer, who graduated from Tulane University, teaches art at Iowa State University in Ames. Additionally, as Iowa State’s art representative, she travels the state speaking to community leaders about the importance of art as an economic development tool.

Drinkwater said he was inspired to make a gift by two of his former English professors: the late John Pilkington and the late Charles Noyes. For decades, the two professors worked to improve the library, including by writing personal letters to former students, encouraging them to give back.

Drinkwater said he received those letters, which both men continued to send for years after they retired.

“The letters did not arrive on any schedule that I could ever ascertain,” he said. “They did not seek large amounts. But Pilkington and Noyes kept at it, year after year. I remember telling Ouida at some point that if John Pilkington would send me a letter every week asking for money, at the end of the year he would have 52 checks.”

“These men were role models. Their work on behalf of the library was not part of their job descriptions. Nobody paid them to take on this assignment, and it certainly wasn’t done to advance their careers. They did it because they cared about this university and the people here, and they made trying to improve our library an important part of their life’s work,” Drinkwater said.

Drinkwater said his gift follows the initial support to the campaign given by his friend Ralph Vance of Oxford, current Friends of the Library president.

“Ralph and his wife, Douglas, are great examples of people who moved to Oxford and became actively engaged in supporting the town and the university both financially and otherwise,” he said. “When I saw the kind of contributions they have been making over the years, I thought that’s what I should do as well. Ralph and Douglas are great people and real assets to the university and the whole Oxford scene.”

The Friends of the Library Endowment is open to support from businesses and individuals. Gifts can be made to by sending a check to the University of Mississippi Foundation, with the fund’s name noted on the memo line, to 406 University Ave., Oxford, MS 38655 or by visiting https://umfoundation.givingfuel.com/nowandever.