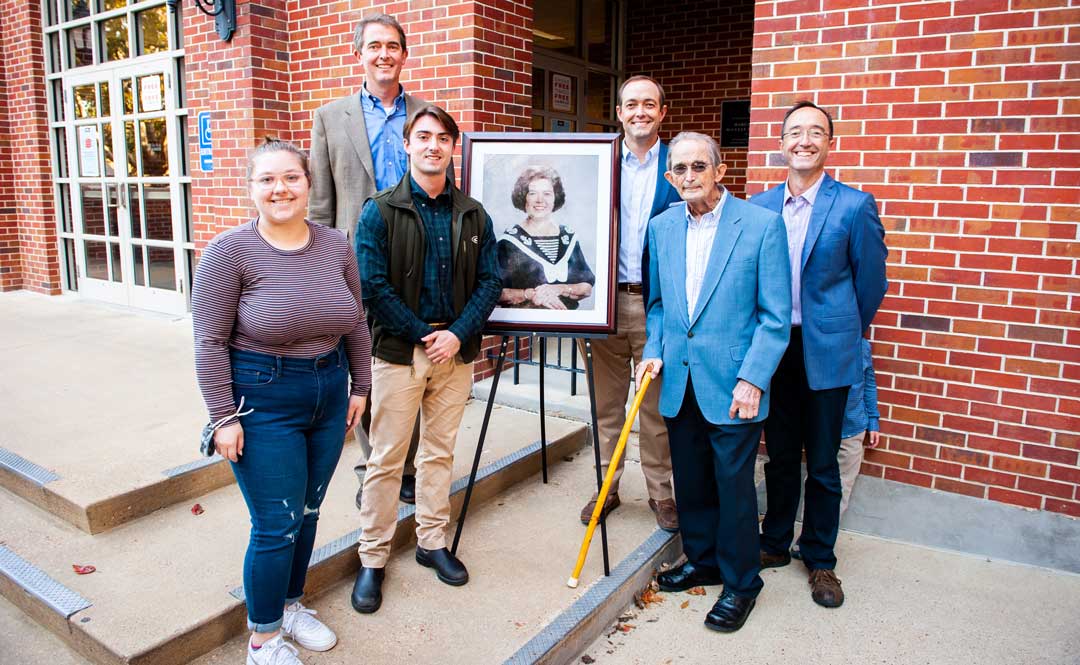 Gathered at the dedication of the Margaret Ann McCully Payne Jones entrance to Holman Hall were scholarship recipients Rachel Broom of Lumberton, Mississippi, and Dylan Russell of Hernando, Mississippi, from left, front row; Frank Jones of Richton, Mississippi; and Henry Jones of Hattiesburg, Mississippi; second row, Dr. John Jones of Ft. Payne, Alabama; and Walt Jones of Ft. Worth, Texas. The scholarship endowment created to honor their wife and mother now stands at more than $1.23 million and assists students in the UM School of Business Administration. Photo by Bill Dabney/UM Foundation

On the first day of every month for 46 years, Ann McCully Jones and her husband, Frank, repeated their wedding vows. After he lost his partner in life, Jones carried out what the couple had spoken of many times: funding University of Mississippi scholarships.

Jones of Richton, Mississippi, has established the Margaret Ann McCully Payne Jones Memorial Scholarship for School of Business Administration students and built the endowment to more than $1.23 million. The business school has dedicated the northwest entrance of Holman Hall to pay tribute to the life of Ann Jones, and a bronze plaque was recently unveiled.

First preference for the need-based scholarships will be given to freshman students from the Christian-based French Camp Academy, Baptist Children’s Village and Palmer Home for Children.

“Ann was always looking for ways to help individuals who were having difficult times because she experienced a host of life’s trials herself,” Jones said. “Ann and I had talked many times of helping those needing the most hope, and we wanted this scholarship to assist students in the years ahead who otherwise might not be able to attain their full potential.

“We hoped and prayed that these future recipients would be successful in their chosen endeavors and, as their lives unfolded, they would be able to pass on help to other young men and women. Our desire was that each person helped would in turn help others to reach their destiny. It is our intent that they join us in caring and carrying forward a legacy of helping others.”

Henry Jones of Brandon, Mississippi, the oldest of the couple’s three sons, said anyone who knew his mother, who died in August 2017, recognized her priorities. “She loved God, her family and Ole Miss, and she was very happy when any two of those loves could be found together.”

Frank Jones originally planned to attend West Point Military Academy, but a neck injury prevented him from taking advantage of that opportunity. Ole Miss was the only other school he would consider. After two years in the Army Chemical Corps, he enjoyed seven and a half years working with the Pepsi Cola Corp. in New York where he traveled extensively over the country. The call to come back to Mississippi and join his father in the funeral profession ended the Pepsi Cola involvement.

Ann Jones joined a host of other family members who chose to make the Oxford campus their college home, and an uncle advised her to seek out the Ole Miss Business School. Born in Waco, Texas, while her lawyer father, John Triplett McCully, served as an Army Intelligence officer, her family returned to DeKalb, Mississippi, where she graduated from DeKalb High School, then going on to Ole Miss. Her mother, Margaret Payne McCully, was an Ole Miss graduate and a high school English teacher at DeKalb High School and Murrah High School in Jackson, Mississippi.

The Joneses first met in New York City at a Marble Collegiate Church function following a message by Dr. Norman Vincent Peale, and then spent the afternoon at the Metropolitan Museum of Art with friends Lester and Janaan Clark of Hattiesburg, Mississippi. Dedicated to a career that took her all over many states as a business trainer for IBM, Ann McCully initially wasn’t to be distracted by romance, and Jones said it took him five years to convince her to marry him.

“Ann was blessed with great intelligence and typing speed,” her husband said. “The business world offered an opportunity for her to earn a much better salary than teaching, which was her mother’s profession. She loved traveling with IBM, which was a good company to work for.”

McCully left IBM and returned to Mississippi to plan her wedding. Later, she helped her husband with his Standard Oil agency and Chevron jobbing businesses, before the couple, upon the retirement of Frank’s father, joined the family business, Jones & Son Funeral Home. The couple expanded the funeral home to other locations in the south central Mississippi area.

In addition to raising their three sons — Henry, John and Walt, who all earned their first degrees at Ole Miss and were Sigma Chi members like their father — they were extremely active in the First Baptist Church of Richton through the music and children’s programs, as well as in community organizations. Second preference for the scholarship is directed to Richton High School students.

Ann Jones was well-known for being an enthusiastic ambassador for Ole Miss. “A constant recruiter to Ole Miss, she gave many of my south Mississippi friends their first exposure to Oxford and the Grove. Mom was a faithful woman and a Rebel. She loved deeply,” said son Dr. John Jones of Indianola, Mississippi.

“What I cherish about my mom was her passion and commitment to the things she loved,” said son Walt Jones of Fort Worth, Texas. “She loved the Lord, her family, friends and Ole Miss. Everyone she met knew they were important to her and that she valued their relationship. She taught me how to love people well and to love Ole Miss!”

Freshman recipients of the Jones Scholarship may retain the award until completion of their undergraduate degree (up to eight semesters) and it can assist graduate students with their MBA degrees (up to four semesters), provided they remain in good academic standing. The School of Business Administration Scholarship Committee will make the selections each year.

Individuals and organizations with the same desire to meet the needs of those less fortunate may make  gifts to the Margaret Ann McCully Jones Memorial Scholarship Endowment by sending a check with the fund’s name noted in the memo line to the University of Mississippi Foundation, 406 University Ave., Oxford, MS 38655; visiting online at www.umfoundation.com/makeagift.