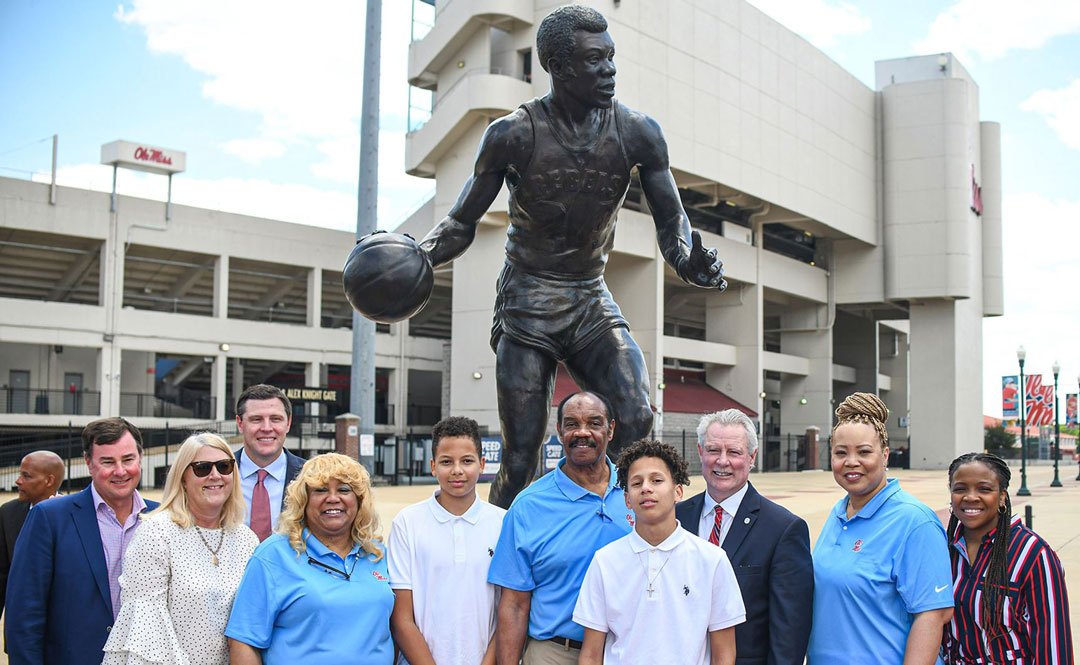 “It’s a beautiful thing,” said Ball, admiring the monument that stands adjacent to the Sandy and John Black Pavilion at Ole Miss, the Rebels’ basketball arena. “I’m excited about having a statue. I never dreamed of having one, and I thank the university for it.”

On Oct. 7, 2021, the 1975 UM graduate was inducted into the Ole Miss Alumni Association Hall of Fame. His legacy will continue in perpetuity with the statue serving as a reminder of his impact on the university.

Designed by renowned Mississippi sculptor Kim Sessums, the Ball statue sits on a four-foot-tall limestone base and includes a historical marker to reflect on Ball’s influence as a civil rights pioneer.

The monument was funded with a gift from business executive Bill Fry, a 1980 UM graduate, and his wife, Lee Anne, of New York, New York. This is the latest of many major gifts the couple has committed to the university, including a 2018 gift in support of the McLean Institute for Public Service and Community Engagement, a 2019 scholarship in memory of their niece and a 2020 planned gift that will establish a chair in the School of Business Administration.

“Lee Anne and I believe that Coolidge’s courage and grace stand as a great example for everyone who comes on the campus,” Fry said. “We hope everyone will take a few minutes to learn his story.”

On August 6, 1970, Ball signed the Rebels’ last available basketball scholarship for that season. The Indianola, Mississippi, native was recruited by other schools such as Arizona State, Northwestern and New Mexico State, but his decision to attend Ole Miss opened the door for future Black student-athletes to make their way to the Oxford campus to wear the “Red and Blue,” not just in basketball, but other sports as well.

“Our university is forever indebted to Coolidge Ball for the courage he showed 50 years ago,” said Keith Carter, vice chancellor for intercollegiate athletics. “With his strength, humility and kindness, Coolidge provided a beacon of light for our community while setting an example for generations of student-athletes, both on and off the court.

“We are eternally grateful to Coolidge for his contributions to civil rights and for his leadership for Ole Miss,” he said.

Ball’s ground-breaking Ole Miss career saw him earn first-team All-Southeastern Conference honors from the league coaches in 1972 and 1973. He also earned second-team All-SEC honors from the Associated Press in 1972 and 1973, was selected to the United Press International third team during all three of his varsity seasons (1972-73-74) and made the All-SEC Freshman team in 1970-71.

His first varsity season came his sophomore year when he averaged 16.8 points and 10.3 rebounds per game, while leading the team with 42 assists. He scored a career-high 30 points against Vanderbilt and LSU that season and added a career-high 19-rebound performance against the University of Southern Mississippi’s basketball team.

Ball was instrumental in helping Ole Miss defeat SEC rivals the universities of Kentucky and Tennessee and Mississippi State University in consecutive games in 1973. He scored 1,072 points during his varsity career, helped lead the Rebels to three straight winning seasons for the first time since 1936-38 and was one of the team’s most respected players, earning team captain and MVP honors.

Ball was inducted into the Mississippi Sports Hall of Fame in 2008 and the Ole Miss Athletics Hall of Fame in 1991 and was a member of the SEC Basketball Legends Class of 2005. When UM celebrated its “First 100 Years of Ole Miss Basketball” in 2009, it came as no surprise when Ball was selected to the All-Century Team.

Since 1979, Ball has owned and operated Ball Sign Co., a business he started upon his return to Oxford after a four-year stint coaching basketball at Northwest Mississippi Community College.

Ball and his wife, Ruth, have two children, Telitha and Anthony. Telitha lives in Desoto County, while Anthony resides in Arkansas and has two sons, Mason and Marion.

Inducted in 2012 into the Ole Miss Alumni Association Hall of Fame, Fry himself is a UM success story. He earned a master’s degree from Harvard Business School in 1990. Between undergraduate and graduate schools, he spent eight years in the U.S. Navy, last serving as a lieutenant in the Nuclear Propulsion Program.

Fry joined American Securities in 2010 as one of the company’s first seven partners. American Securities is a New York-based private equity fund with $30 billion under management. Previously, he was CEO of the Oreck Corp. and has also helmed several entities owned by various private equity firms and public companies, holding positions as president of the Dixie Group, CEO of Bell Sports and Bell Riddell, and president of Easton Bell Sports.

As an undergraduate, Fry was a member of Phi Kappa Psi fraternity and the Navy ROTC. Lee Anne Fry is a graduate of Auburn University and worked for the CIA in Washington, D.C., where they met. They have two grown children.

Individuals and organizations can make gifts to the Coolidge Ball Legacy Project Fund by sending a check with the designation noted in the memo line to the University of Mississippi Foundation, 406 University Ave., Oxford, MS 38655; or online at www.umfoundation.com/makeagift.