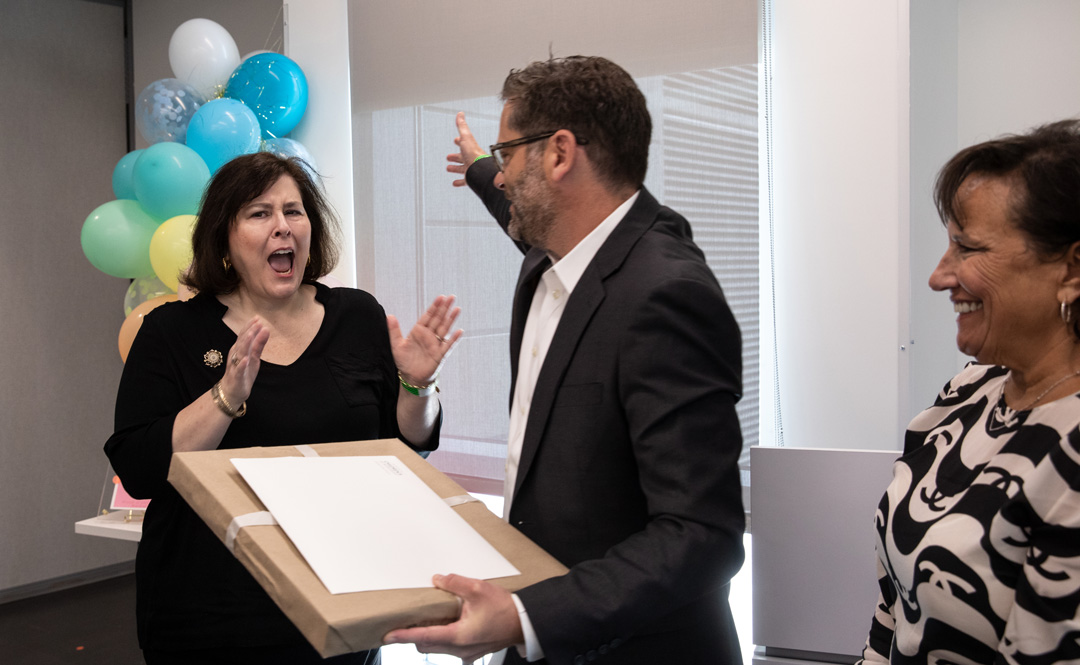 Tena McKenzie reacts with surprise after being honored with a $100,000 gift to the Campaign for Children's of Mississippi. Friends board member Rob Armour congratulates her as Sara Ray, a past board chairman of Friends of Children's Hospital, looks on.

Back in 1989, George H.W. Bush was president, “The Simpsons” premiered on TV and a new children’s hospital at the University of Mississippi Medical Center was just a dream.

Fast-forward to 2021, and two towers, one named for UMMC’s first pediatrics chair, Dr. Blair E. Batson, and the other named for philanthropists Kathy and Joe Sanderson, are where state-of-the-art health care for children is offered.

Through the years, Tena Payton McKenzie has been a constant, first as a part of UMMC’s Office of Communications and Marketing before becoming executive director of Friends of Children’s Hospital, a nonprofit dedicated to raising funds for Children’s of Mississippi.

At McKenzie’s retirement, BankPlus, a perennial Friends supporter, and Sara and Bill Ray donated $100,000 in her name. This gift in her honor will be celebrated with a recognition plaque at a family consultation suite and echocardiogram room.

Echocardiograms use high-frequency sound waves to create pictures of a child’s beating heart in action.

Suzan Thames, who, along with Dr. Owen B. “Bev” Evans, founded Friends of Children’s Hospital, said the area bearing her name is appropriate, since her efforts over nearly 32 years of advocacy and fundraising helped saved lives.

A champion for children

Behind the scenes, raising the first dollars toward construction of the Batson Tower in the late 1980s and early 1990s was McKenzie. Through Friends and Children’s Miracle Network Hospitals, she would raise millions more before retiring at the end of May.

“Tena was the right person at the right time,” said Evans, who succeeded Batson as chair of pediatrics.

At the start of his chairmanship, Evans was focused on replacing the smaller children’s hospital area of UMMC.

It was then that McKenzie was hired as a writer and photographer for UMMC.

“We became close allies,” Evans said. “She has always been a champion for children.”

McKenzie, a graduate of Mississippi University for Women and the University of Southern Mississippi, had hoped to become a teacher, but answering an employment ad for UMMC helped her have a great impact on generations to come.

McKenzie told the children’s hospital story across the state, sharing the need for a new facility.

“When I asked if anyone had a story they’d like to share about the hospital or a child treated there, few hands were raised,” she said. “The opposite is true now—only a few in any group haven’t heard that Mississippi has a wonderful hospital just for children.”

McKenzie’s career has spanned the time from 1989, when the Junior League of Jackson raised $2 million to build what is now the Children’s of Mississippi Center for Cancer and Blood Disorders to the opening of the Kathy and Joe Sanderson Tower and beyond.

During her years as executive director, Friends made their largest commitment, pledging $20 million toward the Campaign for Children’s of Mississippi, the $100 million philanthropic drive to help fund construction of what is now the Sanderson Tower.

“The groundbreaking ceremony that took place in fall 1989 marked the beginning of my work with the children’s hospital and the ribbon-cutting for the opening of the Sanderson Tower, held in fall 2020, marked the ending,” she said. “In between the two, thousands of donors, sponsors, volunteers and Medical Center staff have worked tirelessly to ensure our state’s children receive the best health care available close to home. What an honor to have been a part of leading this effort.”

By 1990, total gifts to the hospital were about $200,000 annually, with most of them presented during the Children’s Miracle Network Telethon, she said.

In the last five years, Friends raised about $3 million a year and a record $3.4 million during McKenzie’s last year as executive director.

“The most significant change in Friends over the past 15 years is the growth of the organization,” said Sara Ray, a board member and past board chair of Friends of Children’s Hospital. “In 2007 it was truly a stretch for the board to pledge $500,000 annually for five years to raise $2,500,000 for the Eli Manning Children’s Clinics. During the fiscal year ending June 30, 2021, we gave over $3,000,000 in just that one year!”

Through Friends fundraisers including Over the Edge with Friends, an event that has volunteers rappelling down buildings, the patients have always been the inspiration, McKenzie said. “They helped me accomplish things I didn’t even think were possible.”

In 2014, hospital leadership faced a shortage of space in the Batson Tower, where Friends had a small office on the sixth floor.

“Rather than relocating on campus, Friends chose to lease office space large enough to grow the organization. Their decision to hire an executive director followed shortly after, when volunteer board members found themselves working full-time to supervise the two-person staff, manage the brand, raise funds and handle the legal requirements of a 501(c)(3),” McKenzie said.

McKenzie applied for the position and retired from UMMC.

“Ultimately, being able to retire from UMMC while still doing what I loved for children’ hospital and the challenge of doing something a bit different was appealing, and I accepted,” she said.

“As executive director for Friends of Children’s Hospital for the past six years, Tena’s leadership has helped build a foundation for our organization that can be used for years to come to ensure we continue to serve children, and for that – and her – we are immensely grateful,” said Melanie Morgan, board chair of the nonprofit dedicated to raising funds for the children’s hospital.

Friends’ chairman-elect John Scarbrough said McKenzie’s work wasn’t a career as much as a calling.

“It was always more than a job for Tena,” he said. “Working with and for the children’s hospital was her calling. She had the hearts and minds of those children at the forefront of every decision she made.”