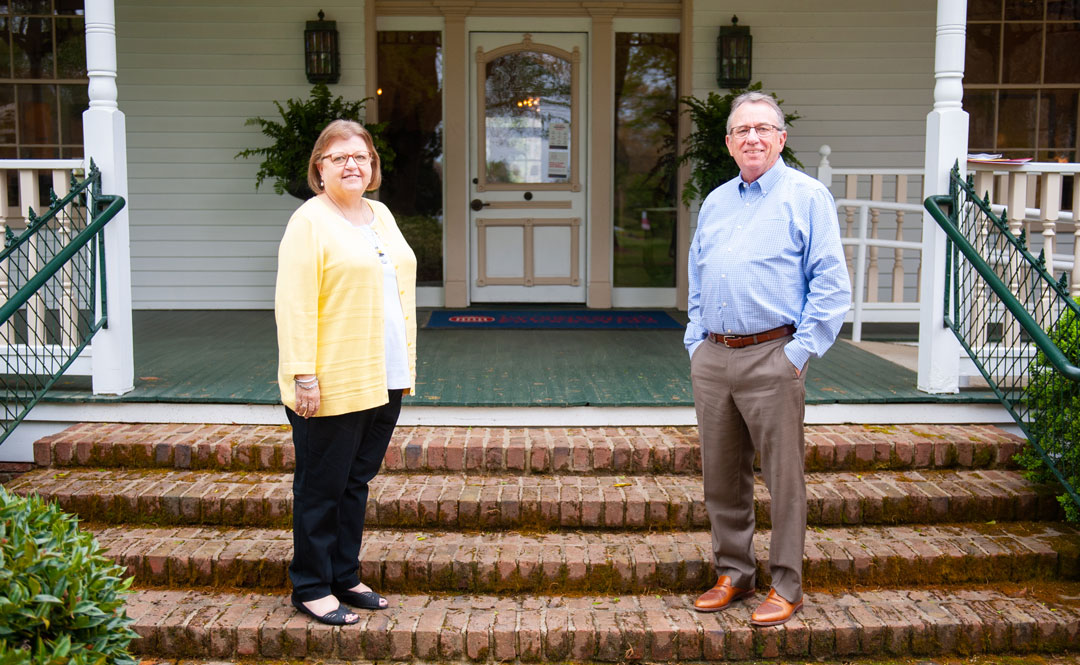 Donna Patton (left) and Ron Guest stand on the front steps of Brandt Memory House, home of the UM Foundation.

University of Mississippi Foundation employees Ron Guest, executive director of Foundation Services, and Donna Patton, director of stewardship, retired in March 2021 — both leaving a legacy of decades of service.

“Their collective years of service to the foundation and ultimately to the University of Mississippi have been invaluable. Both Ron and Donna have been instrumental in strengthening our work here, so that we can better support Ole Miss students, faculty, facilities and programs,” said Wendell W. Weakley, foundation president and CEO.

“Ron and Donna will be greatly missed on our team, but we expect to keep in touch, and we wish them well in the next chapter of their lives.”

Guest of Oxford, Mississippi, joined the foundation staff in 1983 as information technology (IT) was beginning to play an important role in charitable organizations through communication, data management and donor relations.

He guided the foundation’s services from the days of hand-typing receipts and donor records on index cards to the present with its fully computerized state-of-the-art processing and information system. Guest accomplished this transformation with approximately the same number of staff, many of whom have been his co-workers for years.

“He is a true professional, appreciated by his fellow co-workers for his sound judgment and institutional knowledge, admired for his steady, guiding hand and calm nature,” said Don Frugé, former foundation president and CEO. “Ron has a great love for the university and for the UM Foundation that he helped build and shape. He will be missed.”

During Guest’s tenure, the magnitude of annual, private gifts have grown from roughly $2 million to over $100 million.

“As the mission of the foundation grew and our IT department expanded, I moved into an administrative role as director of Foundation Services,” Guest said. “I will miss this staff. They are my coworkers, but beyond that, they are my friends and have been on this journey alongside me through both the rewards and challenges that life offers.”

Patton of Pontotoc, Mississippi, has helped support Ole Miss for the past 42 years, having retired from the University of Mississippi in June 2009 after 31 years and joining the UM Foundation staff a month later.

Patton has played a significant role in the growth of private support for the university, having held a number of positions both at the university and UM Foundation.

“It has been my privilege to have worked closely with Donna, and I say thanks for a career well done.”

Patton reflected on her years of service to the university and foundation:

“These 11 and a half years have been such a blessing to me and to my family, and each person at the foundation holds a special place in my heart,” she said. “I am indebted to Dr. Frugé, Wendell and Ron for giving me the opportunity to work here after my retirement from the university, and I am so grateful to each of my coworkers for their help, guidance, direction and, most of all, friendship.”

In the early 1990s, Kirk Purdom, now executive director of the Ole Miss Alumni Association, was director of development for the College of Liberal Arts. He worked with Guest for about seven years and the two became friends.

“Everybody who knows Ron loves him. He’s just a super nice guy,” Purdom said. “I know he’s put in decades of service to this university, so I wish him, Sandra and their family the best. We’re going to miss Ron. That’s for sure.”

Guest was instrumental in developing not only the alumni database but also advancement services, which handles the UM Foundation’s gift processing and receipting.

“He’s one of the guys behind the scenes. Few people would realize everything he did to make sure tax receipts would go out, gifts were being processed the correct way, research was being done correctly …,” Purdom said. “Even when I was away from Ole Miss for 15 years, if I had a data or tax question, I would still call Ron to see how he handled such problems down here, knowing I was getting really sound advice from an individual with extensive experience.”

Guest’s deep knowledge of university operations and focus on donor support has contributed greatly to the foundation’s growth and ability to meet donors’ needs, Weakley said.

“He has always had a demonstrated passion for getting it right,” he said. “We are fortunate to have had his leadership, instilling confidence with all stakeholders and knowing our donor records are accurate. His leadership will be missed, but he has paved the way for continued success in our development services.”

Through the years, private support has evolved from a nice addition to a necessity in furthering the academic missions of public universities.

“When I started at the foundation, we were just beginning to tap into that support,” Guest said. “I am proud to have had the opportunity to apply advancements in technology to our office and play a small role in advancing private support at Ole Miss, my alma mater.”

Patton joined the university staff in 1977, holding positions in the Division of Continuing Education, the Office of Alumni Affairs, the College of Liberal Arts and the Office of University Relations. She worked for then Vice Chancellor Robert Khayat until he became chancellor and later joined a planning team he appointed, led by Gloria Kellum, vice chancellor emerita of University Relations.

“We worked for the first five years on the Sesquicentennial, which involved planning a strategy for the 21st century and a celebration of the university’s 150th anniversary, and the last thing we worked on was the 2008 Presidential debate hosted on campus,” Kellum recalled.

“Donna was the organizational brain behind those initiatives and every one of our initiatives in between. Some of us are dreamers and vision-type people. Donna certainly has a vision, but she expresses it in the way in which she organizes information. Not only that, she’d keep you straight on it.

“What I like best about Donna is that she’s the kindest, most positive person I’ve known. Is she honest in telling you how she feels? Absolutely! But in the nicest, most humble way, she will let you know what she thinks is best, which I adore about people,” Kellum said. “I think Donna is the most likeable person I’ve met in my life. She’s solid. She’s got character and integrity — just all those things you’d like your best friends to have, so she’s one of my best friends now.”

Both Kellum and Patton retired from the university when Patton joined the UM Foundation staff, ultimately as director of stewardship.

“We were very fortunate to be able to add Donna to our UMF team upon Dr. Kellum’s retirement in 2009,” Weakley said. “Her attention to detail, positive attitude and dedication to Ole Miss were a perfect match for the UMF stewardship position. We will miss her on our team but know we are better positioned for the future thanks to her many contributions over the years here and at UM.”

Patton reflects fondly on her years working on behalf of the university.

“My favorite memories would be the amazing experiences I have had with the awesome administrators, faculty, staff and students during these 42 years,” she said. “I have been blessed to work for and with the cream of the crop. It is all about the people — too many to name — but all so very special to me and they are what I will miss most about working here.”

And going forward? Both Guest and Patton plan to spend more time with family.

“There are a lot of places Sandra and I haven’t been and a lot of people I haven’t met and I plan to spend my time doing both of those things,” Guest said.

Similarly, “I am excited about what God has in store for me and my family in the days ahead,” Patton said. “But I will always cherish my membership in the Ole Miss and UM Foundation families.”