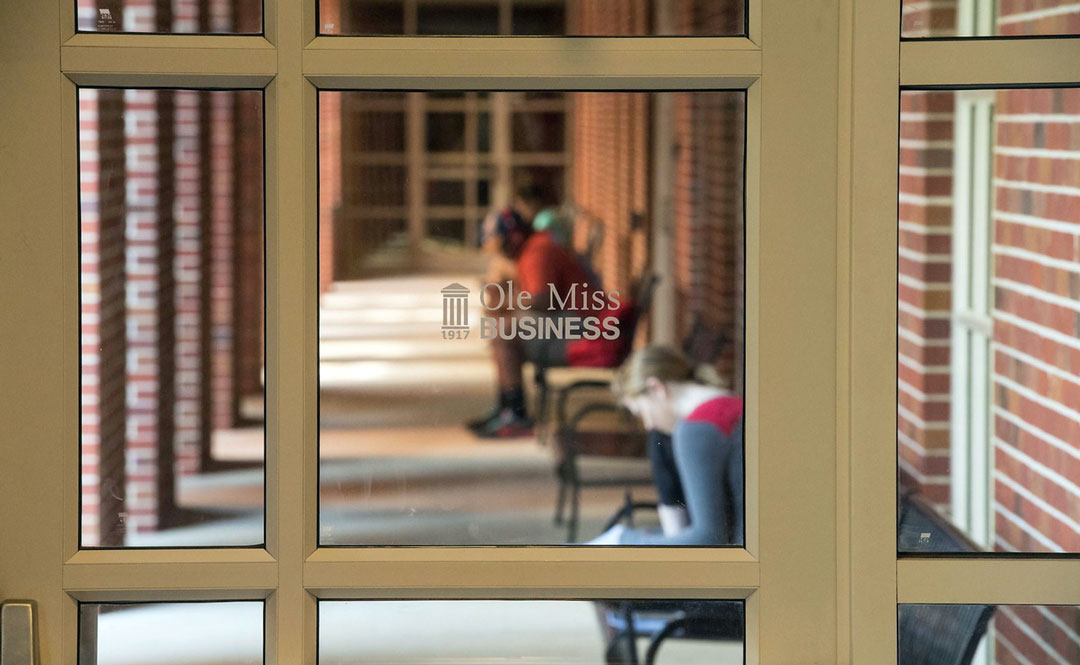 Ole Miss students study in the breezeway outside of Holman Hall, home to the School of Business Administration.

A $60,000 gift to the University of Mississippi for the Robert C. Pozen Scholarship MBA Diversity Fund will go to two students pursuing master’s degrees in business administration.

The award covers $30,000 in tuition for two full-time students from Mississippi, who are entering the on-campus MBA program this summer or fall.

“I made the gift to three MBA programs to promote the admission of a more racially diverse MBA class and hopefully the programs will help train racially diverse leaders who will stay within the state after receiving their graduate degrees,” Pozen said.

“I chose the three SEC universities because I believe that the MBA program at these three schools will most likely achieve my goal,” he continued. “All three have well-respected MBA programs, which draw heavily from in-state residents.”

In addition to tuition assistance, the Pozen Scholars will be matched with professional business leaders who will provide mentoring support during and after the students’ MBA education.

“I believe that such mentoring is critical to their success in their business careers,” Pozen said.

“Bob has set the bar very high for other donors,” Cyree said. “To make such an admirable gift that essentially covers these students’ entire tuition is extremely generous, and we hope his gift will serve as an example that others will choose to follow.”

In addition to the SEC MBA program scholarships, Pozen endowed the Pozen Commonwealth program in 2020 at Yale School of Management to finance an executive MBA for three minority fellows with medical backgrounds.

A native of Bridgeport, Connecticut, Pozen is a senior lecturer at MIT Sloan School of Management and a non-resident senior fellow at the Brookings Institution. In 2012, he won acclaim for a popular book titled “Extreme Productivity: Boost Your Results, Reduce Your Hours.” In April, Harper Collins is expected to publish his latest book, titled “Remote, Inc.: How to Thrive at Work Wherever You Are.”

In 2004, Pozen became the executive chairman of MFS Investment Management, which now manages over $400 billion for mutual funds and pension plans. Between 2004 and 2011, the company’s assets under management more than doubled from a base of $130 billion.

During his career, Pozen has been active in business, government and academia. Prior to joining MFS, he was vice chairman of Fidelity Investments and president of Fidelity Management & Research Co. During his five years as president, Fidelity’s assets grew from $500 billion to $900 billion.

In late 2001 and 2002, Pozen served on President George W. Bush’s Commission to Strengthen Social Security and is credited for developing a progressive plan to make the system solvent. In 2003, he provided leadership as Secretary of Economic Affairs for Massachusetts Gov. Mitt Romney and in 2007,  as chairman of the Securities and Exchange Commission’s Committee to Improve Financial Reporting.

Pozen is an independent director of Nielsen and AMC (a subsidiary of the World Bank). He previously was an independent director of Medtronic PLC and BCE (the parent of Bell Canada). He also serves as chairman of the Leadership Council of the Tax Policy Center and of the Advisory Board of Agility (an outsourced CIO), trustee of the IFRS Foundation (international accounting) and a member of the Council on Foreign Relations.

He frequently writes articles for the Financial Times, the New York Times, the Wall Street Journal and the Harvard Business Review. Additionally, he has published a book on the recent financial crisis, “Too Big to Save? How to Fix the US Financial System,” and a guide for investors titled “The Fund Industry: How Your Money is Managed.”

For information about supporting the UM School of Business Administration, contact Angela Brown, senior director of development, at browna@olemiss.edu or 662-915-3181. To make a gift, visit https://give.olemiss.edu