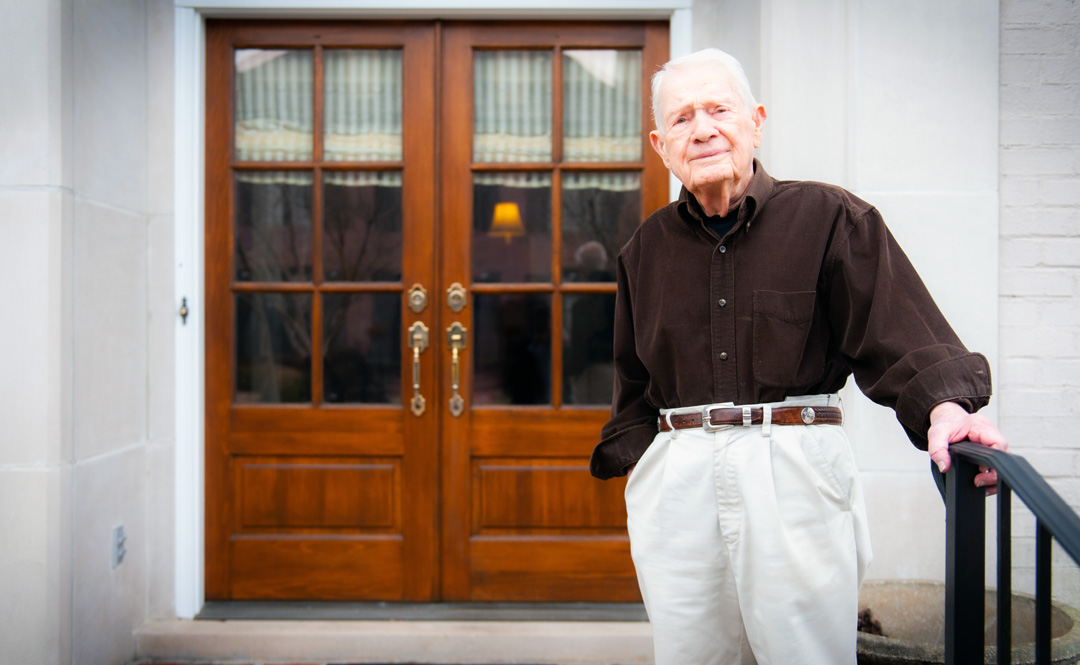 John Stone stands atop the front steps of his Germantown, Tennessee, home.

In his 94 years, John Stone has witnessed the evolution of modern technology: from a time when families gathered for radio shows to today when dads, moms, brothers and sisters each stream a different show on their own device.

The 1949 University of Mississippi graduate remembers when documents were drafted on a typewriter and mailed, often arriving to their recipient a week later. Now, he daily checks his e-mail on his iPad and receives pictures of his great-grandchild on his iPhone instantly — not days after dropping off a roll of film for developing.

Stone believes technology will continue to evolve, particularly with respect to computers, and he hopes his $1 million gift to the University of Mississippi will help students become active pioneers in that progress.

“I hope it will help someone from Mississippi receive a good education and hopefully do well in life and become a good tax-paying citizen,” Stone said, adding that he also hopes his gift will inspire others to give back.

“I had such pleasant times there. I just thought it was a good thing to do,” he said. “I’ve been lucky and just want to share a little bit. No big deal.”

“Mr. Stone’s generosity is a very big deal,” the chancellor said. “He recognizes that science, technology, engineering and mathematics (STEM) are fields that are rapidly growing in importance to our nation and world.

“We are extremely grateful for his gift and for his desire to see our students use their education to become transformative innovators within those professions.”

In fact, the university is poised to bolster STEM education with its construction of the Jim and Thomas Duff Center for Science and Technology Innovation — a state-of-the-art facility that will house interactive class settings as well as chemistry, biology, physics, engineering and computer science labs. Lower student-instructor ratios will be in place, and various disciplines will be spread throughout the building to promote interdisciplinary teaching and learning.

Among other building highlights, students will enjoy technology-enabled active learning, or TEAL, labs and a visualization lab, similar to a small IMAX theater for 3D visualization. Engineering students will have access to dedicated lab spaces, including fabrication and testing equipment, for their senior design projects.

Several common areas will give students space to study both individually and in small groups, and a STEM tutoring center will provide additional support.

“There is a critical need to increase the number of computer scientists and engineers to support innovation and economic growth in our state, region and nation, and scholarships are critical for many students to pursue these life-changing career paths,” said Engineering Dean Dave Puleo.

“Mr. Stone’s gift comes at a most opportune time, and we are so thankful for Ole Miss alumni like him who want to invest in the future of our school.”

Stone enrolled at Ole Miss in 1944 because that’s where his buddies were going to college. He thought he would study medicine but attended only for the summer before joining the U.S. Navy’s medical corps.

“That sort of turned me off to the medical field,” he said.

Returning to Ole Miss in 1946, he graduated three years later with a degree in banking and finance. He then took a job in the Memphis, Tennessee, headquarters of Firestone. After two years, he joined a fellow Sigma Alpha Epsilon fraternity brother working at the National Mortgage Co. Five years later, the two transferred to Boyle Investment Co., where Stone worked in residential mortgage for the next 50 years.

As his career progressed, he also became interested in land development, working with contractors and builders to create new neighborhoods in and around Memphis, such as the prestigious River Oaks community among others. He now lives in The Vineyards, an upscale neighborhood consisting of patio homes in Germantown, Tennessee, and one of the properties he developed.

Stone is humble. Having come from meager means in Tupelo, he found success through the investments he made.

“I was always basically on salary. I never made a whole lot of money,” he said. “I just saved some and invested some, started investing pretty early in stocks and bonds back when tax-free bonds were 10%. But I’m not that wealthy; I just have a little more than I need.”

When he wasn’t helping others buy homes, Stone stayed busy establishing a home of his own.

He met Clarksdale, Mississippi native Elizabeth Anne “Tootsie” Haire at the Toddle House in Memphis, where he went most days for a soda break. Once married, the couple lived for 30 years on Strathmore Circle in midtown Memphis. They had two daughters, Suzanne and Margaret, each of whom have two children. Tootsie Stone passed away in 2007.

Stone still plays golf several times a week at Chickasaw Country Club and drives to Florida once a year to play golf with a group of 40 to 60 friends.

“I always said that the main thing in college, unless you want to be a doctor or lawyer, is to learn how to learn and how to get along with folks. I learned a lot more than I thought I did,” Stone said. “You know, you don’t really realize you know things other people don’t until you get out of college.”

The John F. Stone Engineering Scholarship Endowment is open to support from businesses and individuals. Gifts can be made by sending a check to the University of Mississippi Foundation, with the fund’s name noted on the memo line, to 406 University Ave., Oxford, MS 38655 or by giving online at give.olemiss.edu.

For more information on ways of supporting the university’s academic community, contact Charlotte Parks, vice chancellor for development, at cpparks@olemiss.edu or 662-915-3120.