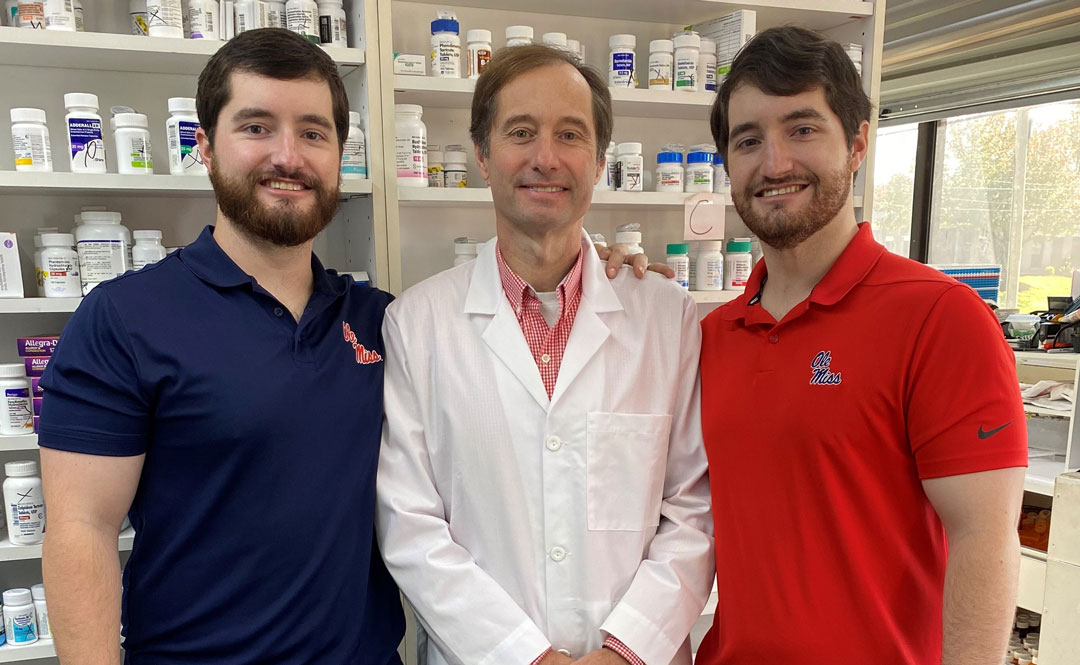 Chris Bonner (center) and sons Bryant (left) and Will are all passionate Rebel fans.

Chris Bonner’s gift to the University of Mississippi is a testament to his admiration for the late legendary head football coach Johnny Vaught.

Bonner, a pharmacist in Columbus, Mississippi, gave $125,000 to the Vaught Society, the Ole Miss Athletics Foundation’s (OMAF) fundraising level that provides financial assistance to student-athletes in the form of scholarships, academic guidance and wellness support.

“The name itself just brings chills,” said Bonner, a 1992 UM pharmacy graduate. “I grew up reading stories about Coach Vaught. He was a winner. At that time in Mississippi, we didn’t have much to latch onto, but Vaught was someone you could brag about. He was an equal to Bear Bryant; he just retired a decade earlier and, in my mind and heart, a decade too soon.”

Bonner hopes his gift will help Ole Miss Athletics be the best it can be.

“I don’t think we should worry where we fit in the perceived pecking order of athletics departments,” he said. “We may not have the successes or failures of other schools. But if we maximize what we can do, what Ole Miss can be … if we do all we can, then I can be happy with the results no matter what.”

“Chris was a pleasure to connect with. His depth of knowledge and respect for the history of Ole Miss Athletics immediately exposed his passion and desire to make a significant impact on our collective path to championship-level success,” Kindervater said. “We are excited to welcome him and his sons into the Vaught Society as immediate difference-makers.”

Bonner’s passion for Ole Miss sports stemmed from his parents, even before his college days. Though he is the one true rebel in the family — his parents and twin sons, Will and Bryant, attended other universities — all are consistent fixtures at Ole Miss football, basketball and baseball games.

His dad, Jimmy Bonner, a contemporary of Archie Manning, was born near Drew, Mississippi, hometown of the renowned Ole Miss quarterback. The son of a sharecropper living on meager means, he rarely had the opportunity to watch sports.

“The first game my dad ever watched on TV was Archie’s famous 33-32 shootout loss to Alabama in 1969,” Bonner said. “From that point on, he was hooked on Ole Miss football. He later earned three degrees from Mississippi State University, but his passion for the Rebels passed on to me, and now to my sons.”

After college, Bonner worked for Kroger Pharmacy in Vicksburg, Mississippi, for a year before transferring to Columbus to manage the Kroger pharmacy there. In 2001, he became manager of Winn Dixie Pharmacy in Columbus, which was sold to Southern Family Markets. In 2012, the company sold its pharmacy division, and Bonner sensed the timing was right to go independent.

“I opened Chris’ Pharmacy on Sept 17, 2012, and professionally, it was the best decision of my life,” he said. “Initially, I only wanted one store. But owning more became more and more appealing. I opened my second location, Chris’ Pharmacy and Sons Too, earlier this year.”

The name reflects the relationship he has with his twins.

“My sons and I are very close,” Bonner said. “When they finish school at Samford University, I hope to open many more stores for them, and I hope they take it further than I ever could. I see my company as generational wealth if they are managed properly.”

When he’s not running a store, he’s running a road or trail, having completed several half marathons and two full marathons. He’s also a southern history buff who collects pharmaceutical artifacts and antique bottles dating from 1860 to 1900. Additionally, he searches for Civil War relics and dredges for gold. On a trip to England, he found a bronze spearpoint that was dated 1500 BC by the Museum of London.

But none of his hobbies take priority over Ole Miss Athletics.

“What I would like most for Ole Miss is for it to be a source of pride for the people who care about our university and student-athletes.”