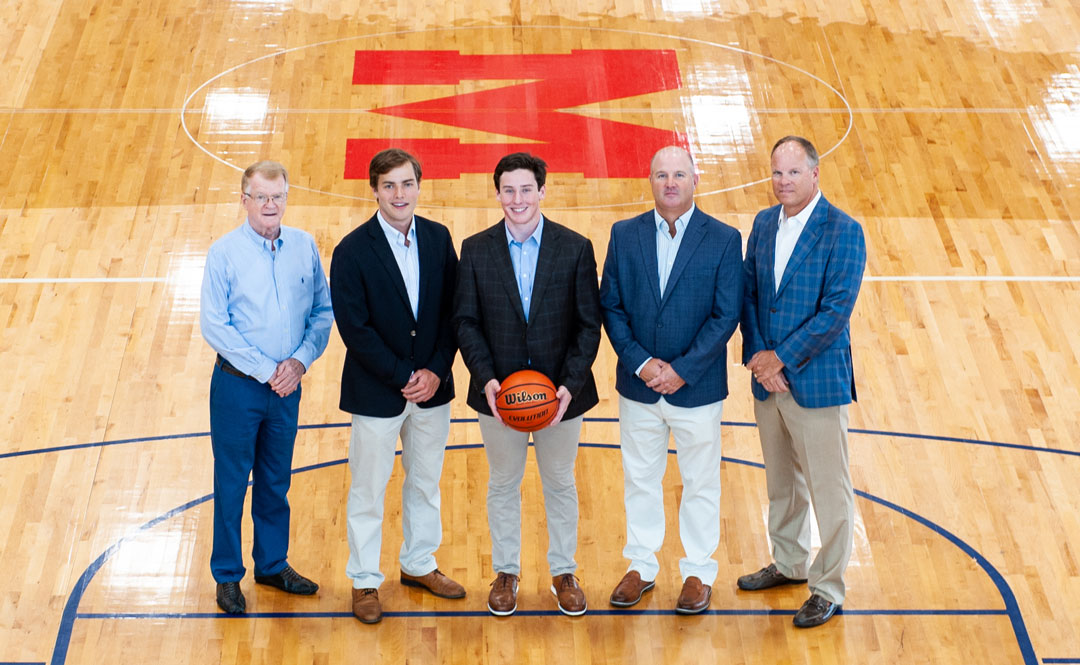 Professor Jimmy Davis, from left, Sigma Nu members Tate Fowler and Nathan Foxworth, John Green and David Magee stand on the basketball court in the new South Campus Recreation Center that will be named in honor of the Sigma Nu. The fraternity has increased its commitment of support to the William Magee Center for Wellness Education. Davis and Green are the fraternity’s advisors.

The Epsilon Xi chapter of the Sigma Nu fraternity at the University of Mississippi – known for having the largest collegiate Greek philanthropy in America with its annual Charity Bowl – is deepening its commitment to helping students.

The Sigma Nu chapter joined the initial grassroots movement that created the William Magee Center for Wellness Education on the Oxford campus, which counsels students with alcohol and other drugs (AOD) education and support. The fraternity has given $100,000 to the Magee Center already and recently pledged another $100,000 to help it grow, using proceeds from its annual Charity Bowl fundraiser.

As a result, a basketball court at the university’s new South Campus Recreation Center will be named for the Sigma Nu chapter, honoring the fraternity’s efforts to serve UM students now and into the future with AOD education and support.

“The need is big and the men of our fraternity recognize that leadership means caring for fellow students,” said James Davis, a Peery Professor of Accountancy at the university, who serves as the fraternity’s chapter adviser and has been involved with the chapter for six decades, including his time as a student and alumnus. “These young men are determined to make a difference and it’s rewarding to see their work.”

Named after the late William Magee – a student-athlete, Honors College scholar, Sigma Nu member and alumnus who succumbed to addiction, dying from an accidental overdose soon after graduation – the Magee Center opened in fall 2019 with grassroots support from students, alumni, faculty and staff.

“It means a lot to everyone in the chapter to help others,” said biochemistry major Nathan Foxworth of Columbia, Mississippi, a Sigma Nu senior and 2020 philanthropy co-chair who plans to attend medical school. “We care, and this is one way to show that.”

During that first fall semester, the center had more than 9,000 face-to-face student engagements, including on-campus recovery meetings, presentations to higher-risk populations, and First Year Experience classes addressing physical and mental wellness, alcohol and drug misuse, and sexual health. And center employees were involved in many successful one-to-one student assessments resulting in support and treatment referrals – a process that one student’s parent compared to “the Mayo Clinic.”

“When we first started talking about creating a center to serve students across campus, members of Sigma Nu approached me and said they wanted to help,” said David Magee, William Magee’s father and the director of institute advancement with the UM Office of Development. “They have been there from the start and are determined to see it through to impact.”

“The fact that the fraternity made its gift this year, despite the annual Charity Bowl football game being cancelled due to the pandemic, was inspiring.”

The chapter raised more than $168,000, contributing to the Magee Center, the Manning Fund (which benefits the Blair E. Batson Hospital for Children at the University of Mississippi Medical Center) and one victim of paralysis.

“The chapter was determined,” said John Green of Oxford, Mississippi, a chapter adviser who takes an active role in the Charity Bowl. “Our pledge class did a lot of work in the fall so that by this spring we were able to complete our fundraising, even without a Charity Bowl game. We offered to return sponsors’ money when the game was canceled, but they weren’t interested. They know it all goes to a good cause.”

Sigma Nu gave more than $100,000 of its funds raised this year to paralysis victim Emmie Brookins of Lakeland, Tennessee. The money helped her drive again. It’s the 30th time in 30 consecutive years that the UM chapter of Sigma Nu has donated money to a paralysis victim.

“It’s amazing to think that this chapter has raised more than $2 million since Bill Courtney, Jason Greer, John Quaka and others had the vision for that first Charity Bowl in 1990,” John Green said. “It’s made a difference in the lives of many people.”

Sigma Nu member James-Roland Markos, a 2017 Sally McDonnell Barksdale Honors College graduate now in medical school at the Mayo Clinic School of Medicine, was among UM students who were determined to make the Magee Center a Charity Bowl beneficiary four years ago.

“Doing something to help others within our community was important,” Markos said. “The well-being of all students matters, and we knew this work is crucial.”

To learn more about supporting the William Magee Center for Wellness Education, contact Brett Barefoot, senior director of development for parent and family leadership, at bmbarefo@olemiss.edu or 662-647-4276. To make a gift, click here.