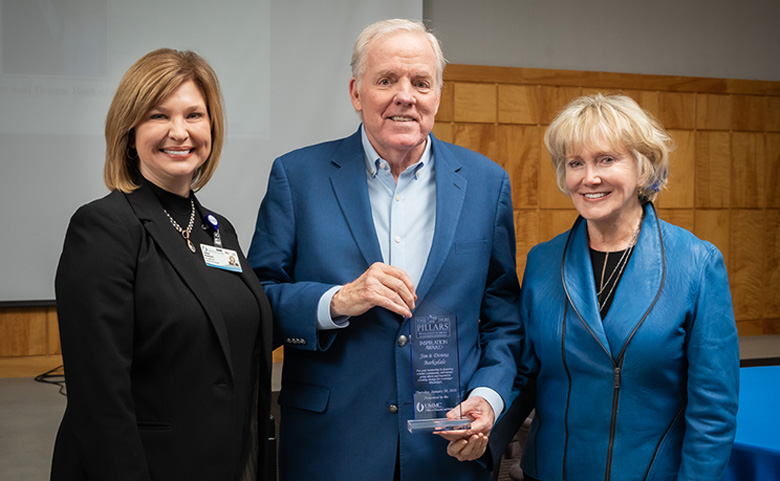 The couple received the Inspiration Award, one of six institutional accolades, during the third annual presentation of The Pillars, a tribute to those who further diversity and a “climate of inclusion” at the state’s only academic medical center and within the community beyond.

The annual event is hosted by the UMMC Office of Diversity and Inclusion.

The Barksdale family name is linked to millions of dollars in gifts for initiatives to better the state, including one whose 20th anniversary was marked recently: the Barksdale Scholarships.

“They are heroes of the Medical Center and for the state of Mississippi,” said Dr. LouAnn Woodward, UMMC vice chancellor for health affairs and dean of the School of Medicine.

Dozens of scholars have benefitted from their gifts, including a large number of African Americans, many of whom are now practicing physicians in this state. A Jackson native, Barksdale, 77, the chair and president of Barksdale Management Corp., graduated from the University of Mississippi in 1962 with a degree in marketing before selling computers for IBM. Later, at Federal Express, where he held a variety of leadership roles, including CEO, he helped deliver a computerized package-tracking system.

Afterward, he became president and CEO of a cellular communications company whose prosperity prompted its purchase from AT&T Wireless.

Starting in 1995, he led Netscape Communications Corp. for about four years as president and CEO during the dot-com boom. The company’s success led to its purchase in 1999 by AOL for $10.5 billion.

Three years later, the Barksdale Foundation granted $100 million to the state to foil illiteracy through the Barksdale Reading Institute, led at one time by one of Jim Barksdale’s five brothers, attorney Claiborne Barksdale. The donation also funded the Mississippi Principal Corps, a program to develop highly-effective, homegrown school administrators.

With an additional $2 million endowment, Jim and Sally Barksdale established scholarships meant to encourage talented African American students to stay in Mississippi for their medical education, naming the awards after physicians in their family: Dr. Bryan Barksdale, Dr. Don Mitchell and Dr. Fred McDonnell. More than 50 of these students have received these annually renewable grants.

Some years after Sally Barksdale’s death in 2003, Jim Barksdale met Donna Kennedy of Magee, who for years ran her own clothing design business, while also forging a career as a leader in education, business, philanthropy, civic endeavors and more. She was president of the Junior League of Jackson when it voted to support the Children’s Cancer Clinic at UMMC.

After their marriage, the first Jim and Donna Barksdale Scholars entered the School of Medicine at UMMC as beneficiaries of grants presented to students of merit.

Now, some 20 years later, the total number of Barksdale Scholars is around 90. The Barksdales’ medical school contributions have exceeded $17 million, paying for the education of scores of scholars, most of them African American, and all of them committed to living and practicing medicine in Mississippi for at least five years.

“I appreciate the honor,” Jim Barksdale said after the ceremony. “I’m so proud of our medical scholars; about 47 are now practicing in the state. We’re starting to make a dent in the physician corps in Mississippi.”

Another eight UMMC faculty and staffers were recognized as members of the inaugural 2020 Masters Class of learners from the Diversity and Inclusion Champion and Professional Development Certificate Program.

To support the University of Mississippi Medical Center, visit http://www.umc.edu/givenow/ or contact Keri Henley, associate executive director of development, at 601-984-2841 or khenley@umc.edu.