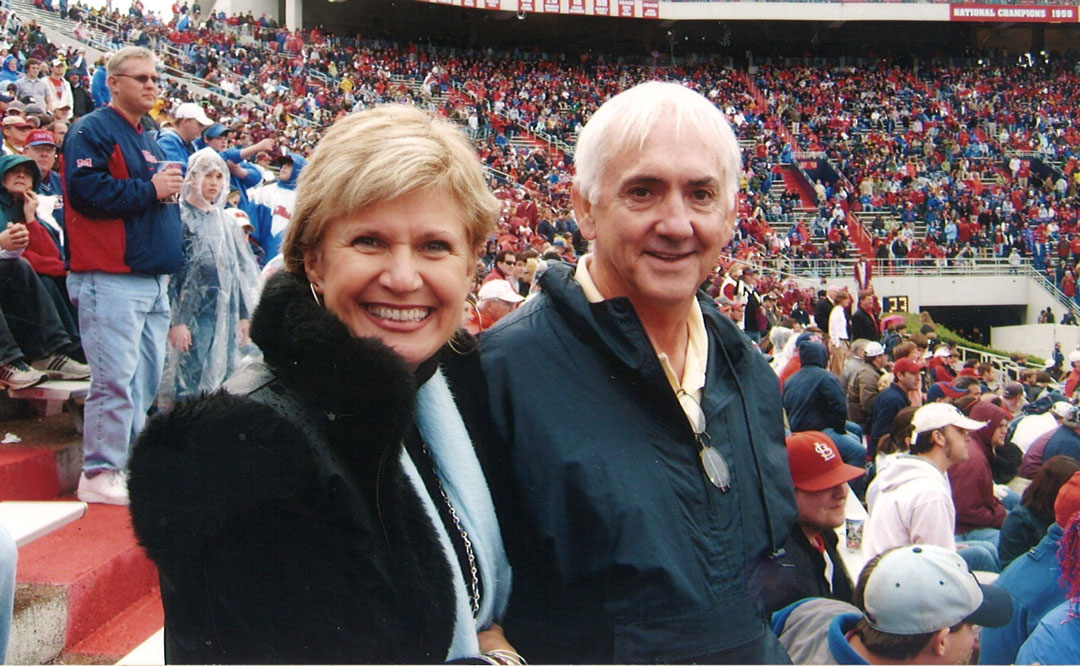 The late Doug Cunningham, right, is being linked in perpetuity to his beloved Ole Miss through a scholarship endowment created by his wife, Allen Cunningham, left. Doug Cunningham was a very talented college and professional football player who placed great value on educational opportunities.

The late college and pro football player Doug Cunningham enjoyed a life defined by his great affection for his family and friends, the University of Mississippi and his two restaurants. But there was something else – the great value he placed on education – and that has inspired a scholarship in his name.

“Doug loved Ole Miss and for as much as he loved athletics, education was of primary importance to him and our family,” said his wife, Allen Cunningham of Jackson, Mississippi. “While playing football, Doug majored in pharmacy which is an academically rigorous field of study. Creating a scholarship to assist students in obtaining a college education would make him very happy.”

Cunningham, who died in 2015, attended Ole Miss on a football scholarship offered by legendary Coach Johnny Vaught, playing halfback, wingback and kick returner. He averaged nine yards per time he touched the ball over three varsity seasons. In 1966, he led Ole Miss to an 8-3 record and was named All-Southeastern Conference. He played professionally for the San Francisco 49ers for seven seasons and then for the Washington Redskins for one season.

During his years on the Oxford campus, Cunningham was as revered off the field as on it. The student body voted him Col. Rebel (now known as Mr. Ole Miss).

“Doug was a Rebel to the core. He loved Ole Miss and Ole Miss loved him back,” said his wife who made a recent major gift to create the Doug Cunningham Memorial Scholarship Endowment.

“I hope future recipients will know that Doug was a popular and funny student in his day. He was a spectacular college athlete – fast as lightning – and a successful professional football player. He became a noted restaurateur in Jackson after his NFL days were over. Doug worked very hard and strived for excellence.”

“Doug was one of the most humble and the friendliest people I knew. Everyone loved him. Anyone would have wanted to be his teammate or his friend. He also later became a very well-respected player in the NFL.

“Doug loved Ole Miss before he ever came to campus and looked forward to the time when he would get to be a student-athlete. I believe he would be so thrilled about this scholarship; he would think it was awesome.”

“We are deeply grateful to Allen Cunningham for creating such a meaningful tribute to her husband, Doug. Many young people cannot afford to seek college degrees, and this new scholarship will transform lives by providing access to educational opportunities.

“In addition, attractive scholarships ensure Ole Miss can recruit deserving students to its campuses. When scholarship recipients graduate, they will make significant contributions that improve our society and strengthen the economy.”

First preference for the scholarship will be given to students from Grenada and Winston counties in Mississippi – Allen and Doug Cunningham’s home counties. Selection will be based on financial need, and those applying must have a grade-point average between 2.0 and 3.0. Recipients may retain the scholarship for up to eight semesters if they maintain a minimum 2.0 GPA and remain in good standing.

“Since there are so many scholarships granted to those with top-tier academic credentials, I thought it would be nice to offer financial assistance to those who might not have a perfect academic record but might be driven by their own determination and perseverance, ” Allen Cunningham said when explaining the GPA stipulation. “I’m hoping this scholarship can help provide life-changing college experiences that would not otherwise have been available.”

Doug Cunningham graduated from Louisville High School in 1963 after earning All-Southern, All-State and All-Conference honors during his senior season in 1962. Coached in high school by Fred Morris, he was selected Most Valuable Player in the Choctaw Conference in 1962, when Louisville High won the league championship. His combination of pure speed and elusiveness made him one of the most dangerous open-field runners in Mississippi football annals.

Once fully engaged in his collegiate career, Cunningham created many memories for Rebel Nation. In 1966, Ole Miss trailed the University of Southern Mississippi 7-0 in the fourth quarter. USM had never beaten Ole Miss on the gridiron, but all indications pointed to a Golden Eagle win that day. Until, of course, USM unwisely chose to punt to Cunningham.

“… The Rebel Return Man, Doug Cunningham, No. 22, sprang from nowhere, took the ball, and was immediately surrounded by white jerseys. He was hit, broke a tackle, hit again, shook himself free, darted one way then the other and suddenly emerged from a pile of humanity with his legs pumping, his knees high in the air, his hips twisting, and two blockers in front of him. The crowd erupted. Cunningham cut to the sideline … and hit the afterburners.

“For a few brief seconds, time that is still frozen in my memory, Doug Cunningham galloped toward the north end zone with unmatched speed, and crossed the goal line all alone. He circled by a fence, long since removed, and nonchalantly flipped the ball to the official. No bodily gyrations. No ripping off his helmet so the world could see him. No showy prayer. No struggling or somersaults. Just a casual little lateral of the ball, as if he had been in the end zone before.”

Cunningham was inducted into the Mississippi Sports Hall of Fame and the Ole Miss M-Club. After his football career Cunningham became a popular Jackson restaurateur, known for his graciousness, charm and wit in his operations of both the popular Gridley’s and Swensons.

Rick Cleveland, sports writer, editor and executive director of the Mississippi Sports Hall of Fame, gave the eulogy at Cunningham’s funeral. Cleveland shared that when he moved to Jackson and began playing golf at Live Oaks Golf Club and dining at Cunningham’s restaurants, the football great made him feel welcome.

“(Doug) always made me smile. He often made me laugh. And he always made me want to be more like him. I don’t know what more praise you can give a man like that. … For as I have learned in 50 years of sports writing, it’s not so much about the teams, the institutions or the colors of the uniforms. It’s about the people and Doug Cunningham was just plain good people.”

Allen Cunningham also graduated from Ole Miss, following in the footsteps of many family members. As an undergraduate, she was a member of the Kappa Delta sorority and the Committee of 100, a religious emphasis group. After earning her degree in elementary education, she enjoyed a 35-year career in teaching.

To make a tax-deductible gift to the Doug Cunningham Memorial Scholarship Endowment, send a check to the University of Mississippi with the name of the scholarship written in the check’s memo line. Contributions can also be made online at http://give.olemiss.edu. For more information, contact Nikki Neely Davis, executive director of Development, at nlneely@olemiss.edu or 662-915-6678.