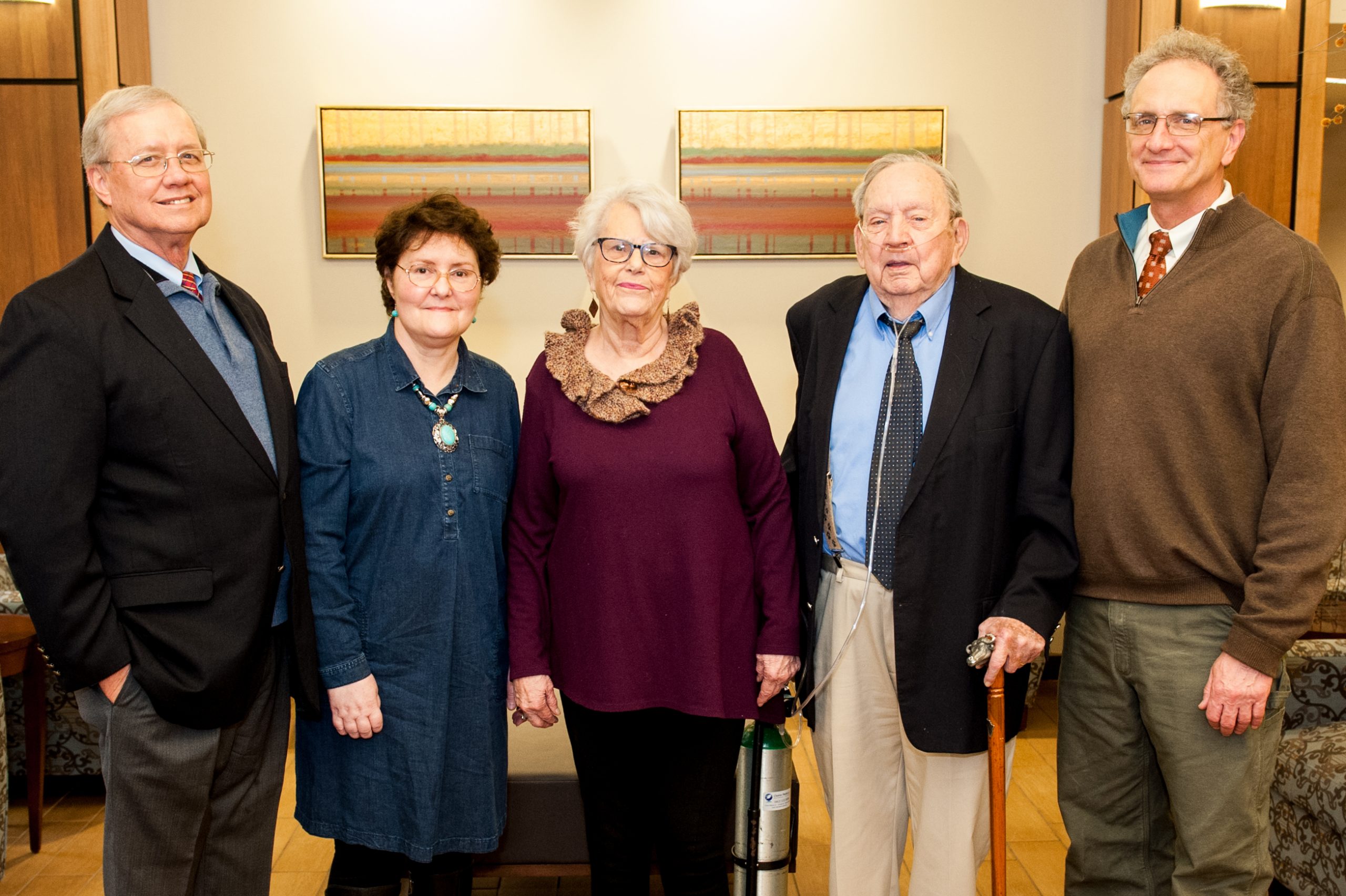 Ron and Jody Wilson (from left) have made a gift to the Sally McDonnell Barksdale Honors College in honor of Mary Lou and Harry Owens. Representing the Honors College is the dean, Douglass Sullivan-Gonzalez.

Ron and Jody Wilson of Oxford, Mississippi, want their planned gift to help generate more University of Mississippi courses that will engage and challenge students for generations to come.

The Wilsons recently included Ole Miss in their estate plans, offering the university their home as a way to pay tribute to their late son while honoring two of their closest friends.

The gift establishes the Harry and Mary Lou Owens Excellence in Teaching Endowment, honoring the longtime Ole Miss history professor who retired in 1998 and his wife. Earnings from the endowment will support the Sally McDonnell Barksdale Honors College (SMBHC).

“We hope the endowment will create super-interesting, intriguing and demanding classes for these students to enjoy,” said Wilson, a development officer for the UM College of Liberal Arts.

The Wilsons wanted to support higher education because it was important to their son, Matthew Wilson of Birmingham, Alabama, who held three degrees from Samford University. He died in 2018 at 34 years old.

“Our son wasn’t in the Honors College at Samford, but he graduated eighth in his Business School class and was named to Who’s Who, so he was one of the leading students on the campus,” Wilson continued.

“We decided that since we don’t have a family member to leave our home to, we would invest in the lives of Ole Miss honor students, pay tribute to Harry and Mary Lou, whom we have come to love, and also benefit Douglass Sullivan-Gonzalez (dean of the SMBHC), a very dear friend of ours whom I’ve known since college back in the ’70s.”

The endowment is designed to support quality teaching, research and service within the Honors College by providing salary supplements and covering expenses associated with research and travel for faculty.

“We greatly appreciate Ron and Jody’s vision for the Honors College and their generosity in making a gift that will benefit our students in perpetuity,” Sullivan-Gonzalez said. “Many professors on this campus have two or three courses that they would love to create and teach outside of their regular curriculum. That can happen within the Honors College and the Wilsons’ gift will help bring those opportunities to fruition.”

The Wilsons hope the endowment will inspire faculty members to develop extraordinary classes similar in academic quality to one that Owens taught during his tenure at Ole Miss when he examined the lives and work of Karl Marx, Sigmund Freud and Charles Darwin.

“These were three pivotal writers from the late 19th century who changed the world, and that’s the kind of intellectual class we want to be developed for these honors students,” Wilson said.

The Wilsons and Owenses became friends through their mutual love of history and chess, which the two men play almost every Friday.

“It’s about half and half,” said Owens. “I would say I’m a little bit ahead. I enjoy great conversations during this time with Ron. He is quite knowledgeable about almost everything.”

Owens also said he is humbled by the creation of an endowment in his name.

“I do feel very honored,” Owens said. “This gift is very special to me.”

To support the Harry and Mary Lou Owens Excellence in Teaching Endowment, send a contribution with the endowment’s name written in the check’s memo line, to the University of Mississippi Foundation, 406 University Ave., Oxford, MS 38655. Gifts can also be made online at https://give.olemiss.edu.

For information about including the university in your estate plans, contact Sandra Guest, vice president of the UM Foundation, at 662-915-5208 or sguest@olemiss.edu.