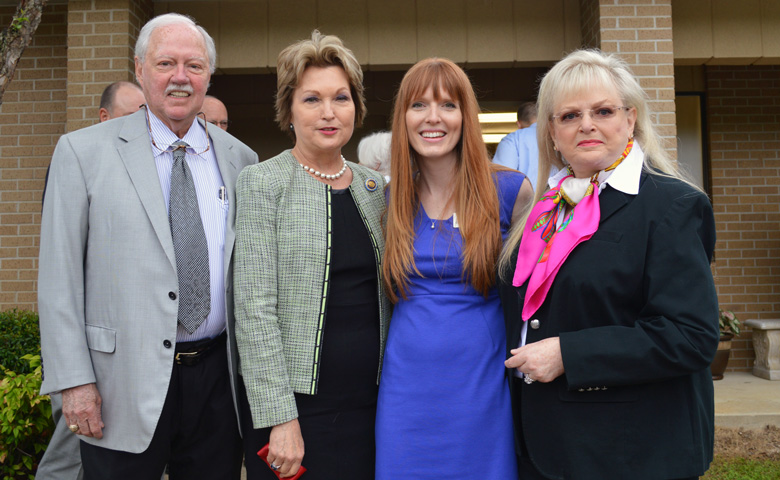 A new scholarship endowment at the University of Mississippi is poised to support students from impoverished areas who dream of becoming pharmacists.

With a $100,000 gift to the UM School of Pharmacy, Arkansas State Sen. Percy Malone and his wife, Donna, of Arkadelphia, Arkansas, created the AllCare Pharmacy Scholarship Endowment. Recipients will be selected by the School of Pharmacy Scholarship Committee and may retain the scholarship for eight semesters while in the professional program, provided they remain in good academic standing.

Additionally, AllCare Scholars will be full-time students in the School of Pharmacy who are residents of a Delta-region county in Mississippi or Arkansas and who demonstrate financial need as determined by the UM Office of Financial Aid.

“I decided to establish this scholarship so under-served students would be able to pursue their dream of becoming a pharmacist without worrying about the financial stress of continuing their education,” Percy Malone said.

“The Ole Miss School of Pharmacy gave me the education I needed to achieve my goal of becoming a pharmacist,” the 1965 graduate said. “I would like for others who want to become pharmacists to be able to attain their degree from Ole Miss as well.”

According to the Malones’ gift agreement with the university, first preference will be given to non-traditional students and second preference will be based on students’ contributions to the diversity of the School of Pharmacy’s student population.

“Non-traditional students are usually overlooked. It is our goal to help them continue to work on attaining their pharmacist degree,” Percy Malone said.

Recipients also will be employed in a part-time capacity or demonstrate evidence of volunteer hours of on-campus service.

“For me, it is important these students understand this is not a hand-out but a hand-up to help,” Malone said. “Working part-time and/or volunteering helps students understand the importance of work. It is my hope this gift will create good pharmacists who will give back to their community.”

In April, Malone was named the School of Pharmacy’s 2018 Alumnus of the Year. He has spent his career fighting to represent the interests of those who may be otherwise overlooked: namely, children, sick or incapacitated people and those living below the poverty line.

Originally from the small Mississippi Delta town of Rosedale, Malone’s parents had little education but a strong work ethic.

“I came from a meager background,” Malone said. “My mother told me, ‘The way out of poverty is through education.’”

As a sixth-grader, Malone began working as a soda jerk in his local pharmacy, Lewis Drug Store, where he decided to become a pharmacist. After graduating from Rosedale High School, he completed his pre-pharmacy requirements at Delta State University before coming to the UM School of Pharmacy.

After graduating, Malone found himself in Arkadelphia, Arkansas, one Sunday afternoon, speaking with I.B. Fuller, owner of a local drugstore, about a job. Fuller was looking to pass down the business, and Malone was looking to set down roots. Soon thereafter, Malone had stock in his first pharmacy.

From there, Malone went on to become one of the state’s top pharmacy innovators. He founded AllCare Pharmacy in 1972, which has grown to more than 17 community pharmacy locations across Arkansas.

As a pharmacist and businessperson, he focused on finding ways to be more efficient and patient-oriented. Malone’s concern for the consumer stemmed from the understanding his background had given him of not being able to afford medicine.

In an effort to do more for patients, he ran for state government, and in 1995, began his first of three terms as an Arkansas state lawmaker.

“As a representative, Percy worked to bring generic drugs into Arkansas pharmacies, and the traditional pharmacists did not like that,” Donna Malone said. “But he fought and prevailed, and now every drugstore in America has generic drugs available. He passed his savings on to the consumer.”

As one of the only people in the Arkansas Legislature at the time with a health-care background, he also advocated allowing pharmacists to administer immunizations and worked to pass evidence-based medicine in the state.

Besides health care advocacy, Malone stumbled upon what would become his other focus while in the legislature. On his first day in office, Malone read a news article he couldn’t forget about an abused and neglected child. From then on, he made it his mission to introduce at least one measure per legislative session aimed at protecting children.

Along with his wife, he helped expand the Children’s Advocacy Centers of Arkansas, where children can go to report abuse. Because of this, as well as the numerous child protection laws he initiated, the Children’s Advocacy Centers of Arkansas honored him with the first Senator Percy Malone Child Protection Award in 2010, which honors a strong child advocate in Arkansas each year.

Malone spent 18 years in the legislature, eventually becoming a senator for five terms, befriending then-future President Bill Clinton and continuing to fight for the vulnerable. He also has been lauded for his work pioneering innovative health-care solutions that benefit assisted and long-term care facilities and their residents.

Pharmacy Dean David D. Allen lauded the Malones for their generous spirit and desire to help students in need.

“We are honored to know Percy and Donna and are grateful for their gracious gift, which will help generations of our students reach their goal to become pharmacists and one day hopefully return the favor to young people in their own communities and beyond.”

To make a gift to the UM School of Pharmacy, visit give.olemiss.edu or contact Port Kaigler, development officer, at 662-915-2712 or port@olemiss.edu.