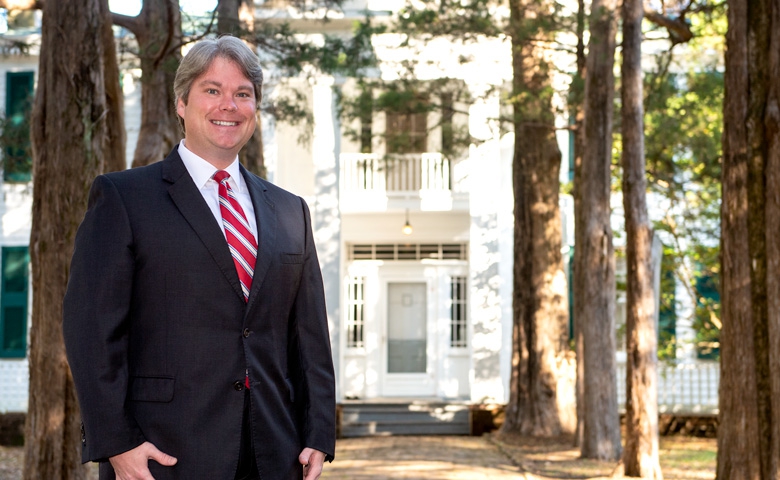 As a new associate director of development for the University of Mississippi, alumnus Robert T. Jolly hopes to strengthen existing relationships while exploring new bonds that will help secure the future of the arts at Ole Miss and in the region.

Jolly is responsible for garnering support for the Gertrude C. Ford Center for the Performing Arts and the University Museum and Historic Houses, such as Rowan Oak, home of the world-renowned Nobel Prize- winning author William Faulkner.

“In the scope of just one day, visitors to the university have the opportunity to visit the Museum to view the South’s finest collection of Greek and Roman antiquities in the morning, walk in William Faulkner’s footsteps at Rowan Oak during lunch, and enjoy the Moscow Ballet performing at the Ford Center that evening. How cool is that!” Jolly exclaimed. “Without private support, none of that is possible.”

Jolly looks forward to helping donors match their philanthropic passions in ways that enrich the academic, research and service missions of his alma mater.

“This job allows me to share my love for Ole Miss with a diverse group of people who are deeply dedicated to the success of the extraordinary arts and cultural programs housed here on the Oxford campus,” said Jolly, a native of Columbus, Mississippi, who earned a bachelor’s degree in southern studies from UM in 2002 and a juris doctorate from the Ole Miss Law School in 2006. As an undergraduate, he was a member of the Chancellor’s Leadership Class and Alpha Tau Omega fraternity.

After graduating from law school, he served as a judicial law clerk for Chief U.S. Magistrate Judge John M. Roper for two years prior to joining the law firm of Watkins, Ludlam, Winter, and Stennis.

In 2013, Jolly had the opportunity to join the UM legal staff as a law fellow in the Office of General Counsel. In 2015, he was named assistant general counsel for the university.

“I have always admired the important work performed by the University Development team and have seen the positive impact of building resources in order to have top-tier programs,” Jolly said.

Vice Chancellor for Development Charlotte Parks said Jolly will be of great value to her staff and to the university as a whole.

“We are excited to welcome Rob onboard,” she said. “He is already proving to be a great asset in helping nurture existing donor relationships with supporters of the arts. Given his love for and knowledge of the university, we have great expectations for the coming year.”

Jolly said private support is especially important for the development of the arts on campus.

“The arts are crucial to understanding where we came from, who we are and where we’re going,” he said.

“By being housed on a college campus, the Ford Center, the Museum and Rowan Oak are uniquely positioned to serve a wide range of individuals for multiple purposes,” he continued. “For example, students not only have the opportunity to attend a Broadway show at the Ford Center, they also have the opportunity to perform there — a world-class arts and entertainment venue.

Jolly is a sixth-generation Mississippian who met his wife, Rebecca, in law school. Now, she serves as general counsel for a private wealth investment advisory firm in Memphis. The couple has a 2-year-old son and another son expected in March 2019.