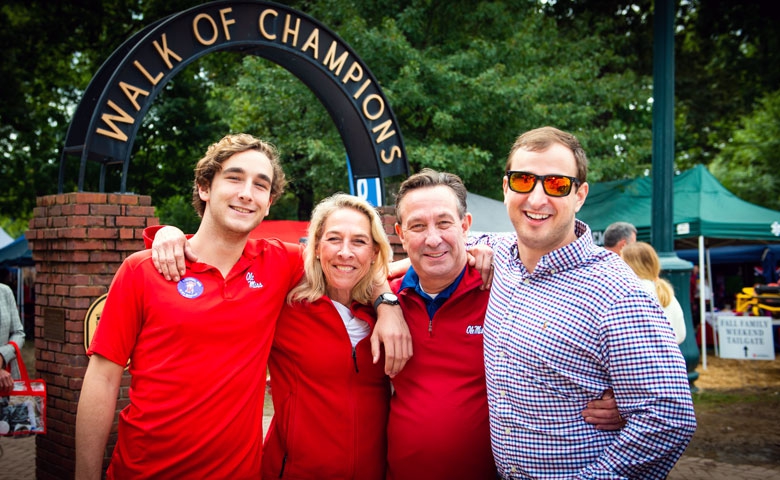 Shelley and Scott Ririe (center) recently honored their sons James (left) and Mike (right) by establishing the Ririe Family Scholarship Endowment with a $300,000 gift to the UM School of Business Administration.

Like so many University of Mississippi students, Mike Ririe fell in love with Ole Miss during a campus visit.

As a high school junior in 2004, the St. Louis, Missouri, native and his dad, Scott Ririe, attended their first Rebel football game preceded by festivities in the Grove and a campus tour.

“We never visited another school after that day,” said Scott Ririe, founder and co-president of Control Technology and Solutions (CTS), an energy service company based in St. Louis.

Mike Ririe has since graduated from Ole Miss with a bachelor’s degree in business administration and is a commercial real estate agent in Chicago, Illinois. His brother, James Ririe of St. Louis, is on track to graduate from the UM School of Business Administration in 2020.

The Ririe brothers’ love for their university spread to their parents who recently made a $300,000 gift to establish the Ririe Family Scholarship Endowment, which will award $6,000 a year for up to eight semesters to two St. Louis freshmen in the School of Business Administration.

The Riries designated the scholarship for students in their area because “the amount of local groundswell to attend Ole Miss in the St. Louis area is growing,” Scott Ririe said. “We viewed this as a way to give more kids the opportunity to attend the university when they may not have had the chance due to their financial circumstances.”

UM School of Business Administration Dean Ken Cyree thanks the Riries for their generosity.

“It’s always so encouraging to see parents of our students grow to value their children’s education so much that they want to help others have the same experience here,” he said. “We are very grateful to Scott and Shelley for their gracious support that will help generations of business administration students realize their dreams.”

Scott Ririe graduated from Cornell College in 1979 and his wife, Shelley, is a 1981 graduate of the University of Iowa. Yet now they proudly support Ole Miss.

“Our family has become attached to Ole Miss through our boys and their love and loyalty to the university,” Scott Ririe said. The couple also has two other grown children: Andy, a paramedic studying to become a physician’s assistant, and Elise, who graduated from the University of Dayton (Ohio) and is a pharmaceutical sales representative living in Cleveland, Ohio.

Scott Ririe began his career working in sales for Honeywell International Inc. in Des Moines, Iowa. He became service sales manager in 1984 and moved to St. Louis, where he was soon promoted again to district general manager. In 2000, he and a business partner founded CTS, which has grown to become the CTS Group, operating in nine states with over 124 employees and revenue of more than $100 million a year.

Scott Ririe serves on the executive committee as treasurer for National Association of Energy Services Companies (NAESCO) board of directors and the board of Midwest Easter Seals Association. He also has served on the advisory boards for General Motors and (along with his wife) Ranger Bass Boats.

His high school sweetheart and wife of 36 years, Shelley Ririe began her career with Revlon Inc., marketing cosmetics to retailers. She then joined Ormco, an orthodontic supplier. Today, she owns Branson West Marine and Powersports, which coincides nicely with the Riries’ favorite activities.

“We love the water,” said Shelley Ririe, a member of the Ranger Bass boats advisory board. “We have a home on Table Rock Lake in Branson (Missouri) and we enjoy boating, jet skiing and entertaining there.”

To make a gift to the School of Business Administration, visit www.umfoundation.com/makeagift or contact Tim Noss at 662-915-5932 or tlnoss@olemiss.edu.