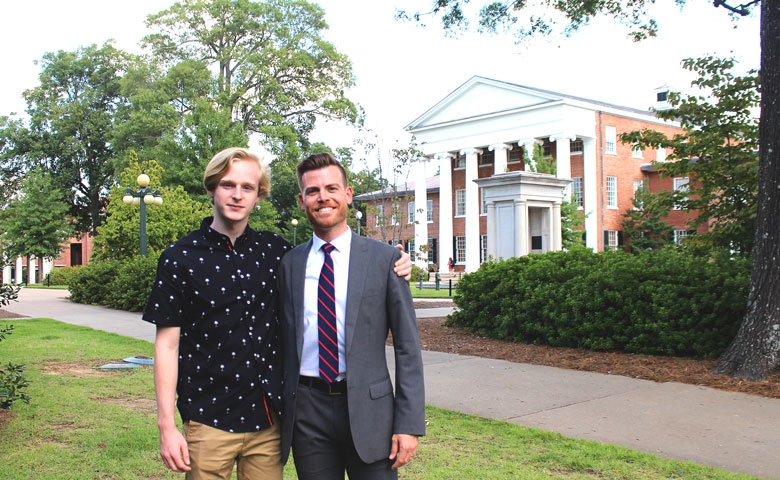 While unloading a truck at his part-time job at Walmart, Steven Swinford received news that he had been awarded the first Dr. Bonita Lyons and ZonaDale L. Taylor Legacy scholarship at the University of Mississippi. His immediate response was disbelief.

“I said, ‘Me? No, not me. I’ve never gotten anything like this,'” Swinford explained. “I’ve always been in the background, and I don’t receive help.

“This really boosts my confidence and self-esteem. It makes me feel like I can achieve whatever I want.”

A graduate of Northeast Mississippi Community College, Swinford is on track to earn his Bachelor of Social Work in August 2019 after completing 18 hours this fall, 19 hours in the spring and a required summer internship.

“It’s stressful, but it’s worth it,” Swinford said.

He explained that while his family offers praise for his dedication to higher education, he is the first in his immediate family to pursue a four-year degree.

“I wanted to go a step further to see if I can achieve something even bigger – to make sure I have the willpower to do what I want to do later in life,” Swinford said.

His passion for social workers’ role in mental health drives his ambition.

“I plan on working in mental health because I’ve struggled with it and so have all my friends,” Swinford said.

“In fact, 65 percent of all mental health professionals are social workers,” said Lefmann, who advises Swinford and nominated him for this scholarship.

Swinford is exploring options for graduate study and career paths where he can apply his passion for mental health, including public policy, public health, education and gerontology.

Playing a role like his adviser, Lefmann, a licensed social worker who also teaches in the department, is an enticing idea, Swinford said.

“I really can’t put my finger on what I want to do yet exactly,” he said. “I know I want to be that person who can help guide a person, an advocate.

“I want to show people they have potential and help them believe in themselves, because I have a hard time believing in myself sometimes. Everybody needs someone like Drew.”

Lefmann described Swinford as determined, noting that he commutes from his home in Potts Camp to work in New Albany and to school in Oxford.

“I’ve worked with Steven as he has tried to figure out what he can handle, what is reasonable and what is too much,” Lefmann said. “He has been really open to the advising process, and I believe this has helped him to be successful. He is so open and engaged in advising, and I hear from faculty how open and engaged he is in classes, too.”

Teresa Carithers, interim dean of the School of Applied Sciences, met with ZonaDale Taylor, of Collierville, Tennessee, when she established the scholarship endowment in honor of her late sister, Bonita Lyons, an Ole Miss alumna and former director of academic status and retention services for the University of Memphis.

After meeting Swinford, Carithers was persuaded that he possesses the true spirit of this award.

“He is actually the epitome of the student they were looking for,” Carithers said. “What really amplified our gratitude for this wonderful gift was the overwhelming numbers of students we identified during our selection process needing this kind of assistance.”

The Dr. Bonita Lyons and ZonaDale L. Taylor Legacy Endowment is open to gifts from individuals and organizations. To contribute, send checks with the endowment name noted in the memo line to the University of Mississippi Foundation, 406 University Ave., Oxford, MS 38655; or visit http://www.umfoundation.com/makeagift.

Planned gifts award donors membership in the 1848 Society, named for the year the university welcomed its first students.

For information on including Ole Miss in long-term estate planning, contact Sandra Guest at 662-915-5208 or sguest@olemiss.edu.