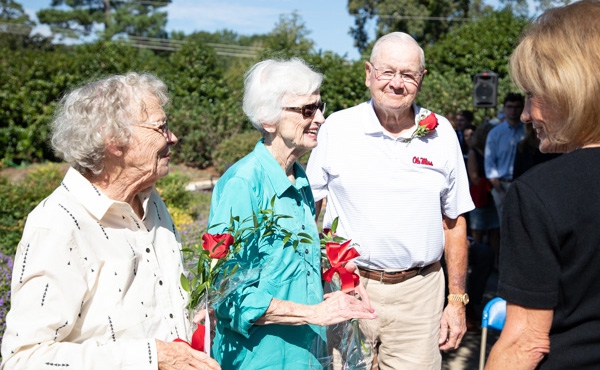 Dr. Gerald M. “Doc” Hollingsworth and his siblings have always been close.

Growing up in Centreville, Mississippi, his sister, Jo, two years his senior, considered herself literally her brother’s keeper.

“Jo taught me how to tie my shoes, comb my hair and brush my teeth,” said Hollingsworth, now of Niceville, Florida, and a 1953 University of Mississippi graduate. “She’s got a special place in my heart.”

In turn, Hollingsworth would dote on his baby sister, Billy Nell.

“They’re very sweet sisters. I guess mainly they remind me of my mother — the sweetest woman I ever knew,” said Hollingsworth, who recently established a $500,000 planned gift to establish two scholarships in honor of his sisters.

“I hope the scholarships will give students the same opportunity I had when I went to Ole Miss and make it possible for them to get out of a life of financial struggle and become productive citizens and good members of their community,” Hollingsworth said.

Gallant of Centreville and Jensen of Woodville, Mississippi, joined their brother recently beside the OMWC Rose Garden on the Oxford campus, for a ceremony in which the scholarships were officially dedicated.

“We hope that the scholarship is going to help someone who wouldn’t be able to attend the university otherwise,” she continued.

Jensen echoed her sister’s sentiments: “I am extremely honored that my brother made the donation and even more that he included my sister and me.

“The Women’s Council is going to have students so well prepared and hopefully, as they get older and fly their wings, they will help other young students have opportunities like this. I believe his gift will inspire them to do so.”

Hollingsworth has devoted a lifetime to taking care of his patients, monitoring the health of high school athletes, championing competition for intellectually challenged youth and providing major resources for his alma mater’s athletic programs.

Earlier this year he received the 2018 Legacy Award, a prestigious honor that recognizes those who have a lifework of mentoring, leadership, scholarship, and/or philanthropy — characteristics promoted and encouraged by the OMWC.

All of these are descriptive of Hollingsworth. The physician and businessman has mentored many young people and attributes his own successful medical career to mentors in his life.

“Dr. Earl Fyke of Centerville, Mississippi, asked me to go on house calls with him and then shadow him at the hospital,” Hollingsworth said. “He was trying to encourage my interest in medicine. He actually demanded that I attend the University of Mississippi. I was already on the campus of another Mississippi university, and Dr. Fyke came and got me. He provided the necessary resources for me to attend Ole Miss and be successful.

“The other mentor in my life was Dr. Arthur Guyton — author of the world’s most widely used medical textbooks — who steered me to Harvard University for medical school after I finished Ole Miss. Dr. Guyton and Dr. Fyke were the two most influential people in my life, as well as my mother, Irma Blakeney Hollingsworth, who gave me unconditional love and support and made me believe I could achieve my dreams.”

“Doc devoted almost 35 years to serving as the team doctor for Choctawhatchee, Ft. Walton Beach and Niceville high schools. He helped found the All-Sports Foundation of Northwest Florida and helped establish the first chapter of Special Olympics in Florida,” Clinton said. “He has a real heart for young people and this gift makes that even more evident. We greatly appreciate his foresight in helping students succeed academically.”

The OMWC was established in 2000 by a group of female leaders and philanthropists. The Council awards scholarships to both young women and men based on their academic performance, desire to give back to society and successful interview process. Council members are committed to nurturing the development of the students through mentoring, leadership development, cultural experiences and travel opportunities.

In its 18th year of existence, the OMWC scholarship endowment stands at more than $13.1 million. The $32,000 named scholarships are awarded each year and have grown to be among the largest on campus. Thus far, 145 OMWC scholars have benefited from the program.

Hollingsworth has also provided a number of generous private gifts to ensure that Ole Miss Athletics programs have the resources to provide student-athletes with competitive opportunities and state-of-the-art facilities, as well as to enhance the fan experience.

Hollingsworth said he believes in athletic competition on all levels for its many benefits: “It develops the mind, body and personal confidence, giving athletes a sense of accomplishment. It expands participants’ horizons, helps them meet people and make friends — competition adds spice to life!”

Now retired, Hollingsworth saw much success not only with his medical practice but also with automobile dealerships and a real estate company. After completing a surgical residency at Duval Hospital in Jacksonville, Florida, he was a U.S. Navy flight surgeon from 1957 to 1959. The physician began his private surgical practice in Ft. Walton, Florida, in 1960. In 1968, he served as a volunteer physician with Project Hope in Da Nang, Vietnam, treating civilian battle casualties. For many years, Hollingsworth also was a medical examiner for the Federal Aviation Administration.

In addition to the OMWC’s Legacy Award, Hollingsworth been honored with the Amateur Football Award for contributions to the collegiate athletic world by the Ole Miss chapter of the National Football Foundation and Hall of Fame; the Community Service Award by the All-Sports Association of Northwest Florida; and he was inducted into the Ole Miss Alumni Hall of Fame. In 2015, the longtime donor committed $25 million — the largest gift in the history of Ole Miss Athletics — to support the Forward Together campaign and create the Gerald M. Hollingsworth, M.D., Athletic Scholarship Endowment.

When asked about his major support of Ole Miss, Hollingsworth explained: “I love the school so much. Ole Miss took a shy, awkward young fellow and turned him into someone with enough confidence to achieve the things I have achieved. I will never forget what Ole Miss has given for me, the educational foundation and the outstanding experiences.”

Read more about the Women’s Council at www.omwc.olemiss.edu. For information on how to make a gift to support OMWC programming, contact Suzanne Helveston, development associate, at shelveston@olemiss.edu or 662-915-7273.