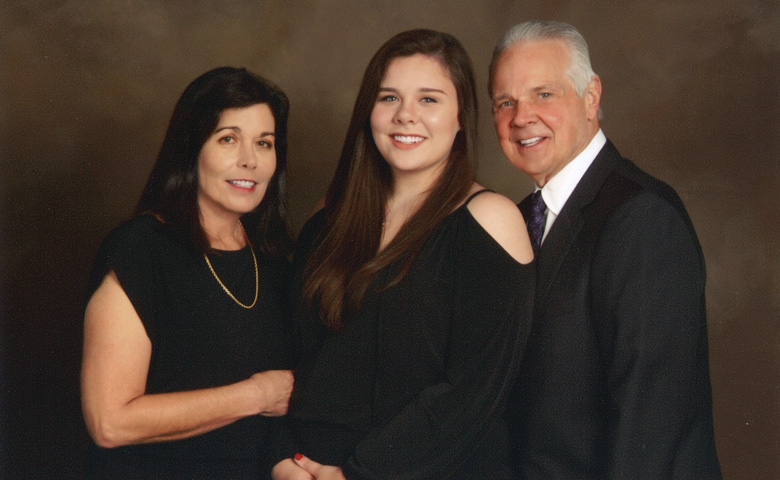 The Duckers, from left, are Cheryl, Rachel and Michael.

While attending the University of Tennessee Nursing School, Phyllis Shane of Kingsport, Tennessee, met her future husband, James. Soon after, she put her dream of becoming a nurse on hold.

Once her children grew up and moved out, Shane decided to pick up where she left off and finish her degree. In 1994, at 60 years old, Shane graduated with a bachelor’s degree in nursing from Gulf Coast Community College and received a standing ovation from her peers.

Shane put an emphasis on education for herself and her children.

“Education was very important for my mother because it empowered women,” Cheryl Ducker said. “So giving to the Ole Miss Women’s Council was an obvious choice.”

Mike Ducker, who attended Ole Miss from 1971 through 1973, is retiring in August after a 43 year career at FedEx. At retirement, he was the chief executive officer and president, international, for FedEx Freight. He and Cheryl met in Memphis in 1989, and have a daughter, Rachel, who is an Ole Miss sophomore.

“The University of Mississippi is very close to our hearts. A gift like this honoring Cheryl’s mother through the Ole Miss Women’s Council (OMWC) is a cause that Phyllis held very dear and is very meaningful to our family."

Since the OMWC establishment in 2000, the group has built a scholarship endowment totaling almost $14.5 million. The $40,000 named OMWC scholarships, which have grown to be among the largest on campus, are awarded each year to both female and male students. Thus far, 145 OMWC Scholars, in addition to a cohort of eight freshmen this 2018-2019 academic year, are the beneficiaries of the program, which provides scholarships, mentoring, leadership development, travel and other cultural opportunities.

The Women’s Council is a group of female leaders and philanthropists committed to nurturing the development of students with a desire to contribute to create a caring, more ethical world. When their careers and personal lives allow, OMWC scholarship recipients are expected to give back to the innovative scholarship program.

Mike Ducker credits his UM education and experience for much of the success he has realized in his life and believes it will have similar results for others. For this reason, he keeps a book of resumes from rising Ole Miss seniors who would be excellent candidates for open positions at FedEX Corporation.

“After all, the brightest and best people from Ole Miss should be FedEx purple employees,” Ducker quipped.

Ducker, who played football for the Rebels, and his wife continue to be engaged in the life of his alma mater. They attend all the Ole Miss football games on the Oxford campus and try to travel to as many away games as possible.

To make a gift to the Ole Miss Women’s Council, send a check with the fund noted in the memo line to the University of Mississippi Foundation, 406 University Ave., Oxford, MS 38655; visit www.umfoundation.com/makeagift; or contact Charlotte Parks at cpparks@olemiss.edu or 662-915-3120. For more information on the OMWC, click here.