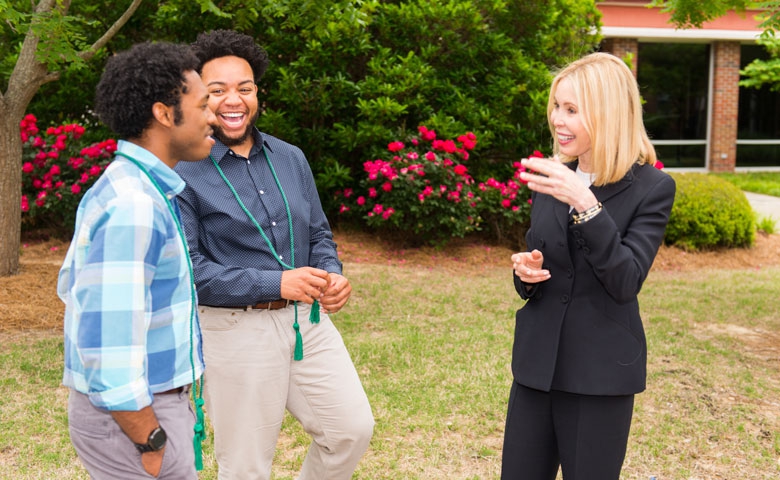 An afternoon spent visiting schools in the Mississippi Delta inspired a University of Mississippi alumna to make a series of gifts totaling nearly $1 million over the past six years, helping to build a program that improves students’ chances of graduating.

The Grove Scholars program is the brainchild of Stephen Monroe, chair and assistant professor of writing and rhetoric and former assistant dean of the UM College of Liberal Arts.

“Stephen is an amazing person; he is brimming with ideas about how to help more students from all types of backgrounds be successful at Ole Miss,” said Pittman, who grew up in Jackson, Mississippi and now lives in Los Angeles, California. “After talking extensively with him it became clear to me that I wanted to help ensure that more Mississippi residents come to the University of Mississippi and graduate with a STEM degree.”

Monroe and Pittman realized OMO recipients interested in STEM would benefit from a bridge program that would help orient them to the university and college-level work. With Pittman’s support, 12 OMO scholars were selected for the program in the summer of 2014. Since then, the program has grown to serve over 70 students and consists of classes in math and sciences for academic credit as well as tutoring, social events and exposure to labs and lectures on campus — all occurring in the summer before the students’ freshman year.

Because the OMO scholarship does not cover summer tuition, the Grove Scholars program also provides students with opportunities to take summer classes throughout their undergraduate career. The newest initiative of the program provides financial support for Grove Scholars seeking a career-relevant internship during the summer term.

Students find that being introduced to college life prior to their freshman year gives them a chance to bond with each other and with the program’s director, Gray Flora.

“What’s so great about what Renvy’s done is she’s enabled a lot of students to have what they need over and above their scholarships,” Flora said. “It’s one thing to say, ‘Yes, you can come to the University of Mississippi,’ but it’s another thing to give them the tools and the equity to really be able to thrive at a major public university.

“It’s more than just being able to come. You have to know how to navigate this place,” he continued. “There are all these extracurricular needs that you don’t think about and Renvy has enabled us to provide those for the students. That’s the difference between access and true equity.”

Jontae Warren, of Booneville, is a Grove Scholar who graduated in May with a bachelor's degree in pharmaceutical sciences and has already transitioned into the School of Pharmacy's Pharm.D. degree program. After completing that, he plans to pursue a residency and ultimately specialize in pediatric pharmacy related to oncology.

“The Grove Scholars program allowed me to meet other students who had the same aspirations as I, and we were able to become a support system for each other,” Warren said. “I am still great friends with many in my cohort today.”

“It’s a community,” Pittman says. “Students need community to be successful in college. So Grove Scholars identifies these young people, brings them in and empowers them to unlock their potential and encourage each other.”

Warren says being a Grove Scholar helped him financially, academically and emotionally.

“Both (former program coordinator) Ben Pinion and Gray Flora have been great mentors and anytime I needed advice on what to do next, their doors were always open,” he said. “I am very thankful to have been a part of this program and hope that it continues to grow.”

Pittman hopes so too.

“I would like to look back after 10 years and see these kids, who are not children anymore at all, using their degrees in science, technology, engineering or math to make their communities in Mississippi a better place,” she said.

Chancellor Jeffrey Vitter said he greatly appreciates the support of alumni like Pittman who want to play an active role in the university’s vision to have a transformative influence in communities throughout the state.

“Our hope is that as students from disadvantaged areas graduate from Ole Miss, their lives and those of generations to come will be significantly enhanced, which will help advance their communities and make great improvements for our state and ultimately our nation,” he said. “The Grove Scholars program is a key component of the big picture — to truly make a significant impact upon the world around us. Renvy has set an example of generosity that I hope others will want to follow.”

About the Grove Scholars

The Grove Scholars Program provides an intensive academic program to encourage and facilitate academic success and job placement among Mississippi resident STEM majors who have also received the OMO Scholarship. The program is unique in that it has a strong focus on career-readiness. It is intensive in nature and takes a year-round approach to student development. Grove Scholars begins with a bridge program the summer before students traditionally come to campus and uses an incentive-based model to encourage students to perform in the classroom, become involved on campus and make the most of summers and other breaks in the academic calendar. To visit the Grove Scholars website, click here.

The University of Mississippi is committed to providing access to quality education for students from all backgrounds. Through its OMO program, the university guarantees that eligible Mississippi resident students will receive financial aid in the fall and spring semesters to cover the average cost of tuition, residence hall housing and an allowance for meals. This program will fill the gap in funding after all federal, state, institutional and private scholarships and grants awarded to the student have been considered.