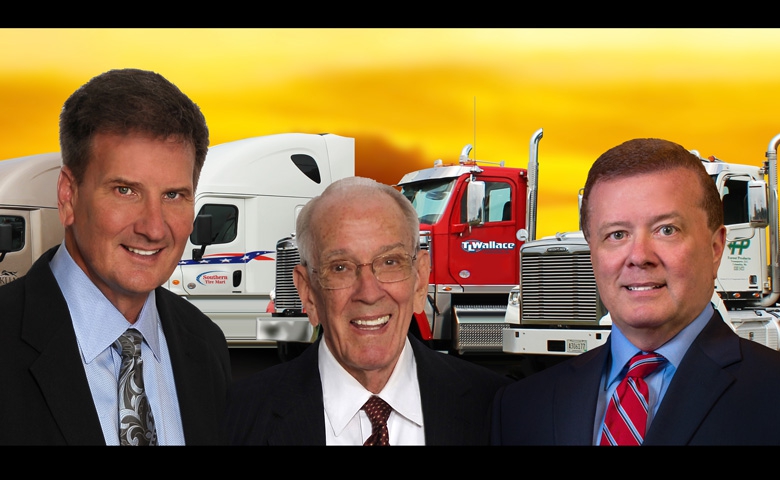 The late Ernest Duff, center, is being remembered by his sons Jim Duff, left, and Thomas Duff with a major gift to the University of Mississippi’s Flagship Constellations. Similar to this new initiative that uses a multidisciplinary approach to challenges, attorney Ernest Duff had an entrepreneurial spirit and was known to respond to opportunities with solutions.

The youngest of five children and the first in his family to pursue higher education, Ernest Duff left his small home town of Columbia to attend the University of Mississippi, where "his eyes were opened and his mind enlarged."

Now sons Thomas and Jim Duff, of Hattiesburg, have made a $1 million gift to pay tribute to their father's life and to support the university's new Flagship Constellations initiative – multidisciplinary teams composed of faculty, staff and students from the university's Oxford and Medical Center campuses seeking significant, innovative solutions to complex issues.

"Each of us stands on the shoulders of those who came before us, and our father certainly did that," businessman Thomas Duff said. "The education he received, the opportunities that were given to him, he utilized those throughout all of his life. The power of an education enriched his life, his family, his grandchildren and his great-grandchild. We are very grateful for that legacy and what Ole Miss has meant in each of our lives.

"My father loved the University of Mississippi. He was elected student body president and inducted into the student Hall of Fame. He enjoyed college so much that he spent the next three years in the School of Law, where he was active on the Mississippi Law Journal staff and graduated No. 1 in his class."

Education was an important part of his father's life, as well as the mentors and friends who came with it, Jim Duff said.

"I remember as a kid hearing all these wonderful stories about different individuals, professors and students at Ole Miss who had a big influence on his life – who helped mold him into the person that he became," Jim Duff said. "And he became the type person who changed many, many lives.

"Ole Miss is such a special place to our family because of him. It's such a unique institution, and he would be extremely proud and pleased with this gift. He would want to give back to Ole Miss."

Chancellor Jeffrey Vitter thanked the Duffs for their strong support of the Flagship Constellations, an initiative that brings together the brightest minds across all areas of the university to inspire and accelerate meaningful solutions to some of our greatest challenges.

"With this gift, Thomas and Jim Duff have created the Ernest R. Duff Flagship Constellation Fund to commemorate their father's great love for Ole Miss," Vitter said. "Ernest Duff was a leader and a visionary – what a tremendous way for them to honor their father and ensure his continued impact and legacy.

"This support will enable us to ignite the potential of the Flagship Constellations. We are extremely grateful to the Duff family for choosing such a meaningful gift to the University of Mississippi as a means of remembering their dad."

Similar to the Flagship Constellations initiative, Ernest Duff had an entrepreneurial spirit and was known to respond to opportunities with solutions. As a successful corporate attorney, he worked with many major businesses, and while serving as an attorney for Georgia Pacific in Columbia, he saw a need, filled it and, as they say, the rest is history.

The company needed someone to haul wood chips, so Duff founded Forest Products Transports. The trucks needed tires, so he established Southern Tire Mart, which has become the largest commercial tire dealer in North America.

Southern Tire Mart led to the formation of Duff Capital Investors, which is composed of 19 various businesses employing more than 11,000 people with total revenues exceeding $ 2.2 billion. Duff Capital Investors is one of the largest private companies in Mississippi and includes KLLM Transport Services of Jackson.

Duff, who passed away in May 2016, served as city attorney in Columbia for 32 years, Marion County attorney for 36 years and Pearl River Valley Electric Power Association attorney for 53 years; he was a director of Trustmark Bank for 28 years.

His sons, Thomas and Jim Duff, both University of Southern Mississippi alumni, lead Duff Capital Investors as co-owners. In 2012, in recognition of their significant contributions, USM named its athletics center the Jim and Tom Duff Athletic Center.

Thomas Duff serves on the board of trustees of the state Institutions of Higher Learning, the governing body responsible for policy and financial oversight of the state's eight public universities. He also serves on the Mississippi Power Board of Directors.

For more information on providing support for the Flagship Constellations, contact Vice Chancellor of Development Charlotte Parks at cpparks@OleMiss.edu or 662-915-3120; or visit http://flagshipconstellations.olemiss.edu.