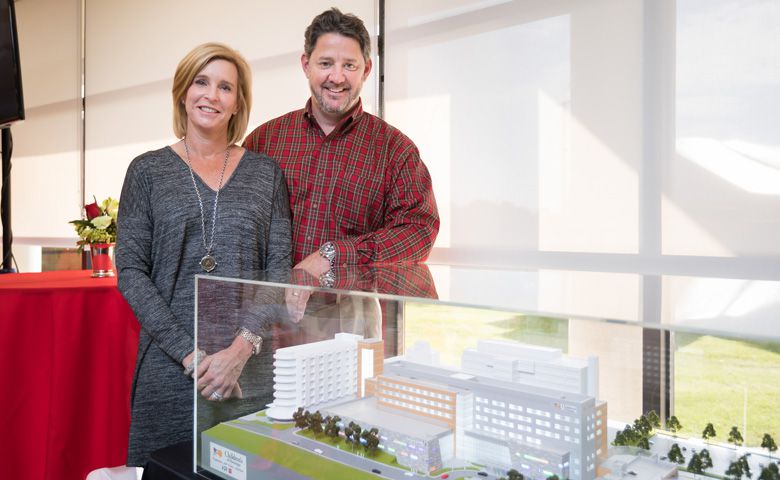 Priscilla and Dave O'Donnell show where their gift to the Campaign for Children's of Mississippi is going -- to help fund construction of a new children's tower, shown here in model form.

Dave and Priscilla O’Donnell are committed to the construction of a new seven-story children’s tower adjacent to Batson Children’s Hospital and have expressed this commitment with a $1 million gift to the Campaign for Children’s of Mississippi. With this gift they are funding the Priscilla and David O’Donnell Pediatric Intensive Care Unit Cardiac Wing.

The new PICU unit, to be located on the west side of the new Children’s of Mississippi tower, will provide 12 cardiac beds dedicated to the medical and surgical (including pre and post-operative) care for children with congenital heart defects.

“This gift will make an enormous difference in the health of our sickest cardiac patients,” said Dr. Brian Kogon, chief of pediatric cardiothoracic surgery for Children's of Mississippi. “We are so grateful for this gift and for the O’Donnells’ concern for our patients’ care.”

Dave’s project management background and his career as executive vice president of the Bowers Group, a mechanical contracting firm in Washington, D.C., might make one think the building process would pique the couple’s interest.

Instead, it was their tour of Batson, the state’s only children’s hospital, that captured their thoughts.

The couple, who together have five daughters ages 20 to 29, divide their time between Mississippi and Baltimore, Maryland. The importance of children and family are values the two share.

A Mississippian by way of Florida, Priscilla has long known of Batson Children’s Hospital, which reached its 20th anniversary this year.

“Because I remember when it opened,” Priscilla said of the Batson tower, “I continue to think of it as new.”

Seeing the neonatal intensive care unit, where, frequently, three times the number of babies for which it was designed are cared for, and other pediatric care areas was eye-opening.

“More space is needed for those babies,” she said, “and I feel for those families and their need to be with their children.”

The new children’s tower will include 88 private NICU rooms in addition to additional pediatric intensive care unit space; 10 more operating rooms; an imaging center designed for children and a pediatric outpatient specialty clinic. The Children’s Heart Center, the only pediatric cardiology program in the state, will also have its own space as part of the project.

Construction of the tower begins this month.

“We have always thought about doing some sort of charitable giving,” Dave O’Donnell said, “and seeing the conditions at the current Batson Children’s Hospital was really a heart-wrenching experience. The doctors and nurses there are excellent, but they need a facility that matches their skill.

“We felt like we should do something for others,” he continued, “and it’s a good feeling to have the ability to do this. We’re just ordinary people who have been blessed with good luck and success.”

Priscilla said their commitment, as well as the groundbreaking event for the new facility, occurring during the holiday season makes it more meaningful.

“We both feel really, really good about this.”