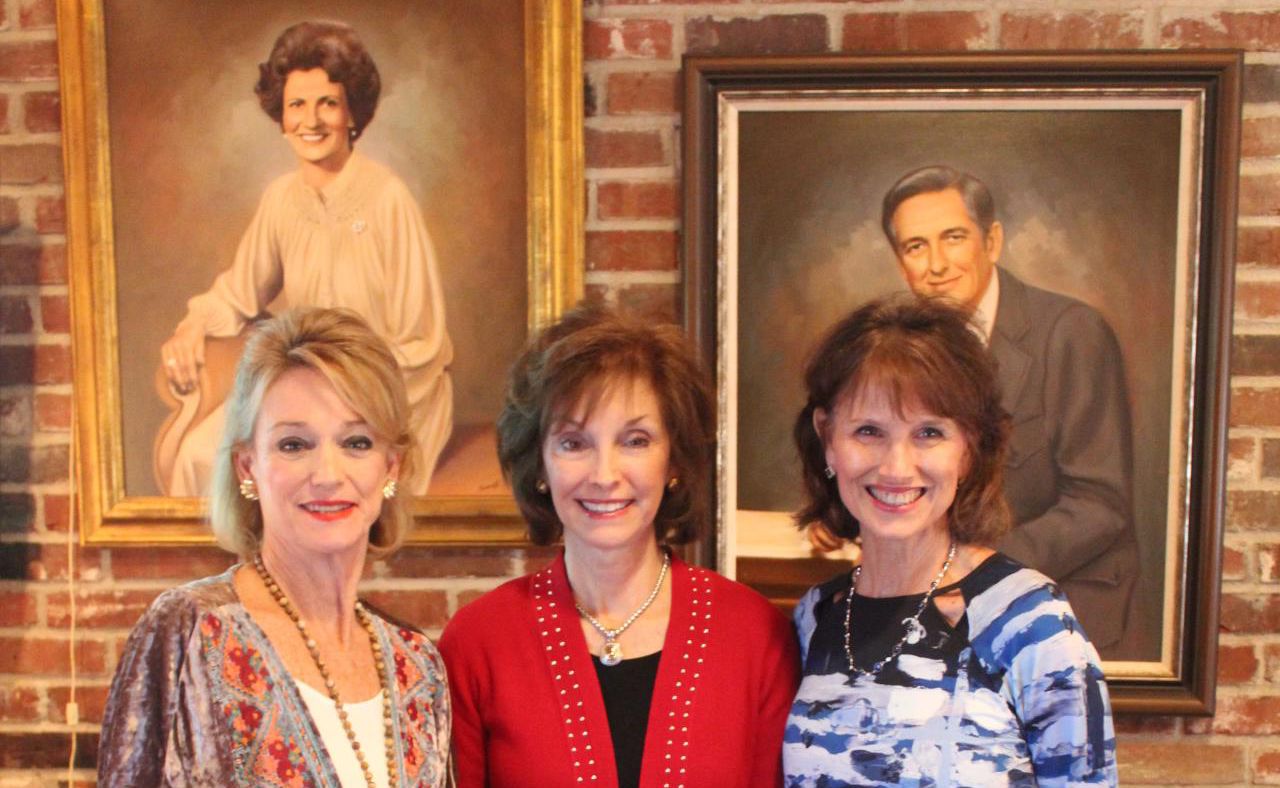 Known during their growing-up years in Oxford, Mississippi, as the “Hickman Girls” — Jenny Hickman Poole, from left, Debbie Hickman Little and Lisa Hickman Tollison — have created two scholarships at the University of Mississippi to pay tribute to the lives of their parents, Dewey and Will Hickman, longtime advocates for Mississippi’s public universities, public schools and community organizations. They are pictured by portraits of their parents.

The late Dewey and Will Hickman were known for their deeply committed service to the University of Mississippi and the state’s other universities, the Oxford-Lafayette County community and its economic development, local schools, their church and — most of all — their three daughters.

“Our parents led by example, with the message being to us that demonstrating love and loyalty to each other is an important value,” said daughter Jenny Hickman Poole of Batesville, Mississippi.

Now those daughters — known around Oxford, Mississippi, as the “Hickman Girls” — are expressing that affection and devotion by establishing two scholarships at Ole Miss to pay tribute to their parents. Poole and sisters Debbie Hickman Little and Lisa Hickman Tollison, both of Oxford, have funded the Will A. and Dewey C. Hickman Memorial Law Scholarship Endowment for full-time students in the School of Law who are Mississippi residents and have financial need.

The second scholarship they have endowed is the Will A. and Dewey C. Hickman Memorial Scholarship Endowment designated for full-time students who are community college transfers and Mississippi residents with financial need; first preference will be given to students in the School of Business Administration.

“When we lost our parents, we knew we wanted to do something for these special people who did so much for others,” Poole said. “Their love for Ole Miss was so strong and such an important part of their lives that establishing something at the university in their names seemed appropriate.”

“Our parents left a wonderful legacy of dedication and service, which we want to memorialize with this gift,” said Little.

The designation of the new scholarships models the Hickmans’ paths in higher education. After losing his father at the age of 12, Will Hickman, a native of Monticello, Mississippi, attended Hinds Community College on a basketball scholarship while performing custodial duties on campus. Meanwhile, Dewey Hickman graduated as salutatorian of Meadville (Mississippi) High School and enrolled at Copiah-Lincoln Community College.

“They educated three daughters, who earned degrees from Ole Miss, and were instrumental in educating their seven grandchildren,” said Tollison. “Although we were blessed, not everyone gets the same opportunity to receive a formal education. Our parents would be very pleased to know these scholarships will aid other young men and women.”

Will Hickman, a senior law partner with Hickman, Goza and Spragins, made far-reaching contributions as part of the leadership on the board of trustees of state Institutions of Higher Learning for 13 years, where he served a term as president. The IHL is the governing body responsible for policy and financial oversight of the eight public universities of Mississippi.

Little said that Hickman’s experience in desegregation and civil rights cases within public schools and with Ole Miss made his service “valuable” on the board of trustees during the Ayers case, a civil rights case that sought to correct inadequate funding for Mississippi’s three historically black universities. “My dad was an advocate for educational opportunities for everyone.”

UM Chancellor Jeffrey Vitter praised the daughters for choosing to honor their parents through student scholarships.

“Dewey and Will Hickman were outstanding alumni who will always be part of this university. We are extremely grateful to their daughters for this gift of scholarships bearing their names and reflecting their parents’ strongly held belief in extending educational opportunities to others.

“Will Hickman provided transformational leadership and service to the IHL board that will be felt for generations of students attending Mississippi’s eight public universities. Likewise, Dewey Hickman was a source of unwavering support to her husband throughout this meaningful service and also worked tirelessly to strengthen Ole Miss, local schools and other institutions. Their generous spirit could be seen in that they often opened their home for Ole Miss events,” the chancellor said.

Will Hickman served in the U.S. 5th Army, commanded by Mark Clark, in the Italian Theater during World War II, fighting all the way to France. Afterward he enrolled in Millsaps College, where he met the love of his life, fellow student Dewey Cobb. After graduation they married, moved to the Oxford campus and lived in the “Vet Village” while Hickman earned his law degree from Ole Miss. Dewey Hickman taught school in Abbeville for five years and earned a master’s degree in business administration from the university. They had planned to move back home to south Mississippi but chose to remain in their adopted hometown of Oxford.

Will Hickman served Oxford as mayor pro tempore and as an alderman for two terms. Appreciation for his contributions were recognized in 1986 when he was honored as Oxford’s Citizen of the Year. Hinds Community College named him Alumnus of the Year in 1988. He was inducted into the Ole Miss Alumni Hall of Fame and received a Lifetime Achievement Award from the university in 1996. The Ole Miss School of Law selected him as its 1998 Alumnus of the Year.

“They fell in love with Ole Miss and Oxford,” said Little. “They were the typical Southern couple, stately and courteous. Mom was the serious one, and Dad had an excellent sense of humor. He was a good man to have on your team. Dad always gave credit to Mom whenever he was recognized. Mom was the creative, behind-the-scenes person. She had a servant’s heart and wrote notes of encouragement to people all her life. They believed the family unit to be critical, with Dad often saying, ‘If you don’t maintain close family ties, you’ve lost something that will be difficult to regain.’”

Poole said the words that come to mind when describing her parents are “commitment, hard work, determination, giving and family.”

Dewey Hickman was named Woman of the Year by the Business and Professional Women’s Club of Oxford. She taught business communication at Ole Miss for a year. She was active in the community and the First Presbyterian Church for many years. Leadership positions included chair of the Easter Seal Campaign, secretary of the Lafayette County Library Board, member of the V.F.W. Auxiliary and the Oxford Army Advisory Committee, and president of the Cosmopolitan and Oxford Garden clubs.

“Our parents were heavily involved in all our activities,” Poole said. “They drove us to everything — cheerleading, Girl Scouts and more. They gave so much of their time and resources to the community but they were always present for their daughters.”

Both the Will A. and Dewey C. Hickman Memorial Law Scholarship and the Will A. and Dewey Hickman Memorial Scholarship Endowment are open to accept gifts from individuals and organizations. Send checks to the University of Mississippi Foundation, with the fund(s) noted in the memo line, to 406 University Ave., Oxford, MS 38655; or give online at http://umfoundation.com/makeagift. For more information contact William Kneip, development officer for the College of Liberal Arts, at 662-915-2254 or kneip@olemiss.edu.