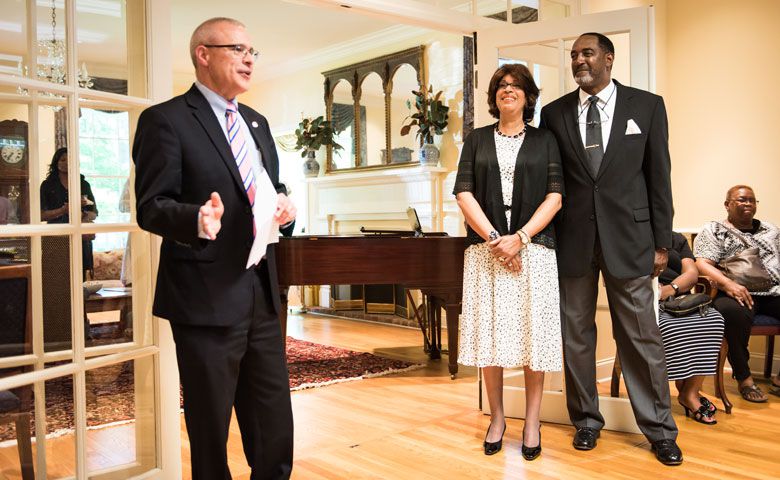 During her retirement reception in 2016, Lennette Ivy and her husband, James Ivy, smile as UM Provost Noel Wilkin discusses her longtime service to the university.

A new scholarship within the University of Mississippi School of Applied Sciences will honor the late Lennette Johnson Ivy, professor and chair emerita of the Department of Communication Sciences and Disorders.

Established by her husband James Ivy and the Department of Communication Sciences and Disorders, the scholarship, once endowed, will provide travel support for first-year and second-year graduate students as well as faculty attending state and national conferences. The funds will also support the department’s annual Fall Institute Lecture.

“The endowment will provide historical context to and long-term recognition for the contributions that Dr. Ivy made to the department and focuses on support to help students be successful professionals,” said Interim Dean of School of Applied Sciences Teresa Carithers. “The funds will help students majoring in communication sciences and disorders to have the opportunity to travel to professional conferences and to help provide support to bring nationally recognized leaders to present at the CSD Fall Institute, a student-led continuing education event.”

Gloria Kellum, vice chancellor emerita of university relations and professor emerita of communication sciences and disorders, described Ivy as “a loving and happy person” who always had a smile, a tear or a hug to share when most needed.

“I had this wonderful relationship with her,” said Kellum. “First I taught her as a student, then I worked with her as a colleague, but best of all, she was my friend.”

Ivy joined the UM faculty in 1990 as a part-time clinical supervisor. During the course of her 26-year career, she served the Department of Communication Sciences and Disorders as a clinical supervisor in speech pathology, assistant professor, associate professor and interim department chair.

“She was that person who had a deep appreciation,” said Kellum, her colleague and longtime friend. “She had that extra oomph to her because she was extremely committed to being the very best that she could be.”

Under Ivy’s leadership, enrollment in the department’s undergraduate and graduate program grew significantly, with more than 56 graduate students and 400-plus undergraduates. In 2011, the graduate program was reaccredited nationally under her watch, and master’s degree graduates in speech-language pathology experienced a 100 percent employment rate. The department also saw significant increases in the number of full-time faculty, clinical supervisors and clinical services offered for speech, language and hearing impaired individuals in north Mississippi.

Additionally, Ivy obtained a grant from the Robert M. Hearin Foundation to establish a preschool laboratory and specialty clinic for hearing-, speech- and language-impaired children, as well as transition class for kindergarten children with speech, language and hearing disorders that interfere with literacy skills. She also established an in-house server and computer lab.

“Lennette supervised students and she was able to establish wonderful relationships with students, so she was really able to have a lot of empathy but at the same time a high standard,” said Kellum. “She also had wonderful networks nationally that have benefited the program by expanding our opportunity to work with diverse groups.”

James Ivy of Oxford, Mississippi, said he is not only proud of the contributions his wife made to the university and community at large but also looks forward to the potential impact this new endowment will have on the School of Applied Sciences, the Department of Communication Sciences and Disorders and its students.

“Lennette’s main goal was to always make sure her students were exposed to as much of the profession as possible,” said Ivy. “She wanted Ole Miss students to be the best out there. She would be honored and humbled at the same time.”

A 2014 recipient of the Mississippi Speech, Language, Hearing Association Honors of the Association Award, Ivy held three ASHA Awards for continuing education, a travel support for the 2001 University of Wisconsin at Madison Symposium on Research in Child Language Disorders and a travel fellowship to ASHA’s 11th annual research symposium on “NIDCD-Sponsored Institute: Genetic Paradigms for the New Millennium.”

A respected clinician and teacher in her field, Ivy was the principal investigator on at least seven federally and state-funded projects totaling more than $418,818 and made presentations at more than 26 professional conferences and symposiums. She also co-authored at least six peer-reviewed journal articles and two book chapters.

“Anyone who had the pleasure of knowing Lennette Ivy knew that she had a genuine care for people and valued the relationships and friendships in her life,” said Matthew Porchivina, development director for the School of Applied Sciences. “This endowment will hopefully reflect and do justice to the dedication and passion she put into the university.”

Individuals and organizations may make gifts to the Lennette Johnson Ivy Legacy Fund by mailing a check with the designation noted in the memo line to the University of Mississippi Foundation, 406 University Ave., Oxford, Miss. 38655; visiting www.umfoundation.com/makeagift or contacting Matthew Porchivina at 662-915-1584 or rmporchi@olemiss.edu.