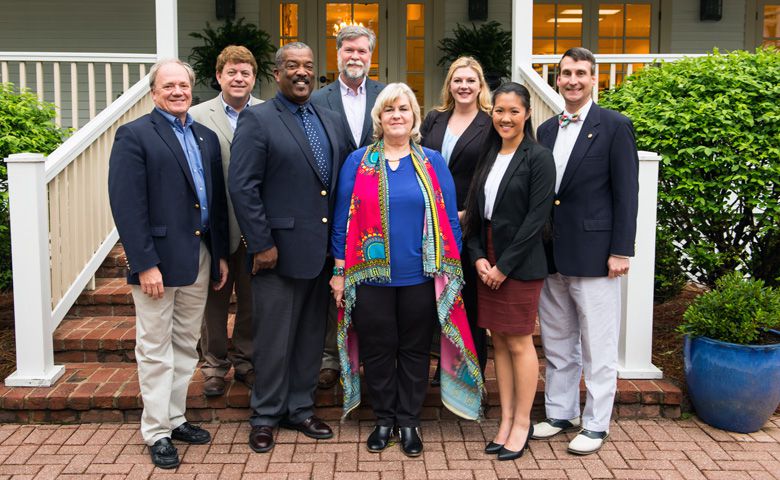 Attending the announcement of the Zach McClendon Memorial Assistantship Endowment were, from left, Wendell Weakley, president and CEO of the UM Foundation; Brian Reithel, professor of management information systems; Percy McClendon; Ken Cyree, dean of the School of Business Administration; Paula McClendon; Ashley Jones, director of MBA administration; Monique Ma, the first recipient of the assistantship; and Scott Taylor, past president of the MBA alumni board.

If you could ask Zach McClendon the secret to success, he might have said something like, “Be who you want to become.”

Before his life was taken, the University of Mississippi graduate student wanted to be CEO of his own neurosurgery practice and he dressed the part every day.

Now, a private gift will honor McClendon’s memory. Members of the MBA Board of Directors worked with the UM Foundation to establish the Zach McClendon Memorial Assistantship Endowment, which will provide scholarships to students in the Master of Business Administration program. The first recipient, Monique Ma of Thiensville, Wisconsin, has recently been announced at a campus ceremony and reception.

Ma said she feels honored by the award.

“I understand that in his time here, Zach was a driven and passionate individual, as well as a dedicated scholar, and I have striven to live up to his name and legacy. As a result, this scholarship has been immensely significant to me, both in my studies and in pursuing my own goals,” Ma said. “Being awarded this assistantship has allowed me the opportunity to continue my higher education and create invaluable connections that I never would have developed otherwise.

“I am extremely grateful to the MBA alumni board, faculty, staff and students for their continued support and encouragement throughout the year, and I trust that future recipients likewise recognize the honor of this award.”

At the ceremony, Percy and Paula McClendon, Zach’s parents, thanked the MBA Board, the dean, faculty and staff of the business school for the legacy the endowment gives their son: “You’ve given us the opportunity to see life in others who are pushing that same pedal to succeed in life and to be the best of the best.”

Zach McClendon, a Gulfport, Mississippi, native had a plan for his life — a life cut short when he was shot during a December 2013 robbery of his residence outside of Oxford. He had just finished his first semester at Ole Miss, pursuing an MBA degree to understand the business side of medicine. He planned to further his education at the University of Mississippi Medical Center campus in Jackson.

“He always wore a tie and a smile,” said Ashley Jones, director of MBA administration. “I first met Zach when he was considering our program. During his campus visit, I knew within a few minutes of our conversation that Zach was a young man who sought success.”

“I don’t think he was an overachiever; he was just really smart,” added Ann Canty, associate professor emerita of management and former faculty director of the MBA program. “He had all these goals in mind, achievements he wanted to accomplish.”

McClendon studied at Ole Miss with support from the Mobile Communications Corporation of America Fellowship in Business Administration.

“While holding the fellowship, Zach’s work and reliability were highly admired by the faculty,” Canty said. “As a student, Zach was inquisitive, open to new ideas, thorough and talented academically and his personality was outgoing — he had a ready smile, was a team player and was always polite.”

“We are grateful for the financial support of the MBA Board, which enables us to honor Zach and we are excited to be able to award this assistantship to deserving students who will continue to remind us of Zach by adding value to their fellow classmates and to the MBA program,” said Business Dean Ken Cyree.

Scott Taylor of Olive Branch, Mississippi, and Charles Vianey of Vestavia Hills, Alabama, past presidents of the MBA Alumni Board, were instrumental in establishing the memorial assistantship in honor of McClendon and his family.

“When you met Zach, you immediately knew that he was a special person,” Taylor said. “He was devoted to learning and willing to help anyone who needed it. Recipients of this assistantship will exemplify Zach's character and spirit throughout Ole Miss.”

Vianey agreed: “Zach McClendon was the best of the best, a gifted student and known to all as a servant leader and kind friend. It is fitting that this MBA Assistantship be named in his memory.”

Prior to enrolling at Ole Miss, McClendon had obtained undergraduate degrees from Williams College in Massachusetts and Mississippi College.

“He was brilliant, kind, generous and caring,” McClendon’s classmate Will Dunphey of Picayune, Mississippi, told The Daily Mississippian shortly after his friend’s death. “He always went out of his way to help others, whether it was driving to campus at 1 a.m. to help someone finish their finance homework or picking up a friend that was stranded in Memphis and in need of help.”

Recipients of the McClendon Assistantship will not only have the honor of holding an award that exemplifies the impression Zach made while in the MBA program — an academically strong student with outstanding character — but will also be an integral part of the School of Business and MBA Office, serving as a liaison to the MBA Board and working on special projects.

“We are thrilled to have this endowment honor Zach and commemorate his spirit and enthusiasm for the Ole Miss MBA program,” Cyree said. “We all miss his infectious smile and positive attitude, and in a tangible way, this endowment will continue his legacy here at Ole Miss.”

The Zach McClendon Memorial Assistantship Endowment is open to gifts from individuals and organizations. To contribute, send checks with the endowment name noted in the memo line to the University of Mississippi Foundation, 406 University Ave., Oxford, MS 38655; or visit www.umfoundation.com/makeagift. For more information, contact Tim Noss, development officer for the UM School of Business Administration, at tlnoss@olemiss.edu or 662-915-5932.