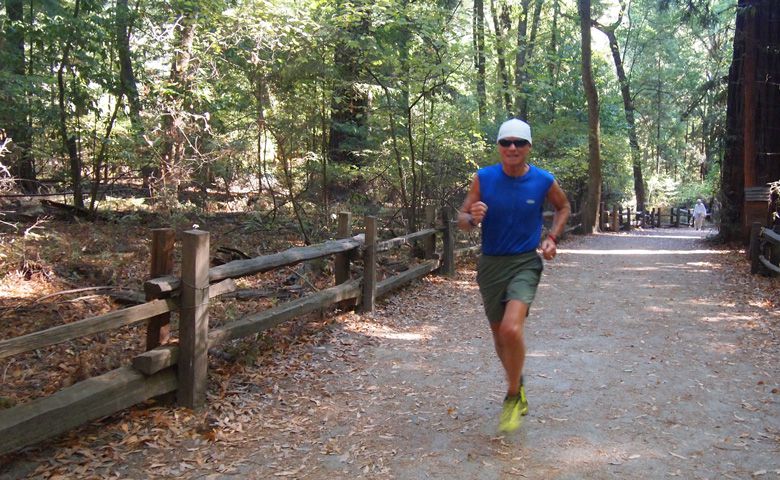 John Gee often trains for races on the dirt paths of Henry Cowell Redwood Forest in Santa Cruz, California (above). Below, Gee wins a recent race.

At 67 years old, John Gee ranks in the top 25 nationally among runners in his age group.

“I’ve got a 28-inch waist and 8 percent body fat and my resting pulse is 41 because I’m a lifetime long-distance runner,” Gee said. “I train on hills and dirt. I told everybody that running on asphalt is going to hurt them and none of them believed me. Now those guys are couch potatoes, and I’m still out beating 25-year-old kids.”

Gee has won races from 5Ks to marathons, logging over 100,000 miles since he started running. His prizes have included ribbons, medals and trophies. Now, he’s got a prize in mind for the University of Mississippi.

Gee and his wife Susan have generously agreed to donate half of their testamentary estate to the UM School of Law from which he received his juris doctorate in 1974. His unrestricted gift may be used by the school to support scholarships, faculty programs and more.

The planned gift awards Gee membership in the 1848 Society, named for the year the university welcomed its first students. The society recognizes generous donors who thoughtfully provide for the university through planned and deferred gifts.

“We are very appreciative to Mr. Gee for his generosity, which will play an important role in strengthening the School of Law and help it reach new heights of excellence,” said Chancellor Jeffrey Vitter. “It is gratifying that this gift will honor the education he received that helped shape the successes in his life and will create a lasting legacy to help others be successful too.”

Gee, who grew up in Pulaski, Ohio, received a political science degree from DePauw University in 1971. He then enrolled at Ole Miss Law School because he liked the southern climate and the tuition was affordable.

“I paid my own way through law school. I worked on the section gang on the railroad every summer and I worked a part-time job at a plywood factory in Oxford, so I paid the whole deal myself,” Gee said, adding that moving to the South came with a level of culture shock.

“That was the first year the law school had a lot of out-of-state law students,” he said. “The local guys spoke a different language, literally. I remember Robert Khayat was an associate professor at that time, teaching civil procedure. I was called on to talk about a particular case and I said Lafayette County the way it’s pronounced in the north and I got a chuckle from the class.”

Additionally, Gee remembers being the only student with long hair in his first-year class.

“They were the Rebels, but I was more of a rebel than they were,” Gee said, laughing. “So I get a kick out of Ole Miss now with recent players Dexter McCluster playing football and Stefan Moody playing basketball with their long hair.”

After earning his law degree, Gee moved to Cincinnati, where he established his own practice as a plaintiff lawyer specializing in worker’s compensation cases. There, he met Susan, a court reporter, during a deposition; she’s now president of the Ohio Court Reporters Association and owns her own court reporting business.

When the Gees aren’t working, they enjoy spending time in Capitola, California, and Boulder, Colorado.

Gee says his Ole Miss legal education gave him the foundation he needed to establish a successful career (42 years and counting) and, for that, he’s grateful: “I’m just pleased to help out Ole Miss; the university was good to me, so I wanted to try to return the favor.”

The university is likewise grateful for him.

“We are always thrilled to know that our graduates had such a great experience here that they want to give back,” said Debbie Bell, interim dean in the School of Law. “And to give back in a way that enables us to address areas of greatest need is just exceptional. We truly appreciate Mr. Gee’s very generous planned gift.”