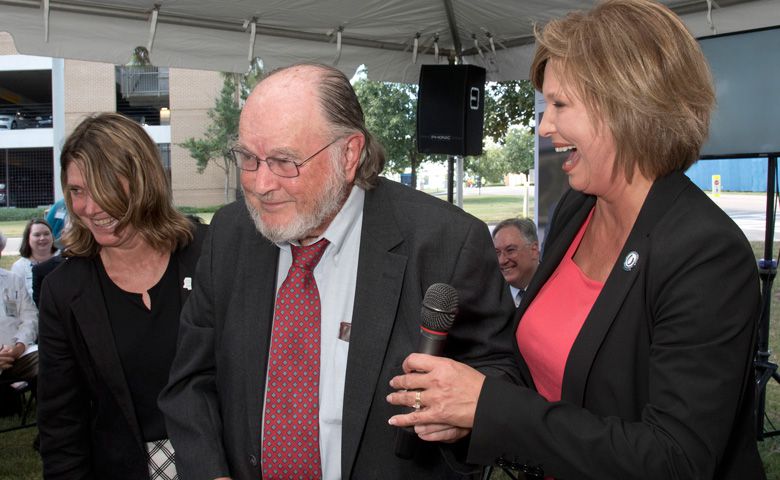 The latest chapter in Mississippi's health story has a name – The John D. Bower School of Population Health.

At a ceremony Monday, Sept. 19, university and health-care leaders celebrated the newest health science school at the University of Mississippi Medical Center.

“Population health resides at the intersection of clinical care and public health,” said Dr. Bettina Beech, dean of the school. “It is an emerging field that seeks to prevent and treat diseases by keeping people healthy and by addressing the multiple factors that impact the health of individuals and communities.”

Health includes health care – what a person receives when sick – but starts long before they enter the hospital or clinic.

Approved by the state Institutions of Higher Learning in April, the school will be the seventh represented at the Medical Center campus and only the third of its kind in the United States. Classes will start in fall 2017.

“Dr. Bower built a network of health care by providing high-quality, coordinated care with a team approach,” said Dr. Ralph Didlake, UMMC associate vice chancellor for academic affairs. “He based the system on data, metrics, best practices and patient outcomes. He was ahead of the game in terms of what population health can do as a delivery model for health care.”

At its height, Kidney Care served more than 2000 people in Mississippi, half of the state's dialysis patients. Furthermore, the dialysis program had the lowest rates morbidity and mortality in the country.

When Kidney Care merged with other dialysis programs in 1996, Bower used the proceeds from the transaction to start the Bower Foundation, which funds projects dedicated to improving the health and educational status of Mississippians.

A $5 million gift from the Foundation will help fund the school's start-up costs and prepare its home on one-and-a-half floors in UMMC's new Translational Research Center. The multidisciplinary building is on schedule for completion in summer 2017.

“Dr. Bower is an important pioneer in medicine and of the population health model before it was in fashion,” Beech said. “He has been an enormous supporter of UMMC for decades and the mission of the Foundation is extremely well-aligned with our mission in the School of Population Health.”

This gift from the Foundation is the latest in a legacy of support for programs on the University of Mississippi campuses in Oxford and Jackson. Since 1996, more than $14 million has supported education, research, health care and telemedicine, as well as starting the Center for Bioethics and Medical Humanities at UMMC.

“Dr. Bower recognizes that there is more to health care than the technical component, that ethics and professionalism are important,” said Didlake, who directs the center.

“I can't think of a more fitting name to go on this school because, like Dr. Bower himself, it will be a game changer, a paradigm breaker, a trail blazer,” said Dr. LouAnn Woodward, vice chancellor for health affairs.

“In this case our school will change the way we think about and engage the concepts of health and health care, and reach out into communities to make a lasting difference,” she said.

“The Bower Foundation is clearly one of the most thoughtful and progressive groups working to improve the prospects of one of the nation's poorest states,” Vitter said. “The addition of this new school will further enhance our medical center's goal of achieving a healthier Mississippi and the university's status as a flagship university. I look forward to great things from the Bower School of Population Health.”

Anne Travis, CEO of the Bower Foundation and Bower's daughter, called the Medical Center a “treasured medical and economic asset” for Mississippi and called the founding of the new school “a bold statement that confirms UMMC's commitment to improving health in our state.”

The school's initial degree programs will be M.S. and Ph.D. options offered by the Department of Data Science, formed from UMMC's Center for Biostatistics and Bioinformatics. The Departments of Population Health Science and Health Care Economics will open shortly after. The Department of Preventive Medicine, which will also be a part of the School of Medicine, will build a residency program.

“Our School of Population Health will tackle vexing problems such as reducing cost while increasing quality in health care, reducing health disparities in our state, and the creation and implementation of policies that will support community health,” Beech said.

“Our mission in the School of Population Health is to create and educate leaders prepared to transform health-care delivery models,” Beech said. “The long-term goal is to have a positive impact on health in the state of Mississippi.”

Beech said she is honored to be the school's first dean and recognized the wide-ranging collaboration needed to bring the school to fruition.

“This process has been a collective effort,” Beech said, “and that speaks well to the spirit of population health.”