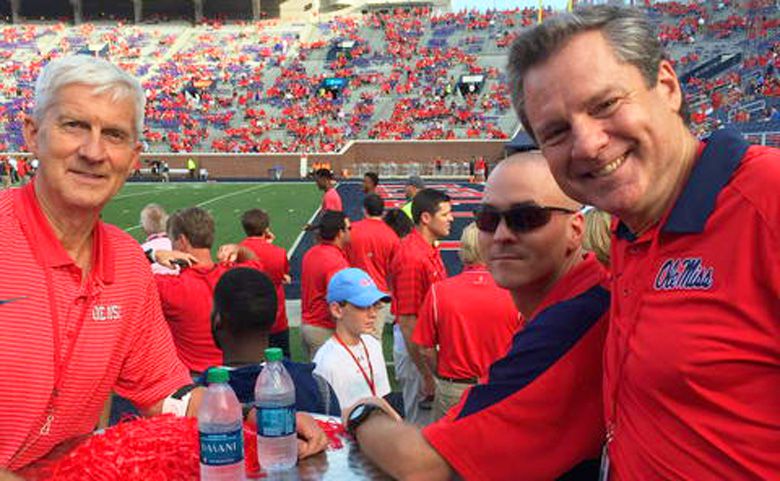 In 1978, when Tread Pearson was a senior at the University of Mississippi, his mother, Diane – a longtime professor in the Patterson School of Accountancy – became the first woman named to the Ole Miss Athletics Committee. So it’s fitting that his gift in her memory will benefit women’s athletics.

Pearson says his mother was passionate about teaching and would be pleased to know that the Diane Pearson Opportunity Endowment for Women’s Athletics will provide financial assistance to student-athletes.

“My goal is to honor and continue the work started by my mother. She was a pioneer in ensuring that women had all the tools necessary to fulfill their potential,” Pearson said. “The Diane Pearson Opportunity Fund provides a unique enhancement for Ole Miss. Monies raised from this campaign will be used to prepare female student athletes to achieve success in life.”

Additionally, the Pearson family will be honored when part of the Gillom Sports Center is named in memory of Diane Pearson upon its expected completion in March 2017.

The Pearsons have been part of the Ole Miss family for decades. Tread’s father, Thomas Sr., was a member of legendary head football coach John Vaught’s first recruiting class. Tread’s three siblings were Rebels as well. Thomas Jr. and Rodney were on the Ole Miss cross country team during their college days, while Jacklyn was a member of the marching band as a music major.

“My family owes much of its success to the life lessons we learned at Ole Miss,” Pearson said. “Our experiences there prepared us for the accomplishments with which we have been blessed and our involvement with the athletic programs gave us some of our most treasured memories.”

Pearson graduated from the university in 1978 with bachelor’s degrees in business administration as well as journalism and advertising; he earned a master’s degree in radio and television broadcasting in 1981. He then became UM’s first sports information director for women’s athletics before moving to Boston, where he lived for the past two decades.

Pearson, who recently moved back to Oxford, said his uncle Faser Triplett began the family’s tradition of giving to Ole Miss.

“It’s important to me to be able to continue providing support as much as I can,” said Pearson, whose donation to Ole Miss Athletics will enhance the student-athlete experience. The generous gift, his first toward Athletics, is one that he believes is a necessity for the future.

“It is very important for us to give back and help Ole Miss continue to provide opportunities to deserving student-athletes,” he said. “The University is preparing the future of our state and the future of our country, and we are honored to be able to help in any way.”

For more information or to contribute to the Diane Pearson Opportunity Endowment, please visit GiveToAthletics.com or contact the Ole Miss Athletics Foundation at 662-915-7159.