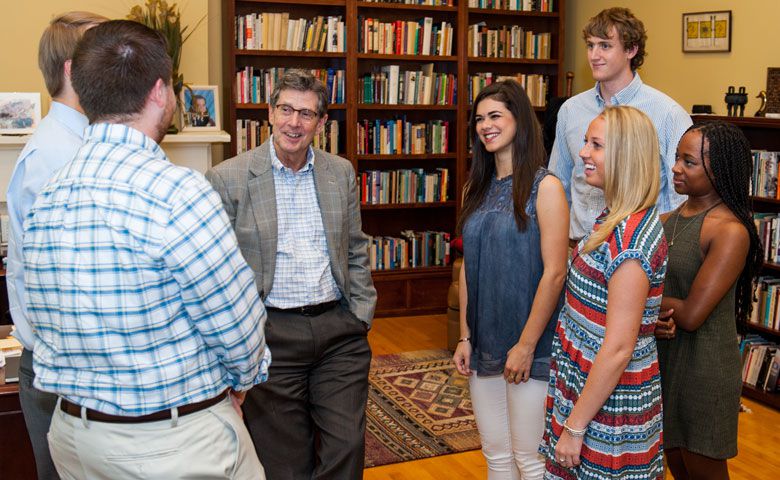 A record 276 applications have poured in from students across the nation and from several other countries vying for 70 freshman slots in the University of Mississippi's Croft Institute for International Studies, signaling the prominence the demanding program has gained as it nears its 20th anniversary.

The continuing increase in high-ability students seeking degrees from the Croft Institute is one of several reasons that prompted the Joseph C. Bancroft Charitable & Educational Fund – which has invested more than $44 million into the program – to provide a new $5 million commitment, ensuring students are equipped with knowledge and perspectives to embrace opportunities on the world stage.

The support from the Bancroft Fund – established as a nonprofit organization by the estate of Croft Metals founder Joseph C. Bancroft – will span the next five years, with the university matching the gift dollar to dollar. The Bancroft Fund agreement also stipulates the prospect of another $5 million in support being granted at the end of that period.

"We are pleased that the Bancroft Fund has the ability to provide this financial support to the university, and we continue to be impressed with the amazing achievements of Croft students," said Tom A. Abdalla of McComb, chairman of the Croft Institute's board of trustees. "Provost Morris Stocks' interactions and work with our trustees ultimately led to this new commitment.

"To witness the manner in which the university has grown over the last few years has been really incredible, and we believe the Croft Institute for International Studies has played a pivotal role in attracting students and strengthening the university's academic reputation."

Looking to this fall's incoming freshmen, the Croft Institute will enroll its largest cohort to date, with students' average overall ACT increasing to 31.2. Forty-five percent will be Mississippians and 55 percent are from 20 different states, Australia and Japan. Besides the institute's faculty, staff and alumni being heavily involved in student recruitment, Croft Ambassadors meet with prospective students, take them on campus tours and write letters urging them to choose the international studies program.

While thanking Bancroft Fund board members for their support, UM Chancellor Jeffrey Vitter notes how crucial it is to prepare graduates to understand the relationships between politics, economics and culture at the international level.

"We have an important mission at the University of Mississippi to advance international understanding and appreciation as a key component of our learning environment," Vitter said. "We are deeply grateful for the Bancroft Fund's continued commitment to expanding exceptional educational opportunities that ultimately have a powerful impact on our state and nation.

"Croft Institute alumni and current students are proving their mettle, making tremendous contributions in an array of fields. This exceptional program has strengthened the global presence and outreach of our university, which, in turn, benefits all of our students."

Kees Gispen, the institute's executive director and a professor emeritus of modern European history, agrees with that assessment.

"The Croft Institute, together with the Sally McDonnell Barksdale Honors College, the Chinese Flagship Program, Lott Leadership Institute and other strong programs, have served as a catalyst to transform the university's culture, bringing strong, diverse student scholars to our campus," said Gispen, who has led the institute since 2007 and is retiring this summer.

"There is a heightened recognition nationally that the University of Mississippi is a serious academic institution."

Overall Croft enrollment is limited to ensure classes are small, fostering discussion and analysis, and the program helps keep some of the best and brightest students in Mississippi.

Alex Martin, a junior from Madison, said she was attracted to the program's "academic excellence and firm commitment to language acquisition and significant study abroad experiences."

"The Croft Institute helped me go to Morocco for a semester to study Arabic and French, one of the most rewarding experiences of my life," Martin said. "Croft has encouraged and guided my interdisciplinary studies in fields such as mathematics and economics. None of the Croft faculty or advisers ever wavered or doubted me when I said I also wanted to obtain a B.S. in mathematics and complete extensive coursework in economics; they just said, 'Let's figure it out.'

"After graduation, I intend to complete doctoral studies in economics. Already, my Croft advisers have put me in touch with several outstanding alumni who have helped to make me the most competitive and knowledgeable applicant possible when I begin the process in the fall."

Croft freshman Jarvis Benson, of Grenada, is pursuing a major in Spanish.

"What I found different and unique about the Croft Institute was the emphasis the program puts on not only just learning the foreign language you choose but also being totally immersed in classes on the history, politics and social culture that comes with it. I came into college knowing that I wanted to learn the Spanish language, and Croft has given me that opportunity and so much more.

"One of the greatest experiences I've had here at the university has been the Croft retreat that the faculty provided for incoming Croft students at the beginning of the academic year. It was so amazing to be surrounded by such wonderful, intelligent and thoughtful global thinkers."

"Focusing on international studies was the furthest thing from my imagination when I first talked with university leadership 19 years ago about the Bancroft Fund supporting a new program," said Gerald M. Abdalla of McComb, CEO and president of Croft LLC and a Bancroft Fund director instrumental in establishing the institute.

"The university made a case for international studies, and we decided to support that idea. We only have to look at the strength of the faculty and the credentials of the alumni and students to know that we made the right decision."

Croft scholars select East Asia, Europe, Latin America or the Middle East as areas of regional concentration. Many who choose East Asia enjoy a close association with UM's Chinese Flagship Program, and all students in the institute select a global theme to emphasize. Many Croft students receive top scholarships at the university.