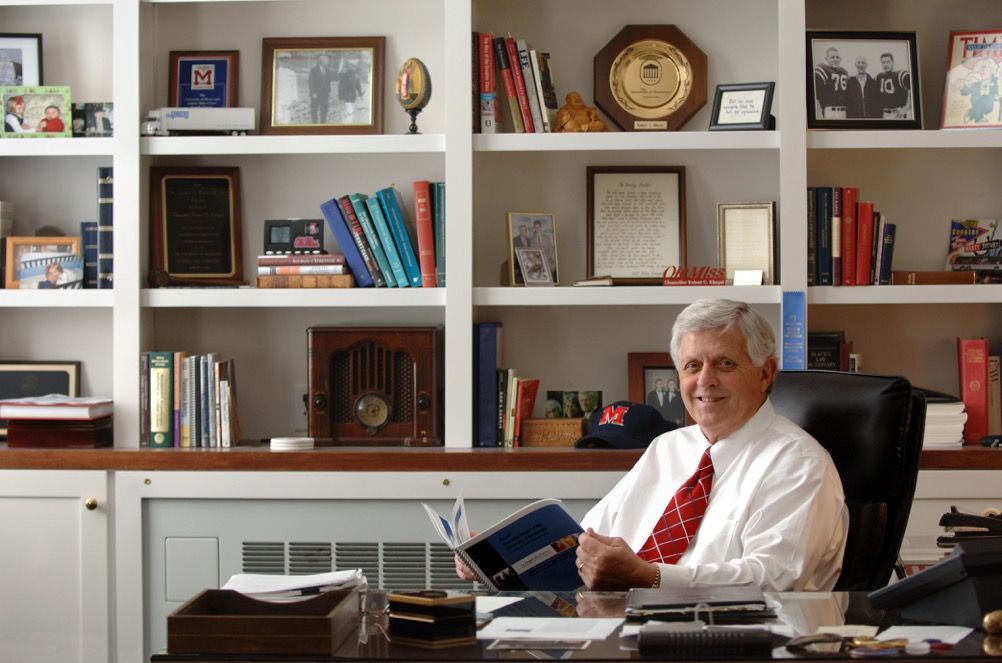 The Ole Miss Women’s Council for Philanthropy will honor University of Mississippi Chancellor Emeritus Robert C. Khayat with its Legacy Award for 2016.

C Spire, a diversified telecommunications and technology services company and the nation’s largest privately held wireless provider, is the presenting sponsor for the event, which will be held April 16 in the Olivia and Archie Manning Athletics Performance Center.

“The OMWC is extremely grateful to C Spire for its tremendous support of the Legacy Award,” said OMWC chair Karen Moore, of Nashville, Tennessee. “C Spire has been the presenting sponsor since the inception of this important recognition program that honors individuals who epitomize leadership, mentoring and philanthropy, the flagship components of our program.”

The evening will feature a program of entertainment and tributes produced by singer-actress and OMWC member Mary Donnelly Haskell. A gala reception at 6 p.m. will be followed at 7 by dinner, planned and prepared by Chef Joel Miller of the Ravine, an Oxford restaurant known for featuring local purveyors on its menu.

Olivia and Archie Manning, often referred to as the “First Family of Football,” will emcee the evening.

“With such an incredible evening planned to honor Dr. Khayat, I would encourage everyone to make arrangements to attend,” said OMWC member and Legacy Award chair Mary Susan Gallien Clinton. “This will be a fitting tribute to a leader who has made such a dramatic impact on our university and beyond and stands as such a tremendous role model to our scholars.”

Khayat, UM chancellor from 1995 to 2009 and leader of what has been aptly described as a “renaissance at Ole Miss,” helped found an honors college and institutes of international studies, leadership and racial reconciliation. He secured a coveted Phi Beta Kappa chapter, attracted millions in private support and hosted the 2008 presidential debate. He transformed the campus through renovation, landscaping and new construction, including a chapel, a performing arts center and an indoor athletics practice facility. Under Khayat’s leadership, student enrollment increased by 43.6 percent and the university’s budget grew from $500 million to $1.5 billion annually.

“We’re devoting extraordinary efforts to make this a truly exceptional evening, as the OMWC celebrates Dr. Khayat’s outstanding legacy,” Clinton said. “Don’t miss being a part of this memorable event, which will not only honor our chancellor emeritus, but will benefit the young men and women on OMWC scholarships. All proceeds will help fund our leadership, mentoring and other special programs for OMWC Scholars.”

Khayat joins a prestigious list of Legacy Award recipients, including Charles Overby, former CEO of the Freedom Forum and the Newseum; Donna and Jim Barksdale; philanthropists, mentors and education champions; Gov. William and Elise Winter, inspiring leaders, community builders and visionaries for Mississippi; Olivia Manning, co-founder with husband Archie of the Manning Fund for a Healthier Mississippi at the UM Medical Center, philanthropist, and mother and mentor to three exceptional sons, Cooper, Peyton and Eli; and Leigh Ann Tuohy, an interior designer, mentor, inspirational speaker and mom of three, whose family was the subject of the book and movie “The Blind Side.”

“Honoring Dr. Khayat in this way is especially meaningful to the council,” said Jan Farrington, a past chair of OMWC. “He was chancellor when the OMWC was founded and without his help and leadership, we would not have had the successful 15 years that we have experienced.

“He immediately understood the vision of what could be accomplished with this program and he supported us in every way possible. He has the profound gratitude of the council and we gratefully honor him with this award.”

Established in 2000, by a group of female leaders and philanthropists, the OMWC scholarships have grown to be among the largest and most prestigious on campus at $32,000 each. The scholarships are awarded each year to young women and men based on academic records, leadership, financial need and a desire to give back to society. When scholars become established in their careers, they are also encouraged to give back to the program.

Sixty OMWC scholarships have been created by diverse donors who name them for themselves or for other people who have been influential in their lives. Each new scholarship is acknowledged in a ceremony in the council’s Rose Garden where the sculpture “The Mentor” stands as its centerpiece.

The Rose Society is an annual giving program established in 2010 for individuals to support programming for OMWC scholars. Annual membership requires a $1,000 tax-deductible contribution.

Members are invited to all OMWC events and are recognized in council communications and at the Legacy Award event. Rose Society membership dues go directly to programs that include two opportunities for each scholar to travel during his/her college career.

All Legacy Award event sponsors and Rose Society members will enjoy a Friday evening Songwriters Soiree at the Lyric on the Oxford Square, hosted by the Kite Foundation.

For information concerning the Legacy Award sponsorships or for Rose Society membership questions, contact Nora Capwell at 662-915-2384 or ncapwell@olemiss.edu. To purchase tickets to the event, contact Christine Wallace in the University and Public Events Office at 662-915-5203 or cswallac@olemiss.edu.