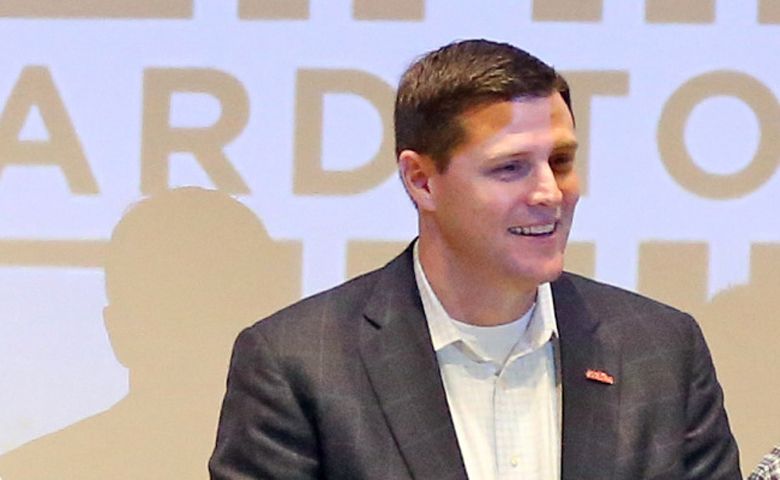 The University of Mississippi's Keith Carter has received the 2016 Fundraiser of the Year Award from the National Association of Athletic Development Directors (NAADD).

"Keith Carter has been a mainstay in our athletics program from his time as a student-athlete and now the leader of the Ole Miss Athletics Foundation," said Ole Miss Director of Athletics Ross Bjork. "The NAADD award highlights his great leadership and showcases that we are doing great things here in Oxford. Keith has led, without question, the most fruitful and impactful years the Ole Miss Athletics department has ever experienced. Any way that meaningful growth can be measured, Keith has shattered those expectations."

Carter, who serves as Ole Miss' Senior Associate Athletics Director/Executive Director of the Ole Miss Athletics Foundation, was named the University Division winner, while University of Indianapolis Senior Associate Athletics Director for Athletic Development Matt Donovan was named the College Division winner. Both Carter and Donovan will be honored Tuesday, June 14 at the Learfield Directors' Cup Luncheon, held in conjunction with NACDA's 51st annual Convention at the Hilton Anatole Hotel in Dallas, Texas.

"On behalf of NAADD, I want to congratulate Keith and Matt on being named this year's NAADD Fundraisers of the Year and for all of their impressive contributions to the industry," stated NAADD 1st Vice President Scarlett Schneider Ph.D., executive director of athletics development at the University of Pennsylvania. "We are very excited to recognize their accomplishments at the upcoming NAADD Convention in June."

In that time, the Ole Miss Athletics Foundation has experienced unprecedented growth. The Forward Together campaign, the most aggressive and comprehensive fundraising initiative in Ole Miss Athletics history, reached the $75 million mark in August 2012, halfway to its goal in just one year. Since then, the campaign has eclipsed the $150 million goal with $162 million currently.

Carter has worked tirelessly with executive level staff to build the vision for facility growth throughout the Forward Together campaign. These plans include the $95 million basketball pavilion which opened its doors on Jan. 7, 2016, as well as another $127 million in capital projects affecting all 18 sports at Ole Miss.

Additionally, Carter serves with the Ole Miss Radio Network as the color analyst for Rebel basketball games. A four-year starter at Ole Miss, Carter helped the Rebels to a pair of Southeastern Conference Western Division titles in 1997 and 1998 and earned All-America honors after his senior season in 1999. He played professional basketball in Italy from 2001-08.

For more information on supporting the Forward Together campaign, contact Carter at 662-915-6684 or jkcarter@olemiss.edu.