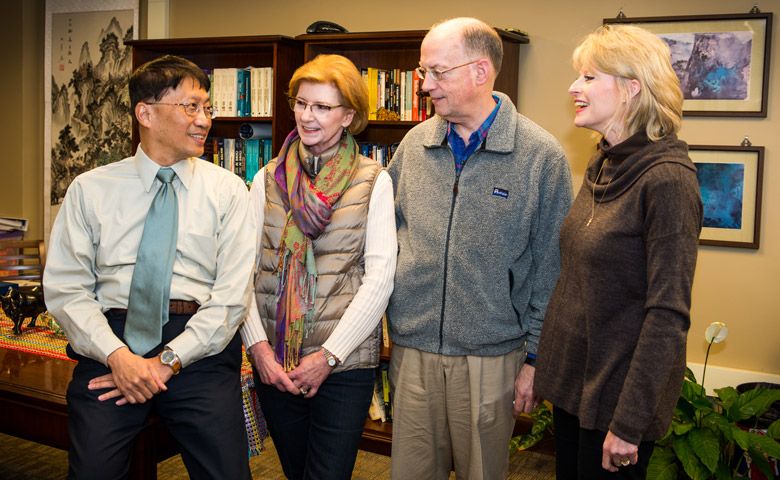 Otho Johnson was a University of Mississippi varsity cheerleader.

“The enthusiasm with which he cheered for the Rebels carried over to his support for our children all the way through their school years and beyond,” said Earl Fyke of his wife Nancy Johnson Fyke’s father.

Now, even in death, Otho Johnson continues to cheer for the University, having established a scholarship that he hoped would encourage students to remain in Mississippi to earn their undergraduate degrees.

The Otho Johnson Engineering Scholarship Endowment, funded by the Dorothy Day Johnson Living Trust, will provide financial assistance to full-time undergraduate students pursuing a degree in the School of Engineering.

“My father was an ardent Ole Miss supporter. Both he and my mother (Dorothy ‘Dot’ Day Johnson) went to school here,” Nancy Fyke said. “My father was in the entering class of 1941, so the war interrupted his education. He was in civil engineering when he started, and he came back after the war to complete his degree.

“In his will, he designated three places to receive charitable donations. The School of Engineering was one of those along with Reformed Theological Seminary and First Presbyterian Church in Jackson.”

The Fykes said the gift is a natural extension of Otho Johnson’s personality.

“I think he wanted to establish the scholarship as an encouragement for students to go into engineering, which he always felt provided a solid foundation for his own career; and he wanted to do something special for Ole Miss and specifically for the Engineering School,” Nancy Fyke said. “We know from experience with our own children’s classes that a lot of talented students leave the state. Scholarships as well as the Honors College were powerful encouragements for our children to come to the University of Mississippi instead of accepting appointments out of state. So perhaps that was one reason … that, and again, just his love for Ole Miss.”

First preference for the award will be given to students participating in the Belhaven University 2+2 or 2+3 program, honoring Dot Johnson, who attended Belhaven before transferring to the University of Mississippi after her freshman year. The partnership between Belhaven and the UM School of Engineering was established in 2015 as an incentive for students who want to attend both universities. Students in the 2+2 or 2+3 program complete core classes in two years at Belhaven and then finish their degree at the University, which specializes in the course of study they want to pursue. Students will earn two degrees, one in the original discipline at Belhaven, and one in engineering at Ole Miss.

“We expect this partnership to ultimately be a win-win strategy,” said Kevin Gardner, development officer for the UM School of Engineering. “It affords Belhaven students the opportunity to receive financial assistance while also keeping them in-state to receive their degrees, which is good for Ole Miss.”

Secondary preference for the Otho Johnson Engineering Scholarship will go to students from Jackson Preparatory School who want to major in engineering.

“That relationship seemed natural as all of our children attended Prep,” said Earl Fyke, a Jackson, Mississippi, cardiologist and UM engineering graduate. He and Nancy, who also graduated from Ole Miss with bachelor’s and master’s degrees in home economics, have three children, all of whom attended UM. “Otho was probably their greatest fan and greatest cheerleader going through school and rarely missed any of their activities at Jackson Prep. The thinking was that because this is a very good preparatory school, many of those kids have opportunities to study out of state. We would love to encourage them to come here, as did Otho.”

“Mr. Johnson had the foresight to provide significant support for students in a way that will encourage more students to choose the University of Mississippi for their engineering degree. For that, we are very grateful,” Cheng said.

Born in Jackson, Johnson attended the Jackson Public Schools and was a member of the Central High School Class of 1941. During World War II, he served as a pilot with the Eighth Air Force flying B-24 bombers in combat over Germany. Following the war he graduated in engineering from Ole Miss, where he was a member of Sigma Alpha Epsilon fraternity.

After graduate study in ceramic engineering at the University of Illinois, Johnson returned briefly to Jackson, joining his father as a ceramics engineer at the Johnson-Cone Brick Company. He married Dot Day of Inverness, Mississippi, on Sept. 10, 1947, and moved his family in 1949 to the Starkville, Mississippi, area where he managed four counties for the Southern Bell Telephone Company.

“Otho was one of those people who would want neither credit nor accolades for any of this. He was such an unselfish people person. Everybody loved him, and everybody trusted him,” Earl Fyke said.

“Throughout his life, he was very much a promoter of Ole Miss,” Nancy Fyke added, recalling the many times her father brought her and her siblings, Dr. Camille Johnson Jeffcoat and David Otho Johnson, to Oxford for ball games. Both Jeffcoat and Johnson also attended Ole Miss. “We grew up in a family where we always knew Ole Miss was our school.”

Individuals and organizations may make gifts to the Otho Johnson Engineering Scholarship Endowment by mailing a check with the designation noted in the memo line to the University of Mississippi Foundation, 406 University Ave., Oxford, Miss. 38655; visiting www.umfoundation.com/makeagift or contacting Kevin Gardner, development officer, at 662-915-7601 or kevin@olemiss.edu.