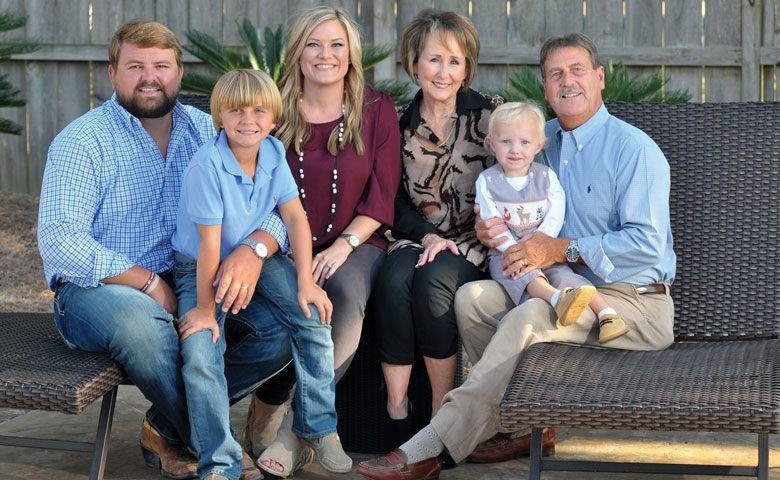 Rallying around Nolan Williams (second from right) are his family: parents Brent and Ashley Williams of Doddsville holding big brother Hudson; and Brenda and Mike Dean of Cleveland.

In his short life, 2-year-old Nolan Williams has withstood four costly open-heart surgeries and multiple heart catheterizations – with just one of the surgeries producing a $196,000 bill.

Today, Nolan is a spunky toddler who can count to 15 and leaves his parents, Ashley and Brent Williams of Doddsville in Sunflower County, marveling at how smart he is. They’re thankful that the nearby Cleveland community rallied around them, raising money to pay what insurance didn’t cover on Nolan’s life-saving procedures.

That help came from friends, family and even folks they don’t even know during Nolan’s continuing care from the pediatric heart team at the University of Mississippi Medical Center’s Batson Children’s Hospital.

“You just don’t realize how much it costs,” said Ashley Williams, an emergency room nurse in Ruleville. “You’ll pay anything for your child. I can’t imagine people going through that who don’t have anyone there for them.”

Thanks to the philanthropy of Ashley Williams’ aunt and uncle, Mike and Brenda Dean of Cleveland, parents of Batson heart patients residing in Bolivar and Sunflower counties can get assistance with such medical bills. The Deans have established an endowment fund with a gift of $25,000 through the University of Mississippi Foundation.

Dubbed “Nolan’s Neighbors,” the endowment will be used solely to help pay off balances due on inpatient and outpatient cardiac charges at Batson for children from the two counties. Anyone can make tax-deductible gifts to the fund.

Brenda Dean is the sister of Ashley Williams’ mother. “Mike and Brenda wanted to do something for us, and we together came to the conclusion that we wanted to do something that would help other people,” Williams said. “It’s such a blessing to help someone else after you’ve been helped along the way. Cleveland is a small community. People come together to help.

“There are single mothers dealing with this, and heart defects in children are more common than you’d think.”

“We are a very close-knit family. Our kids grew up together, and we all live in the same town,” Mike Dean said. “Little Nolan has spent a lot of time at Batson, and we were just so impressed with the care and the entire facility. We felt like we needed to do something that would help other folks who aren’t as fortunate as Ashley.”’

Even before his birth, Williams said, Nolan was diagnosed with transposition of the great arteries. Those two main arteries going out of his heart were switched in position, or transposed. That causes too little oxygen in the blood that’s pumped from the heart to the rest of his body.

After Nolan was born, Williams said, Batson’s cardiac team diagnosed him with a hypoplastic left ventricle, yet another condition that seriously impairs the pumping of blood to the body. That complex heart defect leaves the left side of his heart critically underdeveloped.

It was a frightening experience for the family that includes Nolan’s older brother, Hudson, who’s now 8, Williams said. During Nolan’s second surgery, she said, surgeons were faced with an unforeseen complication that required them to go a different route than planned.

After that complicated surgery, Williams said, Nolan didn’t bounce back as they’d hoped. Less than a month later, they returned to Batson “and he was admitted that day. We found out then that he also had pulmonary hypertension. It was a scary time. We stayed in the PICU for another week, then had emergency surgery.”

That surgery, Williams said, brought up Nolan’s oxygen levels “and then he did fine. We were worried that the period of low oxygenation would hurt him developmentally, but it didn’t at all.” Next summer, she said, Nolan will have one more surgery that will complete his latest procedure.

He and Brenda were especially led to help children born with heart problems, “especially in this poverty-stricken area,” said Dean, a retired accountant. “My wife and I felt like we’d do something outside the church that would have an impact on children.”

The couple hopes that others will donate to the fund in honor of, or in memory of, a child who has coped with heart disease. “We want this fund to grow on people,” Dean said.

Nolan turned 2 in July. “You would never, ever, ever know that anything had ever happened to him,” Ashley Williams said. “His color is perfect. He is loud. He is so smart. He says things that shock everyone. And for the longest time he was bald, but this summer, he grew long, white, curly hair. He’s a cotton top.”

He’s too young to understand the generosity of his aunt and uncle. Ashley Williams plans to explain to him, as soon as he can take it in, what Nolan’s Neighbors is doing for other kids like him.

“This will be so special to Nolan – to know that forever, he will be helping people in his honor,” Williams said. “The older he gets, the more it will mean to him. And I hope we can interact with the people that we are getting to help, especially because they’ll be from Sunflower and Bolivar counties.”

“We were thrilled when Mr. Dean approached us about a gift for pediatric cardiology. When our gift officer sat down with him and Mrs. Dean later, a much richer story emerged,” said Travis Bradburn, UMMC interim executive director of Development and Alumni Affairs. “They had been so moved by Nolan’s journey that they wanted to do something for children like him from their home counties. Their support for children in Sunflower and Bolivar counties will change lives.

“What a great example of how one grateful family can help us do more for children and families in Mississippi.”

For more information on supporting programs at UMMC, contact Travis Bradburn at 601-984-2107 or tbradburn@umc.edu.