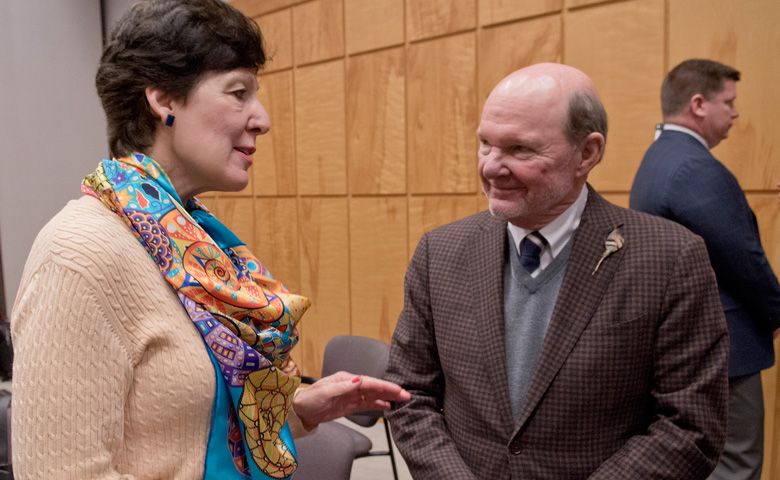 Dr. Renate Savich, chief of the Division of Newborn Medicine at UMMC, thanks Sanderson Farms CEO and board chairman Joe F. Sanderson Jr. for his company's support of Friends of Children's Hospital.

Ten years from now, more children will be playing with their friends, going to school and just being kids, not battling life-threatening diseases and health problems. That’s the vision of a commitment to help that’s stretching past a decade in Mississippi.

Sanderson Farms has made a 10-year commitment to being the title sponsor of the Sanderson Farms Championship, an annual charity golf tournament. The Laurel, Miss.-based, Fortune 1000 food corporation has sponsored the state’s only PGA TOUR event since 2013, but recently renewed its commitment to the tournament through 2026.

“It was time for us to contemplate the future and what kind of commitment we were going to make going forward,” said Joe Sanderson Jr., CEO and board chairman, at the recent announcement. “We believe that it is important, particularly for the charities and for (Batson) Children’s Hospital to know that we’re going to be here for that period of time, for the Jackson metro area and the state of Mississippi to know that they can depend on us.”

The event, which debuted on the PGA TOUR as the Magnolia State Classic in 1968, raises funds for Century Club Charities, the host organization, which made a $1.109 million donation to Friends of Children’s Hospital from the 2015 tournament. This topped its 2014 tournament gift of $1.102 million.

This year’s gift is earmarked for improvements to the neonatal intensive care unit (NICU) at the University of Mississippi Medical Center.

Dr. Renate Savich, professor of pediatrics and chief of the Division of Newborn Medicine at UMMC, knows firsthand the impact this donation will have on the state’s smallest and most vulnerable patients.

“Our NICU takes care of almost 1,000 tiny and very sick babies each year, and it is only with the help of the community and people like the Sanderson Farms family that we are able to have the latest equipment at UMMC so we can do what we need to do to save lives and heal these babies.”

Last year’s record-setting donation came as Friends of Children’s Hospital was raising $2 million in 2013 and 2014 to help build a pediatric heart center at Batson as part of the hospital expansion. The Children’s Heart Center currently occupies space at Batson, but is in dire need of more and better-equipped quarters since the congenital heart program was rebuilt in 2009. More than 1,000 babies and children each year receive treatment at the Children’s Heart Center.

“The 10-year commitment by Sanderson Farms to sponsor the Sanderson Farms Championship PGA TOUR event will provide substantial funding to help Friends pursue our mission,” said Sara Ray, board president of Friends of Children’s Hospital. “The stability of this funding along with other ongoing annual fundraising efforts means Friends can focus on a long-term plan to meet the needs of Batson Children’s Hospital.”

Most sponsorship commitments are three years or less, said Peter Marks, president of Century Club Charities. “This allows us to plan long-term. Essentially this is one of the longest-running commitments on the PGA TOUR.”

Each year, the Sanderson Farms Championship produces an economic impact in the range of $30 million for the state, said Steve Jent, tournament director.

With Sanderson Farms’ 10-year sponsorship agreement, he expects that figure to rise.

“This kind of commitment is unprecedented for our event,” Jent said. “It provides us the kind of stability to know that we don’t have to wonder who our title sponsor will be. It gives us stability and peace of mind through 2026.”

Having a firm decade-long title sponsorship agreement speaks to the commitment of Sanderson Farms leadership to not only the tournament but to Mississippi and the health of its children.

“This is a 10-year commitment to improving the health and health care of the children of Mississippi,” said Guy Giesecke, CEO of Children’s of Mississippi, an umbrella organization that includes all pediatric care at the University of Mississippi Medical Center including Batson Children’s Hospital. “The state is very fortunate to have someone who cares as much as Joe Sanderson, and our hospital will benefit tremendously.”

“So think about the next 10 years,” said Jeff Hubbard, board secretary of Century Club Charities, at the announcement of the commitment. “I think my first thought was, ‘We’re going to have a golf tournament for 10 years. My second thought was, ‘Children who are not yet born and won’t be for a number of years will be impacted by this decision.’”

“It is the sick and injured children of Mississippi who are the real winners of the Sanderson Farms Championship for the next 10 years,” said Ray. “All of us at Friends are so thankful to Kathy and Joe Sanderson and the board of directors of Sanderson Farms for their long-term commitment to ensure improved health and a better quality of life for our Batson patients.”

Said Jent: “For Joe Sanderson and his team to care so much about this tournament, Mississippi and its children says a whole lot about what Sanderson Farms is all about.”