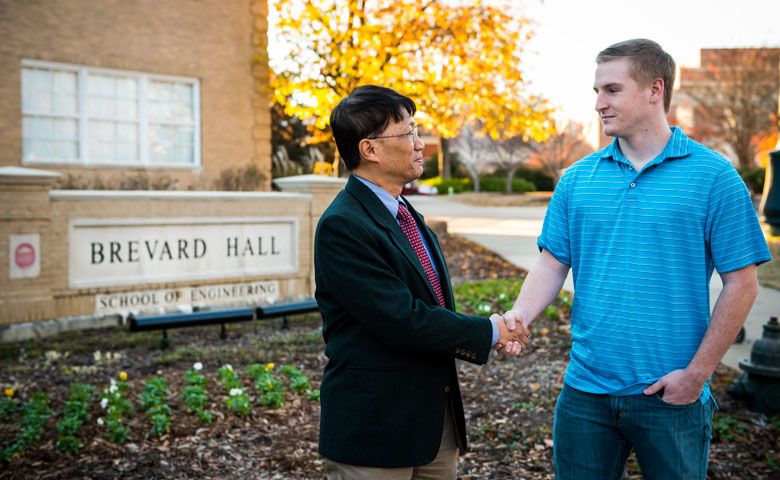 When University of Mississippi freshman Tyler Donovan called to tell his mother he had been named the 2015 recipient of the Joey Embry Memorial Scholarship, she became so emotional that she had to hang up, regain her composure and call him back.

“There are a lot of scholarships that are named after people, but when you actually know the person, it really makes an impact,” said Alison Tyler of Bruce, Miss. She grew up with Embry, the Rebels’ promising 6-foot-6, 315-pound offensive tackle who tragically drowned in 1998.

“I’ve got pictures of us hanging out on the playground in junior high. Growing up in Bruce … it’s such a small town, you know everybody in your class and Joey was just a big teddy bear,” she said. “He was always smiling. He liked to have fun and was a friend to everybody. He was just a person that everybody could like.”

She vividly remembers those good times and likewise the shock she felt when Joey died – memories that resurfaced when Donovan called with his news.

“It just really meant a lot because I grew up with Joey and here my son wins the scholarship,” Alison Tyler said. “So I thought it was a huge honor for him.”

Donovan, like Embry, played football for Bruce High School and is now pursuing a degree in electrical engineering with an emphasis in computer science. In high school, Donovan maintained a 4.0 grade-point average and graduated fifth in his class. During his senior year, he developed a keen interest in computers. In fact, his programming skills were instrumental in helping his Engineering to Robotics team advance to the world championships – the self-proclaimed highlight of his high school career.

“I’m very proud to be selected,” said Donovan, adding that he too has a connection with Joey Embry. “One of my best friend’s aunt is his first cousin and I was over at their house all the time growing up.”

Donovan said the scholarship will help with expenses, which is good because his course load leaves him little time for extracurricular activities, much less a job. Next semester, for example, his courses include programming, digital systems, calculus, writing, chemistry and labs for three of the classes.

At the time of Embry's death, many donations were given to Ole Miss in his memory. Two years later, his parents, Gwen and Bill Embry, worked with the University Foundation to help create the "Joey Embry Scholarship" to honor the memory of their son. Through recipients like Donovan, Embry’s legacy lives on at the university he loved. And when there’s a connection between the scholarship recipient and Joey, the Embrys say it’s even more meaningful.

“We are proud to have Tyler receive the scholarship this year,” Gwen Embry said. “We know his mother, Alison, and we knew she and Joey were friends. We also know a lot of her family.

“Joey gave everything for there to be this scholarship and we want to make sure it’s used to the best of its ability – that the students will devote their time and efforts to school and keep their priorities in the right direction,” Gwen Embry said.

Donovan knows he has received a gift that is worth far more than the money he will receive and he is committed to honor it.

“I just want to be one of those people who really deserves their degree,” he said. “Classes are a lot harder here than in high school, so that’s a huge change. My time management has had to improve and I’ve had to put a lot more time into studying. But Ole Miss is a great atmosphere with really nice people.”

Since the Embrys have lived in Calhoun County and reside in Yalobusha County, they offer the scholarship in each geographical area. Students interested in applying for the scholarship should talk with their respective high school guidance counselors.

Individuals and organizations can contribute to the Joey Embry Memorial Scholarship Fund through the University of Mississippi Foundation, 406 University Ave., Oxford, Miss.; phone 800-340-9542; or online at http://www.umfoundation.com/makeagift.