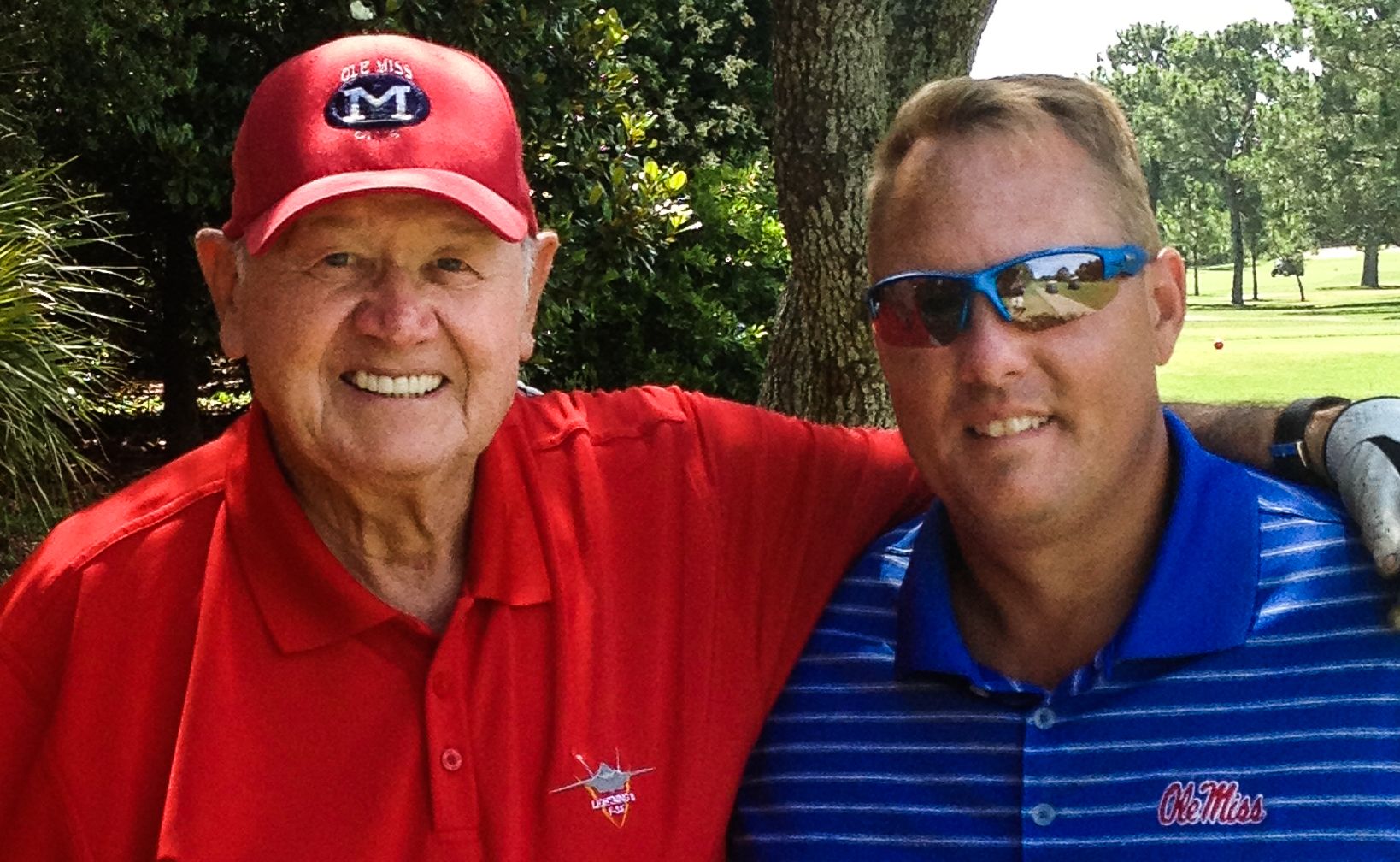 Doc Hollingsworth enjoys a round of golf with one of his newest buddies from Ole Miss Athletics, Coach Hugh Freeze.

The entire population of Centreville, Dr. Gerald "Doc" Hollingsworth's hometown, could fit in just one section of Vaught-Hemingway Stadium/Hollingsworth Field.

When he left Centreville for the University of Mississippi in 1949, the average U.S. household income was about $3,200 a year. His father, who had a second-grade education, was a laborer with the Mississippi Department of Transportation and also farmed and worked various jobs to make ends meet. Meanwhile, his devoted mother, whom Hollingsworth describes as "a great lady, the sweetest woman I've ever known," encouraged and supported the family in their home.

"We were poor but everyone else was, too," said Hollingsworth, now of Niceville, Florida, who recently contributed the equivalent of $25 million to Ole Miss athletics. Of the donation, $10 million is a cash gift to be used through the Forward Together campaign; the remainder is in the form of a charitable remainder trust that will establish the Gerald M. Hollingsworth, M.D., Athletic Scholarship Endowment.

A portion of Hollingsworth's donation, which is the single largest gift not only to the campaign but to Ole Miss athletics as a whole, will be used to support the north end zone expansion of Vaught-Hemingway Stadium, where the playing field already bears his name.

In 1998, at a crucial phase in plans to attract private funds for a $13 million football stadium expansion, the Fort Walton Beach, Florida-based surgeon and entrepreneur stepped forward with a gift of $3 million, which brought his contributions to more than $5 million at the time and gave him naming rights to the gridiron.

"Transformational is the only adequate word I can summon when I think about Dr. Hollingsworth and the impact he has had on our entire university, " said Ross Bjork, Ole Miss athletics director. "'Doc' continues to give to academic and athletic programs of the university, and his impact will be felt for eternity. "Everyone who experiences Ole Miss as an alumnus, fan, coach, faculty, staff, student and student-athlete will see the difference his contributions have made to our beloved athletics program and university."

Hollingsworth is most proud that his gift will be used to provide scholarships for student-athletes who may not otherwise be able to afford UM tuition.

"I hope it will motivate and stimulate other people to donate to the university because I think it's a great school and the money will be put to good use to provide scholarship aid to students who would not be able to attend the university otherwise, as well as provide for needs they might have," he said. "I'm just hoping that young people will have the great experience and the great benefit I derived from going to Ole Miss."

In a way, Hollingsworth is encouraging others to attend the university, just as he was encouraged by his family doctor and role model, Dr. Earl Fyke. "He took me under his wing and convinced me I could go to Ole Miss with his help and could get a good education there and have a great experience, and he was certainly right."

Hollingsworth received a bachelor's degree in chemical engineering from UM in 1953 and then attended two years of medical school at the university before completing his medical degree at Harvard University.

Hollingsworth said he vividly remembers the day he graduated from Ole Miss: "My family, my mother and father, came to see me graduate from chemical engineering. I was the first member of the family that ever finished college, so I know it made them proud."

But Hollingsworth cherishes a particular day of his college career over all the others.

"My very favorite memory was watching Coach Johnny Vaught's Rebels whip Maryland in the football game in 1953 and then celebrating with my classmates after that victory," Hollingsworth said. "We stormed the field. There've been just a lot of great memories and most have been associated with football games."

"They're just some great names I've grown to admire over the years, and I'm fortunate enough to have known all those people and be friends with them," Hollingsworth said, adding to his list Bjork, Hugh Freeze and basketball standout Keith Carter, senior associate athletics director for development and executive director of the Ole Miss Athletics Foundation. "They always treated me like a member of the Ole Miss family and I'll certainly always be grateful for that."

Carter said becoming acquainted with Hollingsworth has been a pleasure.

"Doc is one of the most genuine, humble and caring individuals I know," he said. "He has a real desire to see our student-athletes succeed and his spirit of giving unconditionally toward that goal is one we should all strive for."

After graduating from Harvard Medical School, Hollingsworth completed his surgical residency at Duval Hospital in Jacksonville, Florida. From 1957 to 1959, he was a U.S. Navy flight surgeon and then started his private medical practice in 1959 in Fort Walton Beach.

He was the team doctor for Choctawhatchee and Fort Walton Beach high schools for almost 35 years and helped found the All-Sports Association of Northwest Florida, which honored him with its Community Service Award for helping youngsters in athletics.

The Ole Miss chapter of the National Football Foundation and Hall of Fame honored the physician with the Amateur Football Award for contributions to the collegiate athletic world.

"He is one of our most outstanding and most generous graduates," said Don Frugé, chair of the Ole Miss Athletics Foundation. "The fact that he has given so much to this university, as well as to the young people of his own community, speaks volumes about his kind, loving and generous spirit."

"I'm fortunate to have this money available and it just seemed like a need the university had," said Hollingsworth of his decision to give to the Forward Together campaign. "I've benefited tremendously from the university and from my relationships and friendships with the people there in the Athletic Department over the years, and I just wanted to show my appreciation and possibly stimulate others to dig deep and also give aid to the university."

To learn more about the Forward Together campaign and major gifts, contact Keith Carter at jkcarter@olemiss.edu, call 662-915-7159 or visit http://Givetoathletics.com.