skip to Main Content
Pharmacy alum, family give to Vaught Society/Forward Together 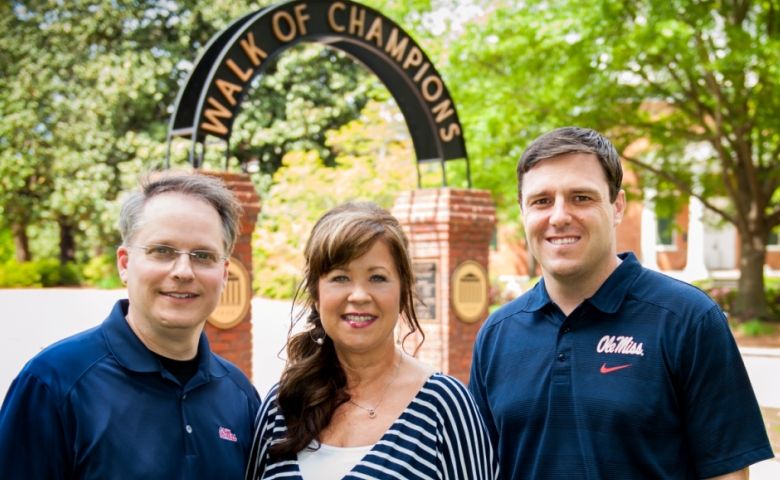 Steven and Kim Boatwright of Millington, Tenn., from left, visit with Evin Beck, director of development for the Ole Miss Athletics Foundation. The Boatwrights have provided a major gift to the Vaught Society/Forward Together campaign to help Ole Miss teams of all sports have a competitive edge.

“The University is respected. But Ole Miss is loved. The University gives a diploma and regretfully terminates tenure. But one never graduates from Ole Miss.”

This quote by Frank E. Everett Jr., which adorns the central stairwell of the Ole Miss Student Union, rings true for Steven Boatwright.

Boatwright, owner of Boatwright Pharmacy in his hometown of Millington, Tenn., found that he was able to feel connected to Ole Miss by supporting its programs. In fact, he began to provide financial support to the university within a year of graduation – a rare practice among recent graduates.

“It just shows that you don’t have to be fully established to give back to your university. Any amount can be utilized to support our programs,” said Keith Carter, senior associate athletics director for development and executive director of the Ole Miss Athletics Foundation. “I think I speak on behalf of the university in saying that we greatly appreciate both the Boatwrights’ history of support and their most recent gift to our campaign.”

Steven and his wife, Kim, a Delta State University graduate but Rebel fan nonetheless, recently committed a major gift to the Vaught Society/Forward Together Campaign in support of Ole Miss Athletics.

“I love Ole Miss. It’s part of me. It’s just a natural extension,” said Steven Boatwright, who has been a Vaught Society member for the past five years. “I’ve enjoyed being a part of that and wanted to continue that relationship. I’ve always wanted to give back to Ole Miss because it has given so much to me.”

Boatwright hopes his recent gift, combined with the financial support of other generous contributors, will help Ole Miss teams of all sports have a competitive edge.

“I want us to have a shot at a national championship in my lifetime. It’s my dream to see the Rebels play on that big stage,” Boatwright said, adding that he particularly wants the Ole Miss football program to excel under Coach Hugh Freeze. “We share a lot of the same values. He’s a man of faith. I know winning is a top priority, but I also respect how he impacts those young men’s lives spiritually and in a mentoring way and just helps them face life in general.”

Boatwright’s earliest memories are of watching Ole Miss compete on the gridiron in Vaught-Hemingway Stadium with his dad, Leroy A. Boatwright Jr., a 1949 pharmacy graduate, who also taught his children the importance of giving.

“My dad is one of the most generous people. He would literally give you the shirt off his back,” Steven Boatwright said. “Just this morning he gave me a tie. He’s just very generous. He is kind of like me – he works so much. One of the ways he showed his love for the university is through his generosity.”

“That’s a quality that Steven has exhibited in multiple areas of our life: school, church, even with customers,” Kim Boatwright added. “And it’s a quality that he’s passed down to our kids. We’re seeing them start to mimic that – and what a blessing. That legacy of giving was passed down from his mom and dad. They’re just very humble, generous people.”

After graduation, Leroy Boatwright worked at pharmacies in his hometown of Holly Springs and others across north Mississippi. He eventually moved to Memphis to take a job with Schering Plough. There he met his wife, the now late Peggy R. Boatwright, purchased a Millington, Tenn., pharmacy in 1957, and moved his family there. Steven Boatwright grew up working in the pharmacy along with his sisters, Laura and Emily, both of whom also graduated from Ole Miss with pharmacy degrees as did their husbands, Brent Smith and Brad Provence respectively.

“As a kid, we lived right down the street from the pharmacy and we literally grew up in the business,” Steven Boatwright said. “It’s the only thing I ever knew: be a pharmacist and go to Ole Miss. I didn’t know there was another school out there.”

Though their home was now in Tennessee, Leroy Boatwright continued to take his family to Oxford for games. Steven and Kim Boatwright have continued the tradition with their own children – Skipper, 25, Zach, 21, and Annalea, 18 – seeing as many home games as possible and several away games each season.

“Even though our kids did not attend here, Ole Miss continues to be a big part of our lives,” Boatwright said. “That stadium is like a second home to me; I’ve just been all over it. Over the years, you remember even where you were sitting at certain times, watching big wins, even losses. Watching players like Archie, Eli and Chucky Mullins. Last year, the Bama win was an awesome one. That stadium has so many memories … I’m one of those folks who’s there through the good times and bad times. I’m never one to leave the game early. I consider following Ole Miss football one of my hobbies.”

“That is your hobby,” said Kim Boatwright, recalling many Saturdays with her children as toddlers running around in the cool shade of the Grove’s majestic trees. “We plan our social life around it. What determines where we go for fall break is determined by the Ole Miss football schedule.”

Steven Boatwright agreed: “Ole Miss becomes a part of you and you become part of it over the years. There’s no place I’d rather be on a Saturday than inside the Vaught at a football game.”

To learn more about the Vaught-Society/Forward Together campaign, visit Forward Together; contact Keith Carter at jkcarter@olemiss.edu or call 662-915-7159.