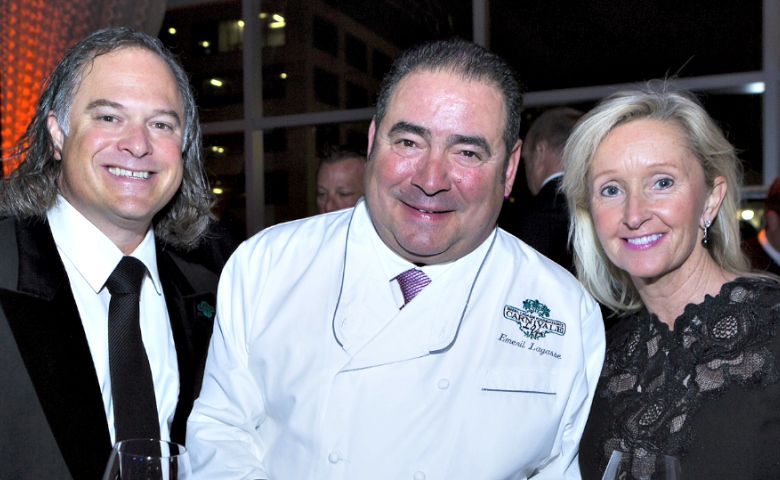 Brook and Pam Smith of Louisville, Ky., flank their friend Emeril Lagasse, well-known chef, restaurateur and author. The Smiths have contributed major support to the Southern Foodways Alliance in the University of Mississippi's Center for the Study of Southern Culture to create the Smith Symposium Fellows program.

The Smiths have made a recent $250,000 gift to create the Smith Symposium Fellows program, ensuring that individuals doing notable work in their early to mid-careers are able to participate in the symposia of the SFA, a non-profit institute found under the umbrella of UM’s Center for the Study of Southern Culture. Smith Fellows also contribute to a more diverse and progressive symposium community.

“There’s nothing Pam and I have ever seen that compares to the Southern Foodways Alliance,” Brook Smith said. “There are SFA members who are involved with food as careers and members who appreciate food and its culture. It’s an unmatched organization – what members are doing through this organization is making a difference.”

And the Smiths are among those making a positive impact. The first class of Smith Symposium Fellows was selected for their potential to transform the region and its foodways. In addition, a goal for the Smith Fellows is that they will benefit from involvement with the extended SFA community. The number of Smith Fellows annually named will eventually grow to 10.

The inaugural fellows are Michael Twitty, writer and historian of African-American foodways; Natasha Bowens, farmer, activist, and author of The Color of Food; Evan Mah, food editor of Atlanta magazine; and Darnella Burkett Winston, a farmer and a Mississippi Food & Health Fellow and National Rural Leader in the Rural Development Leadership Network.

“These women and men are at the forefront of their field,” said John T Edge, SFA director. “Through the generosity of Pam and Brook, we’re able to invest in their careers and in the future of our region. We’re humbled by this gift and determined to leverage their belief in our mission.”

“Education is at the root of everything,” Smith said. “That’s why these symposiums are so important. Think of it like this: If one person becomes involved in recognizing and maintaining our culture and that leads to the next ten people becoming involved, which leads to the next hundred people – that’s how the world gets changed. With this gift, Pam and I are helping others to the table.”

Pam Smith agreed, saying, “Growing up in the South – Myrtle Beach, Beaufort and Charleston – it is important that our three sons and their generation have a direct reference point to Southern tradition. The SFA has made me a believer that Southern culture, food culture and family culture will live on.”

A surety bond broker and president of Smith Manus, one of the nation’s largest surety bond agencies, Smith’s roots in food and wine run long and deep. Growing up he used his mother’s cookbooks to try his hand at cooking. Later, with several partners, he launched Post Parade, a Napa Valley cabernet blend. Across the years, with regular travel, mostly domestically, Smith became a passionate food advocate, checking out a wide array of offerings from the local barbecue joints to white tablecloth fine dining establishments.

“I was pounding the same trails as the SFA,” said Smith. “My path has crossed with so many different, interesting and fun people.” The businessman, who earned a degree in financial management from Clemson University, learned in 2003 that 610 Magnolia, an iconic Louisville restaurant was set to close, and he felt a calling to step up and purchase it, recruiting acclaimed chef Edward Lee from New York City’s SoHo neighborhood, to join him.

“It’s too special – I don’t want the place to close its doors,” Smith said he remembered thinking about 610 Magnolia restaurant. And that partnership led to the Smiths and Lee becoming SFA members, after they were invited to SFA’s “Taste of the South” event at Blackberry Farm in Walland, Tenn.

“John T. Edge has crafted an organization that is very well-run. For Pam and me, the decision to make this gift to the SFA was easy. We feel fortunate to be able to support such great work.”

Individuals and organizations interested in learning more about supporting the work of the SFA can contact Nikki Neely Davis at nlneely@olemiss.edu or 662-915-6678. Gifts also can be made online at www.umfoundation.com/makeagift or by mailing a checking with Southern Foodways Alliance in the memo line to the University of Mississippi Foundation, 406 University Ave., Oxford, Miss. 38655.

The Southern Foodways Alliance documents, studies and celebrates the diverse food cultures of the changing American South. The SFA sets a common table where black and white, rich and poor – all who gather – may consider history and the future in a spirit of reconciliation. A member-supported non-profit institute of the Center for the Study of Southern Culture at the University of Mississippi, the SFA sponsors scholarship, mentors students, stages symposia, collects and shares oral histories, and produces and publishes books, films and podcasts. For more information, visit www.southernfoodways.org and follow on Twitter @Potlikker.