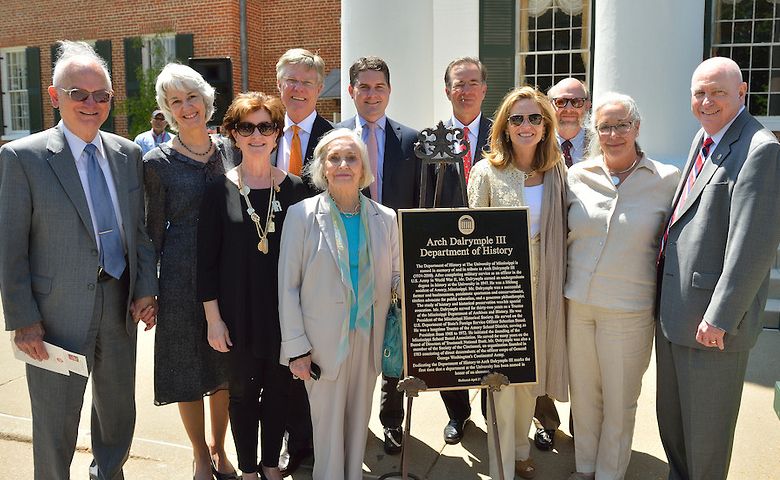 On hand to celebrate the naming of the Arch Dalrymple III Department of History at the University of Mississippi, front row from left, were Russell Whitehead, Martha Dalrymple Guffey, Kathleen Blair, Martha Dowd Dalrymple and Chancellor Dan Jones; back row, Elbert Hilliard, Jane Dalrymple-Hollo, Cary Whitehead, Woodson Whitehead, Robert Blair and James Cummins. This is the first department on the Oxford campus named for a distinguished alumnus.

The late Arch Dalrymple III would likely have become a history professor, except that his father’s untimely death kept the young University of Mississippi (UM) graduate at home to run the family’s businesses and take care of his mother and younger sisters.

Dalrymple first came to the university in the early 1940s, left to serve as an officer in the U.S. Army during World War II and then returned to earn an undergraduate degree in history in 1947. While he was in the service, he earned college credit from Amherst College and Cornell University.

As the Amory, Miss., native developed into a highly successful businessman and widely respected civic leader, Dalrymple found avenues to pursue his love of history and contribute to his state’s historic preservation efforts, including 32 years as a trustee of the Mississippi Department of Archives and History (MDAH). He also served as president of the Mississippi Historical Society in 1976-77.

“Daddy was passionate about history. One of his final wishes before his death in 2010 was that an endowment be created at the University of Mississippi Department of History. He always felt our lives are shaped by the lessons we learn from history,” said Martha Dalrymple. “Daddy was a part of the ‘greatest generation’ that instilled in him the value of a strong work ethic and the importance of giving back to his country, state and community. Our family has had a long history with the University of Mississippi, and I am pleased to give back to honor his name.”

UM Chancellor Dan Jones and Martha Dalrymple unveiled a large bronze plaque to be installed in Bishop Hall, home to the history department.

“This is truly a great day in the life of the University of Mississippi,” the chancellor said. “We are extremely proud for our Department of History to bear the name of such a brilliant man, a dedicated scholar and influential leader. When students, faculty, visitors and others see the Arch Dalrymple name, we want them to be inspired by his deep commitment to history and historic preservation and by his tremendous commitment to service. Our state is stronger because of Arch Dalrymple, and now his alma mater is stronger because of this gift made in his memory.”

Previously, in 1986, Arch and his wife, Adine Lampton Wallace Dalrymple, had funded the Dalrymple Lecture Series in Mathematics at UM to bring distinguished speakers in mathematics to campus. “To Daddy, history and math were the two most important areas of study needed to strengthen our great nation. One of his favorite quotes was that of Winston Churchill – ‘The farther back you can look, the farther forward you are likely to see,’” Martha Dalrymple said.

Holmes Adams of Jackson, Miss., Arch Dalrymple’s attorney and friend for more than 25 years, spoke to the fitting nature of his name being permanently linked with the university and the study of history.

“It is appropriate to name the Department of History for Arch Dalrymple because he was a true amateur historian in the classic sense of the word ‘amateur,’ that is, one who engages in a study, sport or activity for pleasure, not for financial benefit or professional reasons. If my memory is correct, the word ‘amateur’ derives from the Latin verb ‘amo,’ or ‘I love.’ Arch loved the study of history – of his home community, his state, his country and the world.”

That love and dedication can be seen through his work with MDAH, the comprehensive historical agency that collects, preserves and provides access to the archival resources of the state; administers museums and historic sites; and oversees statewide programs for historic preservation, government records management and publications, said Elbert Hilliard, MDAH director emeritus, who worked with Arch Dalrymple for three decades.

“Arch Dalrymple was a man of great courage and integrity. He stood with the MDAH staff and provided invaluable support for the department’s administration and implementation of the State Antiquities Act that was enacted by the Mississippi legislature to help preserve our state’s historic sites and buildings for future generations,” Hilliard said. “Mr. Dalrymple had a great love of history and was a MDAH trustee whom you could count on to stay abreast of issues related to the department’s mission.”

Joseph Ward, chair of history, expressed appreciation for the naming of the department and the infusion of new resources, which will be held in a permanent endowment.

“Martha Dalrymple’s decision to honor her father in this way will be a lasting benefit to the Department of History's faculty and students. It will enhance research and teaching in every area of historical scholarship we offer. The confidence that Ms. Dalrymple has shown in our faculty and students through her incredible generosity will provide great encouragement to our work both now and far into the future.”

The endowment at the state’s flagship university now stands at approximately $600 million, and endowed gifts, such as Dalrymple’s, provide the margin of excellence in academics. “This magnificent gift provides a permanent tribute to the extraordinary life of Arch Dalrymple,” said Deborah Vaughn, senior executive director of development and chief development officer. “In addition, this significant investment will have a far-reaching impact on the lives of our history students and faculty, as they pursue meaningful study and research.”

Former Mississippi Gov. William Winter was a college classmate and longtime friend with the honoree. “This is a highly important and timely recognition of one of Ole Miss’ most distinguished alumni. Arch was a dedicated and highly informed historian, who developed much of his interest in history as a result of his study under the great history professors who were a part of the Ole Miss faculty when we were there together in the 1940s. The importance of the study and knowledge of history was passionately felt by Arch, and he did much to advance that cause in our state.”

Dalrymple’s business interests included farming, timber, cattle, commercial and residential real estate, and oil and gas. He was a passionate sportsman and conservationist, tireless advocate for public education, and a generous philanthropist. He created the Dalrymple Family Foundation to benefit the arts, culture, education, humanities and conservation in Northeast Mississippi. Martha Dalrymple serves as president of the foundation. Her husband is James L. Cummins, the executive director of Wildlife Mississippi.

Arch Dalrymple served on the U.S. Department of State’s Foreign Officer Selection Board, the Mississippi Economic Council and as the first chairman of the Amory City Planning Commission. He was a longtime trustee of the Amory School District, serving as president from 1968 to 1972, as well as a design advisor for construction of the Amory Middle and Elementary schools. He initiated the founding of the Mississippi Schools Board Association and was a member of the Mississippi Governor’s School Finance Study Group.

He served for many years as a director on the Trustmark National Bank board. He was also a member of the Society of the Cincinnati, an organization founded in 1783 consisting of direct descendants of the officer corps of Gen. George Washington’s Continental Army. At his alma mater, he provided guidance on the School of Engineering Advisory Board, as well as the Ole Miss Alumni Association Board.

Widely read in history, government, economics and foreign affairs, Dalrymple was admired as an amusing and knowledgeable storyteller. He wrote six volumes of family history for his three daughters – Martha Dalrymple of Amory, Mary Cameron of Oxford and Jane Dalrymple-Hollo of Boulder, Co. – three grandchildren and his extended family. Mary Cameron, her husband, Alan, and their daughter Adine, all graduated from Ole Miss.

In one of the volumes Arch Dalrymple wrote about family trees: “Assembling charts and dates is really pretty dull stuff. More interesting and instructive is learning just who the people were – how they fit into the time stream of history and the fabric of the society in which they lived – in short, to put a name, an individual in historical context. Only then does the ‘tree’ come to life.”

Arch Dalrymple’s sisters, the late Jane Whitehead of Memphis, Tenn., and Martha Guffey of Dallas, Texas, are both Ole Miss alumna. Guffey said she believes under different family circumstances her brother would have become a history professor, making the naming of the history department very meaningful.

“Arch would have been very pleased,” she said of the announcement. “He had a good experience at Ole Miss, and history professor Jim Silver was a favorite of his, as well as others.”

A connoisseur of architecture and landscape design, Dalrymple also traveled extensively in Europe with his beloved wife, “Deanie,” and was particularly fond of visiting Scotland, where he cultivated many friendships. The Dalrymples were members of the First Presbyterian Church of Amory.