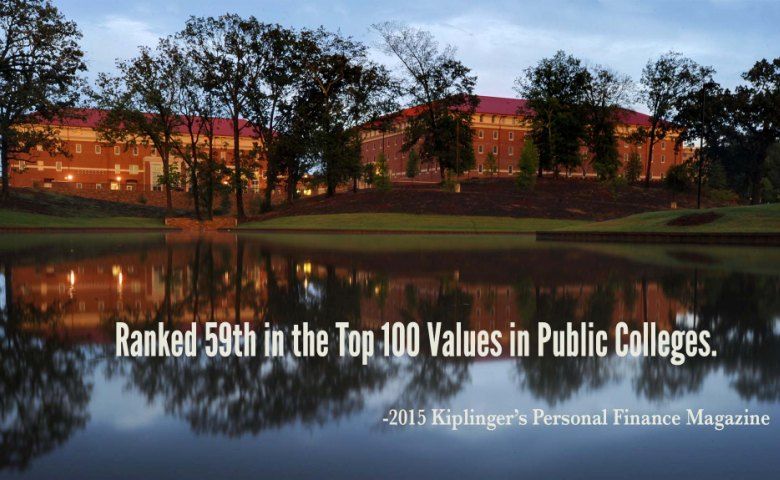 For the second straight year, the University of Mississippi has been named among the nation’s best values in higher education.

The editors of Kiplinger’s Personal Finance magazine placed UM on its “Top 100 Values in Public Colleges” list for 2015. The university is ranked No. 59, up from last year’s No. 78 position. Other SEC institutions that made the list are Florida (No. 3), Georgia (10), Texas A&M (25), Alabama (44), Arkansas (58), Tennessee (78) and Auburn (88). Millsaps College (No. 77) is the only other Mississippi institution to make Kiplinger’s rankings, on its “Top 100 Values in Liberal-Arts Colleges” list.

“When you look nationwide, the University of Mississippi stands out as a university with outstanding academic programs at a price substantially below similar universities, with the bonus of offering an outstanding collegiate experience,” said Morris Stocks, provost. “The fact that the University of Mississippi was named to this prestigious list is further confirmation that we are providing nationally recognized quality education.”

Kiplinger’s process in naming Best Values relies on data submitted by the colleges and universities. Non-U.S. schools and specialty schools, such as military academies, medical specialty schools and art schools, are not included. The list is narrowed down to the most selective universities, based on entrance exam scores of the 2014 freshman class.

To further reduce the list, additional quality measures are reviewed, including four- and six-year graduation rates, the number of freshmen who return as sophomores, student-faculty ratios, how much each college spends per student on instruction and how much each spends on maintaining library resources.

As state funding has declined, college tuition has soared nationwide. But Ole Miss has several programs to help ease the costs of higher education for families. For example, the university and the Lucky Day Foundation annually award hundreds of Luckyday Scholarships, ranging from $2,000 to $7,000 a year.

Luckyday scholars Jakira Davis and Gabrielle Matthews said they wouldn’t have been able to attend Ole Miss without the scholarship.

“Not only has it been a huge financial relief to me, allowing me to be able to afford college, but the fund has truly given me a second family away from home,” said Davis, a senior English major from Shelby who plans to attend law school. “There have been tons of other times when the directors have shown how much they care about the success of the students. They give us scholars so much and invest in us, not only the funds but also their time.”

“Luckyday has helped me to remain disciplined and focused because there is always a support system for when life gets tough,” said Matthews, who aspires to become a certified public accountant before entering the corporate world. “All of the staff genuinely cares about the students and it is a great feeling to know that someone is always in your corner.”

Private support is also a critical factor in the university’s surge in standing among American universities, said Wendell Weakley, president and CEO of the University of Mississippi Foundation.

“Even as the nation and other large institutions in our state see enrollment declines, the demand for entrance at the state’s flagship institution has never been higher,” Weakley said. “This is due in large part to the investments that donors have made and continue to make in this great university.”

Recently, the university announced that its private fundraising netted $118 million in fiscal 2014, the third straight year of more than $100 million in total support. Combined return was 16.4 percent, with global assets increasing more than 14 percent for the fiscal year.

“These gifts are essential to delivering on our promise to Mississippi of national leadership in higher education and service programs that advance our state,” Stocks said. “The rewards of these donations can be seen in our top faculty and staff, our national rankings and honors and the educational opportunities offered at the University of Mississippi.”

For more information on the Kiplinger’s reports, click here.