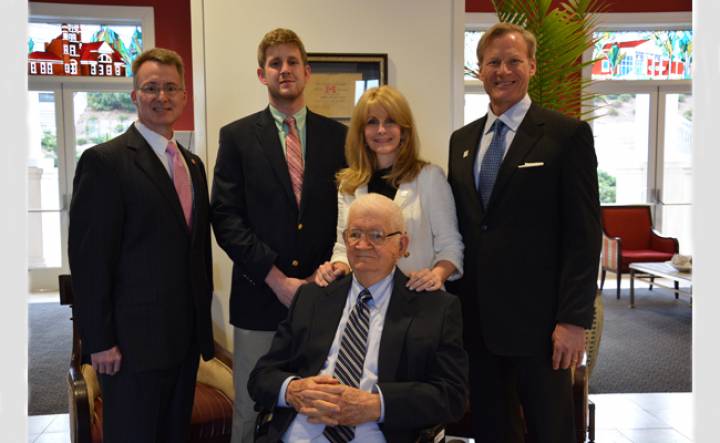 Walter J. Pierron Jr. has a longtime appreciation for the School of Pharmacy at the University of Mississippi.

“I have many fond memories from the pharmacy school,” said Pierron, a 1954 graduate and Monroe, La., native. “I made a lot of friends with the faculty and students. The university has an atmosphere that is so enjoyable, and that’s one of the things I remember most.”

In honor of that appreciation, Pierron’s daughter and son-in-law recently established a scholarship in his name. Their $25,000 gift created the Walter J. Pierron Jr. Pharmacy Scholarship Endowment for pharmacy students.

Recipients of the Pierron Scholarship will be full-time students in their final year of the professional pharmacy program who excel academically, demonstrate qualities of leadership and conduct community service.

“Dad has always spoken of his time at Ole Miss as some of the best years of his life,” she said. “He loves young people and has been a mentor to so many pharmacy students.”

Pierron’s love of the pharmacy profession began in high school while working at a local pharmacy. After graduating from Ole Miss, he worked for 45 years as a pharmacist in Louisiana. He also taught at the University of Louisiana-Monroe School of Pharmacy for 14 years. He was president of the Louisiana Pharmacists Association and served on the state’s Board of Pharmacy.

Recently, Pierron attended his 60-year class reunion at the UM pharmacy school’s annual Alumni Weekend and was pleased to reconnect with a handful of his former classmates.

“We’ve been friends a long time, and we stayed in touch over the years – mainly through the pharmacy school,” he said. “I was in the Air Force with Clovis Burch. We go way back.”

David D. Allen, the pharmacy school’s dean, said he has enjoyed phone conversations with Pierron and was “delighted to finally meet him in person” at the event.

“It’s obvious that he has a genuine passion for the University of Mississippi and our school,” Allen said. “I am so thankful for his family’s generous gift. Education is our top priority, and this scholarship will provide many new opportunities for pharmacy students.”

“Since I’ve known him, he has been interested in pharmacy and particularly pharmacy students,” Patrick said. “He’s also been interested in continuing education and other matters related to pharmacy. We wanted to do something in his honor, and we thought this would be an appropriate way to do that.”

For Pierron, it was an emotional gift.

“I’ve always been involved in academics because students are so important,” he said. “This scholarship means a lot to me. The university does a great job, and it’s always been a place I’ve been proud of. It just does something to you.”

To contribute to the Walter J. Pierron Jr. Pharmacy Scholarship Endowment, mail a check made payable to the University of Mississippi Foundation with the fund noted in the memo line to the UM Foundation, 406 University Avenue, Oxford, MS 38655. Online gifts can be made at http://www.umfoundation.com/makeagift. For more information, contact Raina McClure, director of development, at 662-915-6967 or rmcclure@olemiss.edu.