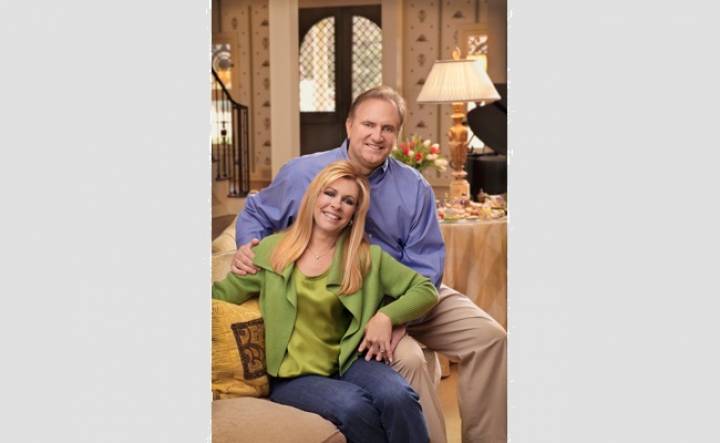 Ole Miss alumni Sean and Leigh Anne Tuohy have been honored with the naming of the Tuohy Basketball Center on campus. Sean Tuohy played for the Rebels basketball team from 1979-82, setting several records. They are parents to daughter Collins Tuohy and sons Sean "SJ" Tuohy, Jr. and Michael Oher. The couple continues to provide major support to Ole Miss Athletics, most recently to its Forward Together campaign.

Thanks to the extraordinary contributions of Sean Tuohy of Memphis, Tenn., and his family to the Ole Miss Athletics Foundation’s Forward Together campaign, Ole Miss Athletics has renamed the Basketball Practice Facility the Tuohy Basketball Center, athletics director Ross Bjork has announced.

The 51,000-square-foot facility, which serves as the practice home for both the Ole Miss men’s and women’s basketball teams, opened in January 2010. Considered one of the premier basketball practice facilities not only in the Southeastern Conference but also in the entire country, the facility is now named after one of the program’s all-time greats.

“Ole Miss is eternally grateful to Sean and Leigh Anne for their lifetime of contributions to our athletics program, and now generations of student athletes to come will know the values that represent the Tuohy family,” Bjork said. “Just like the Manning Center, the basketball practice facility was void of an official name, and now with this announcement, we have two of the great names to ever wear the red and blue on our facilities, which will serve as a source of pride for Rebel Nation. I have truly enjoyed building a strong relationship with Sean and Leigh Anne, and we can’t thank them enough for their new donation to support the Forward Together campaign. We are excited to honor them in this special way.”

“Leigh Anne and I have been blessed to have experienced the values instilled in the life lessons afforded to student athletes,” said Sean Tuohy. “We have passed down to our three children those same lessons and values. Our hope is that the legacy left with the Tuohy Basketball Center is one that will continue to teach those lessons to future students who come through the doors. Nothing would make our family any prouder than in 50 years from now when a future little Rebel is walking across campus with his Dad and ask what is a Tuohy? His father will reply a Tuohy is a proud member of the Ole Miss family that, when given opportunity, gave not only with a happy heart and loving spirit but with the expectation that the next generation will rise to the challenge and aspire to make the same difference.

“If you had told me when I was attending Ole Miss that one day a building would bear the Tuohy name, I would have told you it would have to be due to graffiti and someone please call the Physical Plant for cleanup. In all seriousness, it has been a pleasure working with Ross and (Foundation Executive Director) Keith (Carter) on this endeavor. Leigh Anne, Collins, Michael, SJ and I want to thank the Ole Miss family for always having our backs, being there for us and believing in us.”

Tuohy, who played for the Rebels from 1979-82, is the SEC all-time assists leader with 830, and his 260 assists as a sophomore are an SEC single-season record. In September 1998, Tuohy was inducted into the Ole Miss Athletics Hall of Fame.

In his career, Tuohy earned All-SEC honors three times and guided Ole Miss to three consecutive postseason appearances for the first time in school history. He served as team captain for three years, including during the 1981 season in which the Rebels captured the SEC Tournament championship and became the first Ole Miss team to advance to the NCAA Tournament. A member of the All-SEC Academic Team, Tuohy was named to the 1981 SEC All-Tournament team as a junior.

The Tuohy Basketball Center, located on the corner of Coliseum Drive and Hill Drive, includes individual practice courts for the men’s and women’s teams, shared weight and training rooms, separate film rooms, team lounges, locker rooms and staff and coaches’ offices, among many other amenities.

“The generosity of the Ole Miss family never ceases to amaze me,” men’s head coach Andy Kennedy said. “Sean Tuohy holds the school record for most assists, and his latest assist is his best one yet. We can’t thank Sean and Leigh Anne enough for all that they have and continue to do to help our great university. Our program will take great pride in preparing to compete for championships in the Tuohy Basketball Center.”

“We’re honored that Sean and Leigh Anne Tuohy have decided to add to the Ole Miss basketball legacy,” said women’s head coach Matt Insell. “I couldn’t be prouder that our staff and players will be able to work and practice in a building named after a family who have provided so much for our university and our athletics department.”

After his career at Ole Miss, Tuohy founded RGT Management, Inc., and has served as its president ever since. A franchisee with Yum Brands, Tuohy’s company currently owns and operates over 90 restaurants located in seven states, including Taco Bell, Pizza Hut, Kentucky Fried Chicken, Long John Silvers and A&W. He also serves as a TV analyst for the NBA’s Memphis Grizzlies.

Sean and Leigh Anne, an interior designer and motivational speaker, are the proud parents of one daughter, Collins, and two sons, Michael Oher and Sean Jr.

Along with being an Ole Miss varsity cheerleader, Collins served as the president of the Student Alumni Council and Student Spirit Committee and was an officer for the Kappa Delta Sorority. She is now the director of sales and marketing and co-owner of Whimsy Cookie Company.

Michael Oher, who was a first team All-American left tackle for the Ole Miss football team from 2005-08, was a first-round draft pick by the Baltimore Ravens, where he won Super Bowl XLVII, and now plays for the Tennessee Titans.

Sean Jr., is a guard on the Loyola (Md.) basketball team and is entering his sophomore season with the Greyhounds.

The Tuohy family was the subject of Michael Lewis’ 2006 book The Blind Side: Evolution of a Game, and the subsequent film adaptation, The Blind Side, in 2009. For more information on supporting Ole Miss Athletics, visit www.forwardtogetherrebels.com.