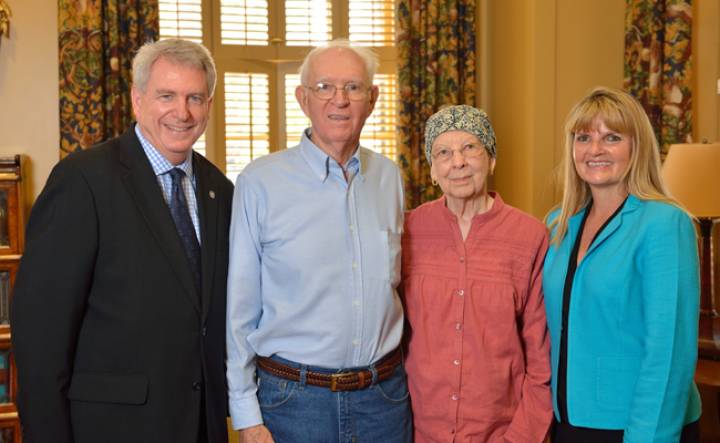 Winston "Cape" and Barbara Caperton of Warrenton, Va., were recently invited by Chancellor Dan Jones to attend a UM football game in gratitude for their lifelong support and establishment of the Barbara Caperton Ole Miss Women's Council Scholarship Endowment.  A Noxapater, Miss., native, Cape Caperton is a UM alumnus and supporter, both financially and spiritually.

"I've said many prayers for you, Chancellor, because you have had trying times in the past during your leadership and I've admired how you've handled them," Cape Caperton told Dr. Jones.

"I appreciate that," Jones said. "I knew when I took this job we would have some trying moments – but they are also teachable moments. That's part of life for a university. Thank you for your prayers – and please don't stop."

The Capertons, accompanied by their son and daughter-in-law, Chris and Rebecca Caperton also of Warrenton, Va.,  assured Chancellor Jones that their thoughts would continue for his administration.

The Capertons' visit came as they were dedicating additional funds to the scholarship endowment they first pledged back in 2007. As part of the Ole Miss Women's Council (OMWC), the Caperton scholarship helps provide tuition and books for young men and women, as well as guidance and training in leadership skills, career development, and personal growth throughout the student's tenure at the university. As part of their visit, the Capertons took Chris and Rebecca to see the plaque in the OMWC Rose Garden that bears his mother's name.

Chancellor Jones and the Capertons enjoyed visiting and swapping stories about their shared experiences as Baptist missionaries, raising families, and the importance of scholarship opportunities.

"When you give to scholarships, you're really giving to us two ways: You're helping us recruit and bring fine students to the University of Mississippi, and then those funds also help support our academic programs and faculty as well," Jones shared with his guests. "It moves us forward."

"I realize working your way through school is not like it was when I did it," Caperton said. "Our scholarship was intended for a Noxapater graduate because I have a particular affinity for my hometown. When the time came to award the scholarship, there wasn't a viable candidate from Noxapater. So we had a backup plan, and as the scholarship is in honor of my wife, we indicated that we'd like it to go to a nursing student."

The Capertons were pleased to have met the first recipient, Mia Kloth of Greenville, Miss. "She's a lovely young lady and an excellent student," said Barbara Caperton. "It's so nice to put a person's face to something you believe in and have worked hard to do."

"We never dreamed that we'd be able to do something like this, as we aren't people of wealth," added Cape Caperton. "We made a nice investment, and by selling some land this opportunity to give back was afforded to us. We had a good estate planner helping us through United Services Automobile Association (USAA), my former employer, and they've provided matching gifts to the endowment as well."

Like many of his generation, Cape Caperton grew up on a farm and graduated from a small class of only 14 from Noxapater High School in 1946. After attending Hinds Community College for two years, Caperton transferred to UM and put himself through school, borrowing $1,000 to make it possible. Graduating with a business degree in 1950, he entered the Air Force and met Barbara, a nursing student at Trinity University from Mercedes, Texas, while teaching at the Officer Training School in San Antonio. The two married after Barbara completed her program.

The Caperton family embodies the Ole Miss spirit: family, hard work, commitment and service. Working hard to maintain careers and raise two children, the family moved frequently, living in Texas, Oklahoma, Wisconsin, Georgia and then back to San Antonio as Cape transitioned from Sentry Insurance to USAA. Barbara was a full-time mother and part-time nurse for many years, then began as a full-time school nurse when her children were older. The Capertons then began planning the next stage in their lives – giving back.

Retiring in 1986, the Capertons each fought battles with cancer. Finally healthy in 1990, they were able to begin the journey they had been planning for so long. On behalf of the International Mission Board, they embarked on a lengthy mission to Israel, followed by several years of rewarding short-term mission travel.

During those 10 years, the Capertons saw their daughter and son marry their spouses in a double wedding and head to Washington, D.C., to pursue careers in public service. Wanting to be closer to family and grandchildren, the Capertons sold their retirement land near Jackson, Miss. in favor of a place in Virginia. Wise retirement investment and a little good fortune in real estate allowed for the additional opportunity to give back for the Capertons, this time financially. Selling the land allowed them to make generous gifts to both the International Mission Board and their scholarship endowment at UM.

"I wanted the scholarship to be in Barbara's name because she's been so supportive of me and my interests in Ole Miss – the campus, football and the university," said Caperton. "We like coming back here. The changes are amazing, but the people here don't change – there's always been a strong camaraderie. I like what Frank Everett once wrote – you graduate from the university but one never graduates from Ole Miss. That's the heart of it."

Debbie Vaughn, UM senior executive director of development, has forged a special relationship with the Capertons. "Since our first meeting in 2007, Cape and Barbara have become close friends of mine, prayer warriors, even. I am so honored and privileged to work with this special family who has not only committed so much of their time to helping people around the world, but also sacrificed much of their life savings in an effort to continue that commitment to service. They are truly two of the most giving people I've ever met."

The Capertons thanked the chancellor for his time.

"Thank you for all you have done," said Jones. "Your lives of service are commendable, and the university thanks you for all you do for us. This scholarship in Barbara's name represents a legacy for your family here, transforming lives and granting greater access to higher education."

Barbara Caperton summed up the visit perfectly. "Cape never promised me a rose garden, but now I have my name in one."

The Barbara Caperton OMWC Scholarship is open to receive gifts from individuals and organizations by sending a check with the fund noted in the memo line to the University of Mississippi Foundation, 406 University Avenue, Oxford, MS 38655; or visiting www.umfoundation.com/makeagift.  For more information on establishing an OMWC Scholarship, contact Sarah Hollis, associate director of University Development, at 662-915-1584 or shollis@olemiss.edu.