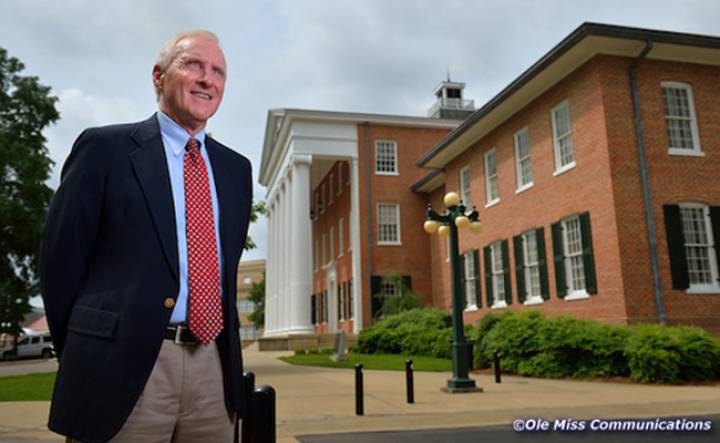 The legacy of beloved educator and leader Andy Mullins, who recently retired as University of Mississippi chief of staff after almost 20 years of service, is being honored with a scholarship endowment to provide support for the state's future leaders of educational reform.

The Andrew P. Mullins, Jr., Scholarship Endowment will award scholarships to highly qualified education majors who have the potential to significantly enhance educational systems throughout Mississippi. Individuals and organizations are encouraged to provide gifts to build the endowment.

Mullins has dedicated his career to improving K-12 and higher education, serving as longtime counselor to many of Mississippi's education leaders and strengthening Ole Miss.

"Andy Mullins has been untiring in his career-long commitment to education, whether as a classroom K-12 teacher, a college professor, an author, a highly respected adviser or an innovator focused on giving Mississippians a better chance at success through better education," UM Chancellor Dan Jones said. "His career accomplishments have been truly extraordinary, but just as important has been the example he set for those who choose a career in public service. He set incredibly high goals, and he was unswerving in his commitment to achieving them."

Mullins now is teaching graduate students in the university's School of Education and leading the Mississippi Teacher Corps, which he co-founded with Harvard journalism student Amy Gutman in 1989.

Mullins taught high school for eight years, was special assistant to two governors and three state superintendents of education, and as a member of Gov. William Winter's staff, was one of the "Boys of Spring," the Winter team that helped engineer the landmark Education Reform Act of 1982.

Since joining the Ole Miss administration in 1994, Mullins worked with three chancellors during a period of significant enrollment growth, dramatic changes in the funding of higher education, and the university's biggest public event ever, the 2008 presidential debate.

"Over my career, I've had the opportunity to work with some of Mississippi's greatest leaders – William Winter, (Chancellor Emeritus) Robert Khayat, (former state Superintendents of Education) Dick Boyd and Tom Burnham, (former Chancellor) Gerald Turner and Chancellor Dan Jones," he said. "These individuals were far more than great leaders in education; they are great examples of leadership for any organization. There are very few people who've been as fortunate as I have to work with such transformational people."

But many of those leaders insist they never could have accomplished their signature works without Mullins' contributions, often behind the scenes.

"Andy Mullins is one of the most creative and visionary teachers and public servants I have ever known," said Winter, who asked Mullins to join the governor's staff. "I leaned on him heavily when we were developing the Education Reform Act of 1982 and getting it passed. He just had a special way of relating with members of the Legislature."

Mullins also worked with Tom Burnham, who served two terms as state superintendent of education, with a stint as dean of the UM School of Education sandwiched in between. Burnham marvels at Mullins' relationship-building skills with the state's policymakers.

"There's no way to really capture the extent to which Andy influenced policy in this state, based on the relationships he's built over the years," he said. "The critical issue when you work in the Capitol is your reputation, and Andy has one of the best.

"The relationships Andy built enabled him to get legislation passed that might not have gone through otherwise, and they allowed him to stop bad legislation that might have gotten passed. That may be even more important."

Those relationships were crucial in the late 1990s, when the university sought to sell 23,000 acres of forestland in south Mississippi to the U.S. Forest Service, Khayat said. Mullins, working as special assistant to the chancellor, helped persuade skeptical lawmakers to approve the deal, which provided $40 million for an endowment to help build, repair and renovate campus buildings.

Mullins also had relationships throughout the state's education community that came into play early on during Khayat's administration.

"I was so fortunate when I became chancellor that Andy was already on the staff," Khayat said. "If he had not been, I would have tried to find him. Andy knows as much as anybody in Mississippi about K-12 education, and he is universally respected. Some people may not agree with him about some things he believes about public education, but they understand and respect him."

Between 1991 and 1995, the university's enrollment had declined by some 1,000 students. When Khayat became chancellor in 1995, he quickly set about shoring up the university's student recruitment efforts, scholarship programs and academic image. As part of this work, he and Mullins personally visited more than 60 schools during Khayat's first two years on the job.

"(The debate) turned into a two-year task, but it was right down my alley. It involved working with a national organization, navigating the political waters here in the state, and mobilizing the university's resources and people to see just what we could accomplish. It was a great experience," Mullins said.

The debate was a resounding success for Ole Miss, drawing international media to campus and helping spawn coverage of and praise for the university's academic rise and its efforts to promote access and diversity in higher education. The Commission on Presidential Debates asked Mullins to consult with some of the host sites for the most recent debates.

But Mullins' enduring legacy, Winter said, will be his "commitment and contributions to the advancement of public education in Mississippi, especially including his work in passing the Education Reform Act of 1982, creating and directing the Mississippi Teacher Corps and the Principal Corps, and his inspiration in leading Mississippians to value public education."

Mullins has already helped train and place more than 500 teachers in school districts across the Delta and north Mississippi through the Teacher Corps.

"It's been 19 eventful, wonderful years," he said. "I've had the chance to be involved in the renaissance years here, helping with the transformation of Ole Miss from a small regional school to a modern, international university. I wouldn't trade any of it for the world."

Individuals and organizations can support the Andrew P. Mullins, Jr., Scholarship Endowment by sending a check with the fund noted in the memo line to the University of Mississippi Foundation, 406 University Avenue, Oxford, MS 38655 or online at www.umfoundation.com/makeagift. For more information about giving to the fund, contact Sarah Hollis, associate director of development, at 662-915-1584 or shollis@olemiss.edu.